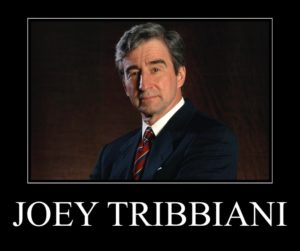 Chan Man Quip of the Week – [The Knockout] Chandler pauses and not having anything to lose with Joey’s non-English speaking Grandmother, drops the hammer with, “So, you’re old and small.” [The Setup] The gang is hanging out at Monica and Rachel’s apartment watching the episode of Law & Order that Joey is supposed to make an appearance in playing a criminal with his biggest fan (his grandmother who doesn’t speak English). Joey has already realized that his scene was cut from the episode but doesn’t have the heart to tell his grandmother and is trying to figure out what to do. Meanwhile, Chandler and Monica have been arguing about flirting with other people. Sitting next to Monica on the couch, Chandler is clearly stewing about the flirting issue. He asks her, “So uh Monica, do you, do you like the Law & Order?” Monica responds, “Yeah, it’s good.” Having properly set her up for his condemnation, Chandler loads up the snark by telling her, “See, I’m finding out all this stuff about you today, like you like the Law & Order and that you flirted with every guy in the Tri-State area!” Monica protests, “Chandler!” Joey and his grandmother immediately shush her for being too loud while they’re trying to watch the show and wave her and Chandler away. They get up and go in the kitchen and once they’re away from the television watchers, Monica continues, “Okay, let me get this straight, it’s okay for you to flirt, but not for me.” Chandler responds, “Oh, I’m so glad we cleared that up. Look, I’m sorry, some things are different for men and for women.” Monica sarcastically encourages him to keep digging his own grave, instructing, “Go on, teach me something about men and women.” Impervious to her sarcasm, Chandler goes for broke, saying, “Okay, I’ve already taught you so much already, but whatever. See when you flirt with a guy you think, ‘I’m just flirting, no big deal.’ But the guy is thinking, ‘Finally! Somebody who wants to sleep with me!'” Skeptical, Monica reacts with, “No way!” Convinced of his own wisdom, Chandler reaffirms, “It’s true.” Monica responds, “Well that’s pathetic!” Showing a little compassion, Chandler agrees, “Again true.” Monica asks, “And this goes for all guys?” Chandler answers, “All guys that are awake. Then we go to sleep and then all the guys from the other end of the world wake up and behave the exact same way.” At this point their conversation is interrupted by Joey coming into the kitchen to talk to Ross. Joey informs him, “All right, it’s another commercial; I still haven’t told her!” Ross checks his watch and responds, “Joey! This is like the last commercial. You’ve got like ten minutes left!” Starting to panic, Joey blabs, “I know, I know! What am I going to do?” He pauses for a moment to think and then says “Ooh” to indicate that he’s come up with an idea. Overhearing this and reading Joey’s mind, Monica informs him, “No! You are not gonna run out and leave her here!” Dejected that his idea has been squashed, Joey passively agrees, “Yeah, all right.” He then pauses again to think and then says “Ooh” again before darting out of the apartment. Joey’s grandmother notices him leaving and yells from the living room, “Joey!” Chandler runs interference by going up to Joey’s grandmother and saying, “Uh, Joey is gonna be right back. Right back!” He gestures as he’s speaking in an attempt to overcome the language barrier. He then continues, “Meanwhile, let’s-let’s-let’s talk about you.”

Recap in the Key of Phoebe – This is the one where Joey haphazardly records himself kidnapping the duck in his apartment in order to fool his grandmother into thinking it was his appearance on Order and Law, Rachel takes pity on Ross’s inability to flirt and gets Caitlin’s phone number for Ross, Phoebe is fascinated by Ross’s ‘adding smell to gas’ flirting and asks him what else they add smell to, Monica isn’t mad about Chandler flirting because she flirts with guys all of the time, Ross has a crush on Caitlin so he rats Chandler out to Monica for flirting with her and then orders extra pizzas to get her number with his own flirting but ends up flirting with her about how gas smells, Chandler flirts with “the hot pizza delivery girl” Caitlin, and Joey invites his Grandmother over to Monica and Rachel’s apartment to watch his appearance on Law & Order.

In the flirting disagreement between Chandler and Monica, I’m conflicted on whose right and whose wrong. On the one hand, it’s completely unreasonable of Chandler to believe that it’s okay for him to flirt but not for Monica. After almost 11 years of marriage, I’ve been through enough fights to know that double-standards are not healthy or productive. On the other hand, Chandler’s not wrong about how completely pathetic the inner-workings of your typical heterosexual male’s mind is. It brings me no pleasure to confirm that what he’s saying is true. Anytime a woman flirts with a heterosexual male, like clockwork the thought, “Hmm, maybe she wants to sleep with me,” pops into his head. Don’t panic, heterosexual female readers. I promise you there are plenty of stand up guys out there who, if they are in a committed monogamous relationship, would never act upon the thought (I’m including myself among these stand up guys) but unfortunately, even for the best of us, the thought does indeed enter our minds. So when Chandler tells Monica that even though she thinks it’s innocent and doesn’t mean anything when she flirts with guys, he’s right about the fact that the guy on the receiving end of Monica’s flirting is thinking, “cool, I think she might want to sleep with me.” In the end, though, I still think Chandler’s double-standard that he should be allowed to flirt and Monica shouldn’t is unreasonable. Just because the guys that Monica is innocently flirting with are thinking about the prospects of sex and the women that Chandler are flirting with may be less inclined to have the same thoughts, it’s still a double-standard that is unfair to Monica. Regardless of what the other party is thinking, if Chandler and Monica are in a committed relationship, they are equally in control of both their own actions and their ability to trust the other. Therefore, the only fair agreement to come to is to either agree that they’re both allowed to flirt or they are both not allowed to flirt. Ultimately, having a double-standard is unhealthy for the relationship. Well class, now that I’ve settled Monica and Chandler’s disagreement and used it to pass along important and wise relationship advice, I think my work here is done for today. Hope you all have an awesome week and I’ll catch up with you next Monday…same smelly cat time, same smelly cat channel. Late.
​
Howdy, Big FRIENDly Giants. Hope everyone who celebrates it had a great Easter Sunday, yesterday! Mine was nice and relaxing, thanks for asking. Notice anything different today? You’re probably wondering why all of the sections of the post are in reverse order. Well, if it’s answers you seek, check the title. Order and Law, class, Order and Law. Given the title, I thought it would be fun to throw a little Missy Elliot into the mix and take today’s post, flip it and reverse it. Consider this our homage to the Seinfeld Backwards Episode. Remember that one? It is one of my all-time favorite Seinfeld episodes. My guy George Constanza was in rare form during that episode. “You can stuff your sorries in a sack, Mister.” I thought the conception of an episode that travels backwards through time was brilliant. I loved the way that things that don’t make any sense as you’re watching it are later explained by the preceding events that follow. Well done, Seinfeld writers’ room. Enough about Seinfeld, though. This is still a Friends blog series, after all. So without further delay, let’s get into today’s episode. And for that, class, by now you hopefully know what to do. LOOK UP ⬆️⬆️⬆️ – Friends S5:E19