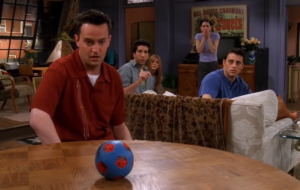 Friends S5:E21 – Yo, yo, ma Friends. How’s everyone doing on this, the first Monday in May? Hopefully no one in the class is fighting off any repercussions from an overly festive Cinco De Mayo yesterday. (Since everyone else is sharp and focused, that probably means I’m speaking to you, Johnny. Take off those shades in my classroom. Never mind, put them back on. You look absolutely wrecked. Haven’t you ever heard of the hair of the dog that bit me?) Me? How were my Cinco de Mayo festivities? Thanks for asking. Well, unlike Johnny back there, I celebrated a little bit but not enough to enter the hangover-zone. And even if I were hungover, I know it wouldn’t be fazing me right now because, if you remember, last time we convened, we started the official countdown clock to Summer Vacation 2019! And since an entire week has past now since starting that countdown, by my calculations, students, we have only 336 hours (or 14 days) ((or two weeks)) left until this clock’s time is up and summer vacation begins! Unlike Joey and Ross’s ball tossing game, we have an end to Friends 20/20: Season 5 and that sweet, sweet end is firmly in sight.

So let’s keep it moving and cut right into the meat of this episode. I love that Joey and Ross decided to make a game out of tossing a ball back forth for as long as they could without dropping. This was a phenomenal idea and I must say quite a solid way to chop it up with your buddies on a day when you’re just hanging out and shooting the shit. It seems like the type of thing my mid-twenties buddies and me would’ve done to kill time. In fact, I’m a little jealous that we never thought of it. Especially given the fact that I have a background in ball tossing games. Don’t believe me? Check the resume, son. During childhood trips to visit my aunt and uncle, my uncle would take my brother and me to his neighborhood pool and we would play a ball tossing game where you jumped up to toss the ball, then another player had to jump up to catch the ball and toss it to the next player, and so on. We would play this ball tossing game until someone dropped it and count the number of times we went without dropping. This went on for years. So yeah, I’ve got so much ball tossing game experience I should’ve had the foresight to bring those skills to my early-twenties “hanging with my bros” time and experience the type of epic joyous voyage that Joey and Ross embarked on in today’s episode. Of course just like any other good “hanging out with your friends” activity, ball tossing games come with the risk that that one friend that nobody wants to let play because they are so annoying they will ruin it inevitably somehow stops by. Because of course they do. In this case, we all know who that friend is. Sure enough, Monica just had to have happened to leave her glove over at Joey and Chandler’s and couldn’t have just got straight to work. And the nerve to make the suggestion that the team should be named after her in a game that she played absolutely no role in inventing? Although we all know that there’s no I in team, it’s abundantly clear that there’s an I in monIca.

One quick thought before we wrap up today. Is Gary really that stupid? In the handful of episodes that he had the opportunity to date Phoebe, did he really not make any effort at all to get to know her? Even if laying in bed and shooting birds through your window really is your thing, how do you not know to hide that little fetish from Phoebe Buffay aka the Biggest Lover of Innocent Animals in all of New York City? Thanks for playing, Gare Bear. After this, we’ve got only two episodes left in Season 5. Unfortunately for you, you will not be joining us for them. Gary the Cop: You are the biggest dumb ass. Glad I got that off of my chest. Aight, y’all. Let’s keep it moving. On to the recap. One. Two. Three. Team Adams.

Recap in the Key of Phoebe – This is the one where Joey and Ross decide to see how long they can toss a ball back and fourth without dropping it, Monica finds out from Gary (in confidence) that he’s going to ask Phoebe to move in with him and immediately tells Phoebe, Phoebe asks Chandler to talk to Gary and use his fear of commitment to talk Gary out of wanting to ask her to move in with him, Chandler tries to talk to Gary but ends up agreeing with him that he and Phoebe are ready to move in together, Rachel buys an evil hairless sphynx cat for $1000 dollars and then unloads it on Gunther for a profit of $500 after the evil cat starts scratching her up, and Monica and Chandler (aka The Dropper) join Joey and Ross’s ball tossing game only to have Monica (true to form) try to take it over and call the group Team Monica.
​
Gandalf Gaffes – None. Flawless episode!

Chan Man Quip of the Week – [The Setup] Upon Phoebe’s request, Chandler goes to Gary’s police precinct to try to use his fear of commitment to talk Gary out of asking Phoebe to move in with him. As Chandler is walking past a holding area towards Gary’s desk, he notices a couple of prostitutes sitting and waiting. [The Knockout] With a huge smirk that could light up the New York sky, Chandler leans over, greets them and asks, “Hey ladies! What are you in here for?”
​
#TheChickAndTheDuck