The King and Eye 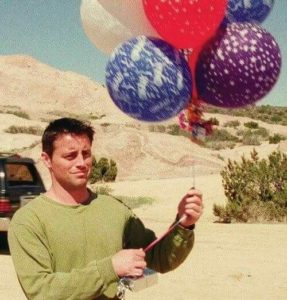 Friends S5:E22 – Howdy, Friendsters. Welcome, welcome, welcome, to the last stop before the halfway point of this wacky train ride we call Friends 20/20. That’s right, travel enthusiasts. The countdown clock to Summer Vacation 2019 has hit the one week mark and we have successful rounded first and are now sliding into second on the base path for this entire damn project! I can’t lie. Being as how this is the second-to-last blog post before my annual exodus to an undisclosed tropical beach paradise, I was more than tempted to further push the limits of my New Year’s Resolution 2019 by declaring today’s post a MAIL-IN SPECIAL. Unfortunately, though, playing that cards was off of the table when I walked into theLeftAhead offices this morning and was called into a meeting with my editor, Ted James. I must say, I was in a great mood commuting in this morning planning to punch in with a MAIL-IN SPECIAL and then immediately punch back out so it really caught me off guard to arrive and find out the boss wanted to do my annual performance review. I won’t bore you with the details of the meeting but let’s just say that the good news is by some stroke of luck, I’m still not fired. The bad news, on the other hand, was based on the nature of the conversation, it became abundantly clear to me that getting in and out today with a M.I.S. was completely out of the question. Never fear, loyal readers, because knowing Uncle Kenny as you do, you know that I’m not prone to obeying authority and I’m even less prone for taking direction from a superior so I cleverly figured out a way to as little work as I had been planning to do for the MAIL-IN SPECIAL but in way that ties into the content of today’s episode enough so that this post escapes the M.I.S. designation on a technicality. Clever, I know. So do you want me to tell you what I’m about to tie in order to not have to write another paragraph or two of direct episode-related content? Well, class, after my performance review, I tricked Mr. James into playing the game where you ask a question and then answer it really fast. And like any good journalist, I recorded the conversation on my phone. Here is the transcript:

What do you like better – recording music or writing for theLeftAhead?

What type of music would you rather listen to – classic hip hop or classic rock?

What would you rather do – write Black & Silver or read Friends 20/20?

What is Kawhi Leonard – a winner or a quitter?

What am I closer to having happen – getting promoted or getting fired?

Why did you hire me?

Because it was easier than writing 236 blog posts about Friends myself ?

That’s it for today, class. SEE YOU AT THE HALF-WAY POINT NEXT WEEK!!! Adams out.

Recap in the Key of Phoebe – This is the one where Rachel has to face her fear of things touching her eye when she needs to get treated for an infection, Joey gets the lead role in a movie that’s shooting outside of Las Vegas, Chandler accept’s Joey’s invitation to join him on a road trip to the movie set but then gets kicked off the trip when he tells Joey he doesn’t think this movie will be his big break, Phoebe is mad at Ross but can’t remember why, Ross figures out that Phoebe is mad at him for telling her she is boring in her dream which in turn makes Ross mad at Phoebe, Monica puts herself in charge of making sure Rachel goes to the eye doctor and subsequently takes her eye drops, and the gang is forced to pin Rachel like the king and eye drops are finally successfully applied to Rachel’s infection.
​
Gandalf Gaffes – None. Flawless episode!

Chan Man Quip of the Week – [The Setup] Phoebe and Monica are playing cards at Monica and Rachel’s apartment when the phone rings. Phoebe excitedly informs Monica, “Ooh that is definitely Chandler, Joey, or Ross. Or-or Rachel!” Monica picks up the phone and answers, “Hello?” After hearing the voice on the other end of the line, she looks over to Phoebe and tells her, “It’s Joey.” As Phoebe smiles (clearly pleased with herself), Monica tells Joey, “I’m so glad you called! Chandler told me what happened. Ya know he’s really upset about it.” From a pay phone somewhere out on his road trip, Joey says, “Not as upset as he’s gonna be when he finds out what I did with his sweater vests!” Curious, Monica asks, “What did you do to his sweater vests?” Joey answers, “Let’s just say there’s a well-dressed pack of dogs in Ohio.” He then continues, “Hey Monica listen is-is Phoebe there? I gotta ask her something about the car.” Monica replies, “Yeah, she’s here. Hold on a second.” She hands the phone to Phoebe who then greets Joey, “Hey dude!” Joey greets her back, “Hey Pheebs!” He then asks, “Listen, this wooden box keeps sliding out from under the seat. What-what is it?” Phoebe matter-of-factly answers, “Oh that’s my grandma. And thanks Joey she’s having a really great time.” Chandler then arrives at Monica and Rachel’s and notices Phoebe on the phone. He runs over emphatically asking, “Is that Joey? Is that Joey? Let me talk to him! I wanna talk to him!” Phoebe informs Joey, “Okay Joey? Chandler’s here, he was wondering…” Hearing a dial tone on the line, Phoebe looks up at Chandler and says, “Okay, I guess he ran out of change.” Frustrated, Chandler vents, “Ya know, he won’t even talk to me. How am I going to apologize to him if he won’t even talk to me?” Monica suggests, “Well, maybe you should send him something. So that when he gets to Las Vegas he’ll know that you’re sorry.” [The Knockout] Seeming to like the idea, Chandler puts his game face on and says as seriously as he possibly can, “That’s a good idea. I wonder where I could get a basket of porn?”
​
#TheChickAndTheDuck