Friends S5:E23 & Friends S5:E24 – This hand is your hand! This hand is my hand! Oh wait, that’s your hand! No wait, it’s my hand! Hey there, preFrienders. I’m so pleased that you’ve all chosen to gather here today to be a part of a post that’s five years in the making. (Well, four years, nine months, and four days, to be exact.) On September 22nd, 2014, we started this journey together on a whim. It was impossible, at the time, to grasp the full scope of the commitment we were signing up for. It just seemed like a fun dare, a neat way for our ragtag, jack-of-all-trades little blog to plant a flag in the pop culture arena. I’m mean, at the time we were thinking, how hard could it be to write a Friends blog post on the 20th anniversary of every episode, right? It will be a piece of cake. Of course, it only took a few weeks working on the project for us to realize how enormously foolish we had been. Our flippantness had landed us square at the beginning of the longest blog-writing marathon we could’ve possibly imagined for ourselves and our arrogance was ensuring that there was no escape. Had we been granted the wisdom of foresight, we would’ve let this Friends 20/20 idea pass through the ethos of theLeftAhead and evaporate back into the larger creative consciousness like dozens of other equally-worthy ideas for improving the site had before and since. But unfortunately, on that late-September Monday afternoon, there was no foresight to be granted. Instead, we hastily conceived the rules and parameters for this blog series, furiously cranked out the inaugural post, and blindly set out into the wilderness. Now, here we are, convening at such a historic landmark. I’ve got to say, it’s a little overwhelming. There were so many times we wanted to wave the white flag, abort the mission, and call in a rescue team to help pull us back out. Ever-present in the back of our minds, though, during those moments of doubt was that tricky, tricky arrogance reminding us that we would never abandon the mission; never let the legacy of this Friends 20/20 project be: incomplete. So we trudged ahead, week after week, year after year, season after season dependably delivering that witty, insightful commentary that loyal readers of theLeftAhead have come to expect. Also along the way during our arduous trek, we’d often fantasize about what it might feel like, look like, taste like, even smell like to get to where we are today. What’s that smell, you ask? Well, companion travelers, that smell is The Halfway Point. And I’ve gotta say, it smells good.

Could this moment be any sweeter? Actually it could and it is because added bonus: not only are we at the Halfway Point of our little blog series that could journey but today we just so happen to also be covering one of the funniest episodes of the entire series! You better believe it! Today is the Vegas Episode, baby! This episode has it all. There’s Chandler and Monica drama, Ross and Rachel drama, Phoebe in a fierce lurking duel with frail, old lady, and of course…Joey’s Identical Hand Twin!! So what do you say we second chorus this banger and transition immediately into the breakdown? We’ll begin today’s analysis with Monica and Chandler happily exchanging pleasantries on their flight to Vegas to start their romantic anniversary celebration when BAM…Phoebe. While, yes, technically Monica only has herself to blame for not telling Chandler about her lunch with Richard but come on Phoebe! Our quirky massage therapist sure does have a knack for divulging her friend’s secrets to her other friends, doesn’t she? You would think Monica would’ve been more upset with Phoebe for letting the cat out of the bag but maybe she wasn’t because this is just par for the course with Phoebe, at this point. Phoebe’s damage done, the ensuing insecurity about Richard that Chandler demonstrates fuels a tasty treat of comedy (not only in this episode, but for years to come) and the couples quarrel quickly threatens to ruin Mondler’s romantic getaway. After spending most of their first evening in Vegas apart, Monica and Chandler eventually make up on the Caesar’s Palace casino floor and then, in celebration of Monica rolling hot dice, decide to raise the stakes on their relationship. Hold that thought.

Meanwhile, Rachel and Ross (still in New York) have a hilarious encounter where Ross (looking over from his building across the street) spots Rachel being naked in her living room and determines that this must be her way of seducing him. He goes over and throw himself at Rachel only to be rejected and informed that Rachel’s nudity was not for his benefit. This sets into motion a series of dueling practical jokes designed to embarrass one another that ends with Rachel arriving in Las Vegas with writing on her face that won’t come off. Too embarrassed to be seen in public during her predicament, Rachel forces Ross to hang out with her in her hotel room which results in the two of them getting hammered. So hammered, in fact, that Rachel eventually agrees to leave the room under the condition that she gets to draw on Ross’s face as well. Both equally hammered and both sporting hilarious inked up faces, Ross and Rachel shake the foundations of the Friends universe when it’s revealed as the Season Five cliffhanger that, in a drunken-flurry, THEY GOT FREAKIN MARRIED!! Oh yeah, remember that thought we held in the previous paragraph? It turns out that Monica and Chandler were there to witness Ross and Rachel tying the knot because that stakes-raising decision that Monica and Chandler about their relationship was to FREAKING GET MARRIED THEMSELVES!! Turns out that not only is this The Halfway point in our project but the episodes leaves us dangling over a cliff, hanging by our fingers about not one but both of the most consequential relationships on the show. Quite a tasty treat of an episode, don’t you think? If all of that isn’t enough, though, there’s Phoebe trying to best that old lady at the time-honored tradition of lurking and the cherry on top of the entire dessert is Joey’s Identical Hand Twin!! I can’t think of a better place to pitch a tent for the summer than right under the ample shade of the Identical Hand Twin song. I’m just going to leave this right here (meaning, right below) to keep you cool, safe, and protected as we rest up these next few months for the second half of our impossible mission. Enjoy the break. We’ve certainly earned it. It’s so great to be here together at the Halfway Point. It’s been a long five years but we’ve made it because I’ve been there for you and you’ve been there for me too. Like Regina Follange leaving Conference Room B to converse with a couple of Identical Hand Twins before being noticed by a security guard that’s already banned Phoebe Buffay, I’m out! 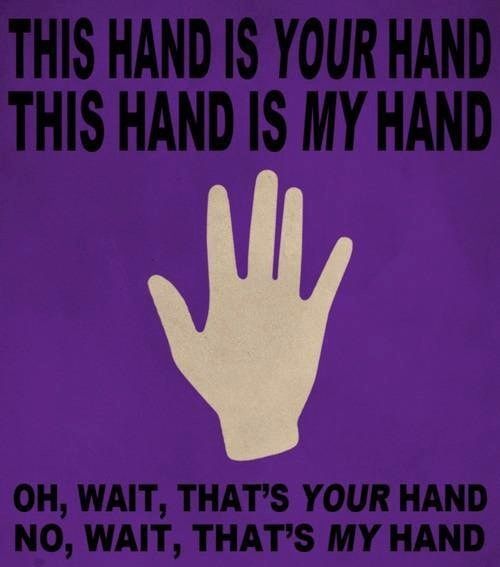 Recap in the Key of Phoebe – This is the one where Joey comes up with a money making scheme while working as a gladiator at Caesars Palace, Monica gives Chandler a trip to Las Vegas to visit Joey as an anniversary present, Phoebe decides she will also go on the trip to Las Vegas and then invites Ross and Rachel too, Chandler asks Monica to marry him, Ross and Rachel play pranks on each other, get really drunk, and then tie the knot in Vegas, and Joey gets thrown out of the casino for conspiring with Phoebe to harass a guy who he believes should embrace their shared future together as identical hand twins.
​
Gandalf Gaffes – None. Flawless episode!

Chan Man Quip of the Week – [The Setup] Monica and Phoebe are at Rachel’s apartment when Chandler enters and says, “Hey.” Monica walks up to greet him beaming and declares, “It’s almost our anniversary!” Joining in her enthusiasm, Chandler responds, “I know. Can you believe it? One year ago today I was just your annoying friend Chandler.” Unable to resist interjecting herself into the couples little moment, Phoebe announces, “Awww! Now you’re just my annoying friend Chandler.” Unprepared for Phoebe’s quick wit, Chandler reacts with a caught off guard, “Huh?” Refocusing her boyfriend on their special moment, Monica tells Chandler, ” I got you a present!” Not wanting to spoil the occasion, he protests, “Oh, but it’s not ’til tomorrow!” Handing him a box, Monica insists, ” I know, but you have to open it today.” Chandler accepts with an “okay” and then starts meticulously attempting to unwrap the gift. Monica grows increasingly impatient until she can’t control it anymore. She grabs the box back, rips it open and says, “Okay! There you go! It’s two tickets to Vegas!” Surprised and excited, Chandler exclaims, “Wow!” Equally excited, Monica explains, “For this weekend! Oh gosh, it would be perfect, we get to see Joey plus we get to start our anniversary celebration on the plane. We can call it out plane-aversary.” Absorbing the lameness of Monica’s cheesy suggestion for naming their trip, Chandler protests, “Do we have to?” The wind taken out of her sails, Monica sheepishly relents, “No.” Returning to the trip itself, Chandler probes, “Okay this is great, but Joey said he didn’t want any of us out there.” Confident about her reading of Joey’s intentions, Monica continues selling Chandler, explaining, “Oh, he just doesn’t want us to go through any trouble. Think of how excited he’ll be when we go out and surprise him! Plus we get to have our own, ani-Vegas-ary! A-Nevadaversary!” [The Knockout] Annoyed that Monica’s insistence on naming the trip has now reached pique-cheesiness, Chandler the Great aka Lord Quippington of The Village deadpans, “Yeah, I think we should see other people.”
​
#TheChickAndTheDuck