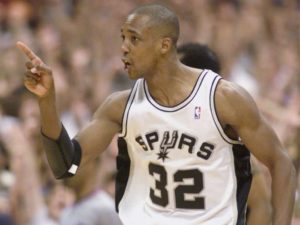 Lose Yourself – Damon Stoudamire, Arvydas Sabonis, Rasheed Wallace, Brian Grant, Isaiah Rider, Stacey Augmon, Jim Jackson, Walt Williams, Jermaine O’Neal, and Greg Anthony came to play that day. As we knew they would. After all, every higher-seeded playoff team understands that stealing one of the first two games on the road as the underdog increases your chances of winning the series astronomically. Having lost 80-76 in the grind fest that was Game 1, the two-seeded Portland Trail Blazers, a healthy mix of talented budding superstars and savvy established veterans, were a confident (bordering on cocky) bunch that had every intention of advancing to the NBA Finals and, as a stepping stone towards that end, had every intention of winning Game 2 of the 1999 Western Conference Finals at the Alamodome in San Antonio against the one-seeded Spurs. Led by Mike Dunleavy, an experienced coach who already had one NBA Finals appearance under his belt (1991 – as coach of the last Magic Johnson-led Los Angeles Lakers team to reach basketball’s ultimate stage), the Blazers came into the game that Memorial Day afternoon poised and prepared to do what it would take to seize a home-court-advantage-stealing victory.

After one quarter, Portland was well on its way. The Blazers came out focused, shot well, and bullied their way to an early 31-20 eleven point lead after one. The second quarter slowed down to a sluggish stalemate as each team tried to impose their defensive will. When the dust settled on the first half, Portland had increased their lead by 14, out-grinding the Spurs 17-14 in the second period and taking a 48-34 advantage with them into the locker room. Part of the Blazer’s recipe for holding San Antonio to a 34 point first half was keeping the Spur’s young superstar Tim Duncan in relative check. Timmy seemed to get lost in the shuffle of the first half, missing a few free throws and battling the Blazers big men with less than his normal aggressiveness down low. Overall, the Spurs just seemed to be a step slow like we were stuck in cement. Boasting a seven-game playoff winning streak, I remember it being tempting down 14 at the half to just assume we were overdue for bad game and assume this just wasn’t meant to be our afternoon. Certainly, the Blazers were counting on as much.

After halftime, the third quarter started with more of the same as the Blazers extended their lead to 18 points. Things started looking up when Sean Elliott made a three pointer that ignited a run for the Spurs to get back in the game. Things finally just started clicking. Mario Ellie provided much needed energy to give the Spurs some life, David Robinson anchored the defense to give us some transition opportunities, Timmy started looking like Timmy, and Sean Elliott was hitting crucial three point baskets. By the end of the third, the home team had cut the halftime deficit in half, winning the quarter 26-19 and only trailing Portland 67-60 heading into the final frame. The Spurs continued their comeback push into the fourth quarter but each time we were able to cut the lead down to a two possession lead or less, Portland seemed to have an answer to continue to hold us at bay. Despite the improved second half play, things were still looking pretty grim with 1:05 left to play. We were still down six, 84-78. Luckily, we had possession of the ball coming out of a timeout and having demonstrated an ability to score in spurts during the second half, we still had a glimmer of hope. The ball was inbounded to Avery Johnson and our floor general ran a pick and role with The Admiral and, coming off the screen, fired the ball out to Sean Elliot on the left wing. Without hesitation, Sean rose up and buried his fifth three pointer of the game to cut the lead in half. With Portland now feeling a newfound sense of pressure nursing a one-possession lead, Jimmy Jackson caught the inbound pass, came back down, ran some clock, and got the ball to Rasheed Wallace on the left elbow. Wallace looked down into the low block where Jackson had established post position. He picked up his dribble to drop the ball in the post with Robinson draped all over him. As he tried to pass the ball, Big Dave got a finger on the pass and intercepted it. He quickly spotted Mario Ellie sprinting down the court and fired the outlet to him. Ellie caught the ball and drove hard into the paint, drawing a foul on the layup attempt. Mario, a two-time champion (Houston Rockets, 1994 & 95) playoff veteran calmly sank both foul shots cutting the lead to one, 84-83. Their statement road victory, now in catastrophic jeopardy, Portland called a timeout to regroup. Coming out of the timeout, the Blazers inbounded the ball to Wallace who immediately got it to Damon Stoudamire setting up a pick and role. Stoudamire came off of the Wallace screen and shot an elbow jump shot that clanked off of the rim. Unfortunately, the Spurs were unable to secure the rebound as Walt Williams rose up and snagged it. He got the ball back out to Wallace who fired it over to Jimmy Jackson and, now under 24 seconds left in the game, San Antonio was forced to foul. Sean fouled Jackson with 12.4 seconds left but, unfortunately, we weren’t in the penalty yet. The Blazers took the ball out on the side and got it in to Stoudamire who was fouled immediately by Avery with 12.0 seconds remaining. With Might Mouse now facing two high-pressure shots one thing was clear. Barring an offensive rebound on the second attempt, the Spurs were going to have a chance to either tie or win the game on their next possession.

Damon Stoudamire walked up the line to take what would prove to be the biggest free throw shots of his career and, after methodically dribbling the ball four times, misfired on the first attempt. A slight hint of dejection on his face, he went back into his routine and then made the second attempt to increase Portland’s lead to two, 85-83. After the second shot went through the net, Spurs coach Gregg Popovich called timeout to draw up a play a play. San Antonio came out of the timeout with 12 seconds left in the game and lined up a play that had Mario Ellie inbounding the ball. After seeing how the Spurs were set up, Portland used a delay of game warning to make the Spurs reset the inbound play. Using Steve Kerr as a decoy on the strong side, the Spurs ran Sean Elliott off of a David Robinson screen. Sean gained a hint of daylight on his defender Stacey Augmon coming off of Big Dave’s screen and so Mario Ellie fired the ball to him in the corner. Augmon gambled by going for the steal and when he missed it, he was effectively out of the play. Rasheed Wallace alertly started coming over to help as Sean caught the ball on his tippy toes in the corner. He was so close to the sidelines that had he put his heels down on the ground, he would’ve been out of bounds. Maybe he was aware of his proximity to the sideline or maybe it was simply fate but instead of bringing his heels down, he turned and fired a three off of his tippy toes and over the closing outstretched long arms of Rasheed Wallace and buried the Memorial Day Miracle with nine seconds left to give the Spurs an improbable 86-85 lead.

Forty seven minutes and fifty one seconds. Once again, after trailing for the first forty seven minutes and fifty one seconds of the game, Sean Elliott’s miracle, tippy-toe, rainbow three over the outstretched fingertips of Rasheed Wallace gave the San Antonio Spurs their first lead of the game. Our first lead of the game would also prove to be the final score as Portland was unable to get a clean look in the final seconds coming out of a timeout. After the Spurs returned the favor using their delay of game, Portland inbounded to Jimmy Jackson who drove and attempted a shot that was blocked. The blocked shot popped back out to Walt Williams who fired a desperation attempt that unsuccessfully bounced off the backboard and the rim. After a scramble for the rebound, Avery Johnson came out of a scrum with the basketball and the miracle comeback was complete. Spurs won the game in unbelievable heroic fashion, 86-85.

I remember watching Sean’s shot go in and believing for the first time, after years of agonizing playoff heartbreak, that my Spurs could and would win a championship. In many ways, the Memorial Day Miracle was the spark that ignited a basketball revolution in South Texas that continues to burn true to this very day. The five NBA championships, six conference championships, perennial playoff appearances, the universal recognition as the NBA’s model franchise, all of it can be traced back to Sean’s shot. To this day, it is still probably the most memorable moment in franchise history and one that Spurs fans have come to cherish. Considering that Sean Elliot has spent the better part of the last twenty years as the Spurs’ color television analyst, it’s probably also the most shown highlight in team history. Season after season, Sean is always more than happy to talk about the shot during Spurs broadcast anytime the Fox Sports Southwest team feels compelled to show the replay.

The player of the game was, of course, Sean Elliott. After draining the biggest shot in franchise history, the most beloved Spurs small forward of all-time finished 6-7 from downtown (8-10 overall) to come up with his 22 huge points. He also chipped in two rebounds, two assists, and a steal towards the mesmerizing comeback victory. After a quiet start in the first half, Tim Duncan finished the game with impressive numbers, as well. Timmy finished with 23 points (8-11 shooting), 10 rebounds, five blocks, and two assists. Last but not least was David Robinson’s impressive stat line. The Admiral finished with 14 points (6-10 shooting), seven rebounds, two assists, and three huge steals (the last of which gave the Spurs the two Mario Ellie free throws that put them in position to win the game). As you might’ve guessed, the Trailblazers were unable to recover from the devastating loss dropping both home games in Portland. The sweep in the 1999 Western Conference Finals sent the San Antonio Spurs to their first-ever NBA Finals to face the New York Knicks. It’s incredible to think about the fact that it’s been 20 years since the Memorial Day Miracle. Since theLeftAhead wasn’t established until 2011 and the Black & Silver blog series didn’t exist for the first four Spurs championships, in keeping with the practice of featuring a blog post about each episode of Friends on the 20th anniversary of it’s airing with Friends 20/20, I’m really excited to relive some of the most important moments in the first four Spurs title runs on the 20th anniversary of important playoff games through this new mini-series, B&S 20/20. What better place to start than the Memorial Day Miracle. See you next month for the 1999 NBA Finals.