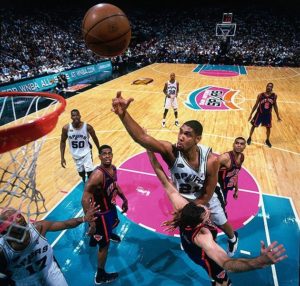 Get Ready for This – Throughout my childhood growing up in Central Texas, I had regularly dreamed about this moment. As far as moments go for a city and its fans, this one was huge and luckily, the city of San Antonio had a building huge enough in its own right to handle it. 39,514 success-starved, exuberant Spurs fans packed themselves into the Alamodome on June 16th, 1999 to be a part of history. Unfortunately, as many times as I had imagined participating in this historic event throughout my childhood, I was not one of them. While I had just completed my sophomore year in college at Trinity University in San Antonio, after the Spring semester I accepted a summer job back in Austin and I was working a demanding schedule that did not afford me the time off to make it back to San Antonio to take part in my beloved Spurs historic moment. If my memory serves me correctly, I watched history unfold in a pool hall with some work friends in Austin. Even though I wasn’t there in person, it was still surreal seeing my Spurs, perennial regular season overachievers and playoff underachievers, host the first game in the NBA’s showcase event of the post-Chicago Bulls dynasty. (More on that later.) When Spurs legend George Gervin strolled to center court to toss up the ceremonial jump ball that commemorated the Spurs being the first former ABA club to reach such a milestone, it started setting in for me that my childhood dream was becoming a reality. The San Antonio Spurs were finally about to play in the NBA Finals.

Going into the series, we were heavily favored over our opponents, the New York Knicks. Because of the lockout-shortened season, the Knicks came into the playoffs with a more talented roster than their seed (eighth) reflected. They were able to use that talent to become the first 8-seed in league history to advance to the NBA Finals, dispatching the higher-seeded Miami Heat, Atlanta Hawks, and Indiana Pacers to grab the Eastern Conference crown. Nonetheless, with franchise cornerstone Patrick Ewing sidelined due to injury for the series, the Knicks entered the series as one of the biggest underdogs in Finals history. It didn’t help the Knicks title hopes that not only were they facing the 1-seed from the West but the Spurs were marching into the Finals boasting a 10-game playoff winning streak (our last loss against the Timberwolves in Game 2 of the first round). Despite the long odds, New York came out sharp in the first quarter taking an early 27-21 lead after one. The Knicks were led to the early lead by Allan Houston draining midrange jumpers and Latrell Spreewell making aggressive moves into the paint. Not to be overshadowed, Tim Duncan hit the first shot of the series, a signature bank shot from the elbow and established himself early as the best player in the series. By the second quarter, San Antonio had settled into form taking an eight-point lead (45-37) into the locker room. The second half was more of the same of what the Spurs showed in the second quarter, playing the Knicks even in the third and then outscoring them 18-14 in a defensive masterpiece of a fourth quarter. The outcome of the contest was never really in doubt in the second half. When the dust settled, the Spurs were leading their first-ever NBA Finals one game to none with a commanding 89-77 victory. Another thing was clear one game into the series. A player had emerged to grab the best basketball player in the world title that had been vacated by Michael Jordan at the beginning of the calendar year. And that player’s debut on the NBA Finals stage demonstrated a similar dominance to His Airness’ debut.

On June 2nd, 1991, after years of Eastern Conference playoff disappointment, Michael Jordan finally had his first opportunity to showcase his talents in the NBA’s premier showcase, the NBA Finals. His Airness did not disappoint that night putting up a jaw-dropping 36 points (14-24 shooting), 12 assists, eight rebounds, and three steals in a hard-fought two point defeat for his Chicago Bulls against Magic Johnson and the Los Angeles Lakers (93-91). Jordan’s Bulls would go on to win the next four straight and his first championship, followed by five more chips over the next seven seasons. Fast forward to the end of the decade and the title of best basketball player alive was up for grabs following Jordan’s retirement on January 13th, 1999. In a similar demonstration of dominance on basketball’s biggest stage to the player from whom he was snatching the mantle, Tim Duncan produced an epic NBA Finals debut. En route to earning player of the game honors, Timmy had 33 points (13-21 shooting), 13 rebounds, two assists, two steals, and two blocks. It seems weird in retrospect given that Michael Jordan’s NBA career began in 1984 and Tim Duncan’s ended in 2016 that these two “Finals debut” performances were a mere eight years apart.

Another key performer in the Game 1 victory was David Robinson. After 10 years of playoff disappointment as the Spurs “number one” option, the Admiral graciously accepted a new role in the lockout shortened 1999 season as the team’s second option and defensive anchor. It paid off in a big way because not only was this game Tim Duncan’s NBA Finals debut, but it was also Big Dave’s NBA Finals debut as well. While not the legendary Finals debut of his younger teammates, Robinson had a fantastic all-around game with 13 points, nine rebounds, seven assists, three steals, and three blocks. By the way, the Twin Towers combined five blocks in Game 1 does not do justice to how dominant the tandem was on the defensive end. They were dominant on that end of the court, disrupting numerous other shots while leading the way in limiting the Knicks to 31-81 from the field (.383) and only 77 total points.

Finally, journeyman Jaren Jackson gets an honorable mention for his 17 point (6-13 shooting), two rebound, two assist, one steal performance. Jaren proved to be an important offensive spark plug off of the bench, hitting timely jumpers including an improbable, off-balance triple in the corner. After the game, I remember leaving the pool hall in Austin beaming with confidence and bouncing off of the walls with anticipation. My long suffering, underdog, small market San Antonio Spurs were just three wins away from an NBA Championship. I remember being all smiles as I drove home to get some sleep that night after the game. I couldn’t wait to see what would happen 48 hours later in Game 2. Friday night couldn’t get here fast enough.