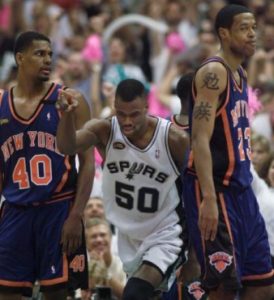 Learn to Fly – Sixth months prior to the turn of the century (and the millennium depending on your counting), the future looked pretty bright for the New York Knickerbockers and their fans. Their longtime finals-preventing-nemesis Michael Jordan was retired and the stranglehold on the Eastern Conference he and his Chicago Bulls had maintained during all of the non-baseball-interrupted nineties was no more. With an adoring fan-base, vast resources, and playing in the biggest market in the East, the Knicks were well positioned to dominate the conference in the coming decade. More importantly, New York had been gifted a rare opportunity to own the present. Stealthily weaving together their second Finals run of the nineties by overcoming the enormous odds of winning the East as the eighth-seed (and even more astronomical odds given they lost their franchise cornerstone Patrick Ewing to injury for the season during the process), even down 0-1 to our Western Conference Champion San Antonio Spurs heading into Game 2, the Knicks were, by any measure, playing with house money with the unlikely opportunity in front of them. Sure, the walls they needed to scale were daunting. Conquering the most imposing set of Twin Towers in NBA history would be no easy feat. The Spurs were a juggernaut but admittedly, we were an unproven one and NBA history suggested that opportunities to be the first team to climb the mountain the year after a dynasty falls don’t come along very often. On June 18th, 1999, only two teams still had that opportunity and the Knicks were one of them. Regardless of the talent deficit, the New York and San Antonio franchises were on equal footing as far as trying to establish a championship-winning meddle and for that reason, the Knicks walked back into the Alamodome for Game 2 with a puncher’s chance to steal the final chapter of the NBA’s storied century.

In order to make good on their unlikely opportunity to close the century as champions, the Knicks needed to punch their ticket back to New York with a Game 2 victory and a 1-1 series. The history of the 2-3-2 NBA Finals format demanded as much. At the time, no team that had started the Finals on the road had ever swept their three home games in the middle of 2-3-2 format. That being the case, the Knicks could only reasonably expect to win two of their three home games in New York so, already down 0-1, Game 2 was a defacto must-win for the underdogs. Should the Spurs win Game 2, the Knicks could almost certainly expect to at best return to San Antonio down 3-2 and needing to win both final road games to win the series. Considering how much of an uphill challenge that would be, there was no getting around the fact that New York desperately needed a Game 2 victory and the split to realistically keep their title hopes alive.

Once the game tipped off, despite playing with the necessary desperation, New York found themselves playing from behind all night in a defensive slugfest. The Spurs jumped out to an early 20-15 lead after one quarter but the Knicks needed a late spurt just to stay within striking distance. The Spurs building a lead and then the Knicks going on a run to close the gap proved to be the theme of the night. New York held San Antonio to even in the second quarter (19-19) and went into the halftime break still only down five. The Spurs outpaced the Knicks by two points in the third (17-15) to increase our lead to seven heading into the final frame. In the fourth quarter, San Antonio put New York away with a dominating 24-18 fourth quarter performance that put the Knicks exactly where they knew that couldn’t afford to be…down 0-2 in the NBA Finals heading home.

The final score was an eye-popping 80-67. (That’s right, the New York Knicks scored a putrid 67 points in an NBA Finals game.) The player of the game was once again Tim Duncan. Timmy had a monster 25 points (9-19 shooting), 15 rebounds, four blocks, and three assists. David Robinson stepped up big once again with 16 points (5-8 shooting), 11 rebounds, five blocks, and four assists. That’s correct, you read that right. The Twin Towers combined for nine blocked shots to build upon one of the most dominating interior defensive Finals performances in NBA history. While Latrell Spreewell (26 points) and Allan Houston (19 points) led the charge in keeping the Knicks within striking distance for most of the game, neither shot the ball efficiently (.364 & .450, respectively) and could never find enough holes in the Spurs interior defense to keep pace with San Antonio’s offense. Finally, I want to make a special note to recognize Spurs point guard Avery Johnson. By the numbers, Johnson’s performance was quite pedestrian (eight points and five assists) but the numbers simply don’t do justice to Avery’s masterful floor game. All night he made sure Duncan and Robison got the ball in their preferred spots and controlled the pace of the game in such a way that eventually allowed the Spurs defense to grind the Knicks to dust. Taking a dominant 2-0 lead in the series and extending our playoff winning-streak to a then record 12 straight games, it was starting to look and feel like the San Antonio Spurs being crowned 1999 NBA Champions was simply a matter of time.