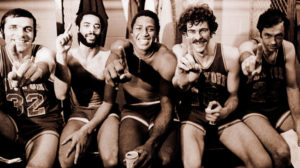 Welcome to New York City – Welcome to the Empire State. Home of the World Trade. Birthplace of Michael Jordan. Home of Biggie Smalls.. How fitting a setting. The San Antonio Spurs first NBA Finals road game in franchise history was scheduled to be played in the Mecca, Madison Square Garden, the most famous and arguably most historic basketball arena on the planet. The New York Knicks, our opponents faced a do-or-die must-win scenario in Game 3 on their home floor having dropped both games to the Spurs in San Antonio and trailing the Finals 0-2. On June 21st 1999, Knicks fans packed the storied arena in hopes of rekindling the magic of the summer when the city cheered on Walt Frasier, Willis Reed, Bill Bradley, Dave DuBusschere, and Phil Jackson to the 1973 NBA Championship. You know, the summer When the Garden Was Eden Channeling some of their storied ghosts, New York did the first day of summer justice by coming out blazing hot to take an early 20-10 lead. On this Monday evening that doubled as the Summer Solstice, the Knicks would’ve been primed to boat race San Antonio out of historic Madison Square Garden in the first period (right along side Spring) if it hadn’t been for Spurs reserve guard Antonio Daniels hitting two improbable first quarter threes to keep us within striking distance. All told, New York, led by Allan Houston with 13 first quarter points, enjoyed an 11 point 32-21 advantage after the first quarter.

Having absorbed a powerful blow in the first, the Spurs punched back in the second. Following the lead of all-world power forward, Tim Duncan and former league MVP David Robinson, the Spurs outscored the Knicks 25-17 in the second quarter to cut the halftime deficit to 3 (49-46) and put ourselves within striking distance to take an insurmountable 3-0 series lead with a solid second half. Adding to the Knick’s concern that the season might be slipping away was the fact that backup point guard Chris Childs got hurt and his second-half return was questionable. Avery Johnson had a good overall first half playing his role as floor general efficiently. Johnson would finish the night with 10 points, 4 assists, 4 rebounds, and a steal but the boxscore fails to do justice in conveying the impact that Avery had controlling the tempo and setting up his bigs to earn a lot of the credit for preventing the Spurs from succumbing to the energy of the Knicks and their crowd and getting blown out in the first half.

Relying on the stingy defense that had become our trademark throughout the playoff run, San Antonio started the third quarter 12-9 to tie the game up at 58. In one particular stretch, the Spurs defense forced New York into 12 consecutive missed field goals. True to form, Duncan and Robinson aka the Twin Towers led the defensive effort with pestering the Knicks into rushed shots and then gobbling up every rebound in sight. New York was able to eventually make up the three-point margin they had conceded earlier in the period and played San Antonio to even (16-16) by the end of the defensive-brawl of a third quarter. In so doing, New York was able to maintain its slight three point advantage heading into the fourth.

The tone for the final frame was set when Marcus Camby had a vicious follow up slam early in the period. The Madison Square Garden faithful were also given a boost by Chris Childs return to play in the final seconds of the third and seeing him retake the court to start the fourth. With momentum on their side, the Knicks extended the lead and kept us at bay as time on the clock (and for the Spurs to make a run) methodically ticked away. With 3:11 left to play, Sean Elliot hit a three that cut New York’s lead to four (81-77) and that would prove to be as close as we would get to closing the margin late in the fourth. The Knicks held us off down the stretch by making most of their crunch time free throws. Ultimately, the New York Knicks snagged their first NBA Finals victory in five years, winning 89-81 to cut the Spurs’ series lead to 2-1. The most telling stat in explaining why the Spurs lost? Tim Duncan did not score in the fourth quarter. Even with a goose egg in crunch time, Timmy finished the game with a solid 20 points (8-16 from the field), 12 rebounds, three steals, two assists, and a block. The players of the game, however, was his Twin Tower running mate. David Robinson finished the night with 25 points, 10 rebounds, two blocks, and an assist. There was no question The Admiral could tasted his first title and wanted this game badly to put a strangle-hold on the series. In the end, New York’s own dynamic duo proved to be too much. Allan Houston finished with a gigantic 34 points and Latrell Spreewell tacked on another 24 points and five assists. Incredibly, this was the Spurs first playoff defeat since May 11th (an 80-71 home loss to the Minnesota Timberwolves in the first round) and the defeat snapped the Spurs’ 12 game playoff winning streak. Setting playoff winning streak records was the furthest thing from the team’s minds leaving the Garden that night. The 1999 NBA Finals was now a 2-1 series and that meant it was up for grabs. The Western Conference Champions had no choice but to regroup and start a new playoff winning streak. Our first opportunity would come two days later back in the Garden and for the next 48 hours, starting a new winning streak would be the only thing on our minds.