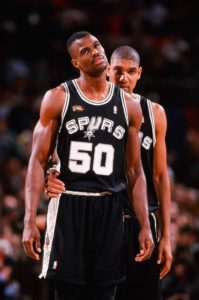 House of the Rising Sun – It must’ve been a funny feeling for the players on our Western Conference Champion San Antonio Spurs to walk off of the Madison Square Garden basketball court in New York City on the short end of the score board after Game 3 of the 1999 NBA Finals. After all, the 89-81 loss to the New York Knicks was the first defeat in our past thirteen playoff contests. So, in other words, winning was such a regular occurrence during our 1999 NBA playoff run, it must’ve been a strange sensation when the (at that time) NBA record-tying 12-game playoff winning streak came to an end. Having had so much recent success, a loss was not only overdue, it was probably also a bit of a refreshing funny, strange sensation. The loss provided a rare opportunity for the team to regroup, refocus and use some much-needed adversity to come back together as one with a unified focus for completing the mission. While on the one hand, one loss after 12 straight victories might not seem like a very big deal, on the other hand, this particular loss gave the Knicks life in their own pursuit of winning a championship. At 2-1 now, the loss brought New York within one game of tying the series with the next two games still being played in their building. Regardless of the 12-game winning steak, the Spurs were in a dog fight still to win our first championship and any kind of lapse in focus could result in us returning to San Antonio down 3-2 and on the brink of elimination. The Game 3 loss, both a curse and a gift, had given New York new life but may also have been the wake up call the Spurs needed in order to summon the focus to finish the job.

Back in MSG a mere 48-hours after the defeat, the focus was evident on the faces of the Spurs’ starters as they took the court after opening introductions. After the tip, David Robinson set the tone with some early aggressive blocks. The Admiral’s efforts on the defense combined with an overwhelming combined effort with Tim Duncan on the boards allowed the Spurs to get out to an early 15-8 start. It was also evident from early on that the Knicks also came to play. Sparked by an uncharacteristic 10 first quarter points by point guard Charlie Ward, New York responded to the Spurs early push and pushed back to take a 29-27 lead after one.

Heading into the second, the Knick’s run swelled to 10-2 before Avery Johnson hit a pair of runners to tie the game back up with nine minutes left in the second quarter. Then, after getting a stop, veteran journeyman Jerome Kersey hit a corner jumper to give the Spurs the lead back 33-31. The teams traded baskets for a few possessions until Sean Elliott got a kind bounce on a three point attempt to put the Spurs back up by three at 38-35. Tim played well down the stretch of the second quarter and his 14 first half points helped to keep the Knicks at bay in order to take a 50-46 lead into the locker room at halftime.

I don’t know what Gregg Popovich said to the team at halftime, but whatever it was, it ramped the focus up to an unprecedented level as the teams retook the court for the third quarter. How do I know the Spurs’ focus was at an unprecedented level? We started the quarter in utterly dominating fashion, hammering the Knicks with a 9-0 run to start the second half. Latrell Spreewell’s 10 points in the third quarter kept the Knicks within striking distance but continuing his strong play as the Spurs’ floor general, Avery Johnson was up to 14 points of his own for the game after three quarters. Since Duncan and Robinson were continuing to dominate the paint, San Antonio was able to add five extra points to their margin having increased the lead to 72-63 after three.

David Robinson came up huge early in the fourth when his running mate, Tim Duncan, struggled with back to back turnovers early in the frame. The Admiral made some timely buckets and free throws and continued dominating the paint with blocked shots and rebounds. Despite Robinson’s brilliance, the gritty Knicks continued to hang around. Game 4 was becoming another “who wants it more” competition of wills and it was reassuring that Big Dave’s relentlessness was outshining anything the other side could muster. In one critical play with the Spurs up six points midway through the final frame, Robinson forced Larry Johnson into a tough, air ball fade away. Tim Duncan snatched the rebound and fired an bullet of an outlet to a streaking Mario Ellie for a break away dunk. It was Robinson’s effort that made the play possible and was appearing to be winning out in the contest of wills. Latrell Spreewell and Allan Houston, however, had a “not so fast” response. Spreewell made an incredible “force of will” tip in over Duncan and Robinson and then Houston added a patented turn around jumper on the next possession. Throw in a Charlie Ward free throw and the Knicks had cut the lead to 81-80 with five and a half minutes to play.

The Twin Towers absorbed the body blow and responded with back to back buckets of their own (Robinson first, then Duncan). Mario Ellie tacked on a free throw and the Spurs’ lead was back up to six. The back and forth continued as Marcus Camby made a three point play and Larry Johnson followed with a free throw to cut the lead back to two at 86-84. The momentum would swing back to the Spurs yet again but this time, we wouldn’t relinquish it. The suffocating San Antonio defense (anchored by the Twin Towers) dominated down the stretch as the Spurs held the Knicks scoreless for several straight possessions. On the other end of the court, Elliott, Robinson, Johnson and Duncan all participated in a parade to the free throw line. When the dust settled, the Spurs had made 8-10 (4 from Elliott, 2 from Duncan, 2 from Robinson, 0-2 from Avery) and extended the lead to 94-84 with under a minute to play. Marcus Camby provided a “too little too late” 4-0 run with a quick couple of buckets to bring New York back within six at 94-88 with 17 seconds left. Mario Ellie officially sealed the victory with two free throws before Camby made the game’s final point on a free throw of his own when the game was out of reach. All told, the San Antonio Spurs defeated the New York Knicks 96-89 to take a 3-1 lead and inch within one victory of our first-ever NBA Championship.

The player of the game deserved to be split between two players. Here is their combined stat line: 42 points, 35 rebounds, 7 blocks. Can you guess which members of the Twin Towers I’m referencing? Exactly – David Robinson and Tim Duncan were incredible. 35 rebounds, in particular, by two players is astonishingly dominant. Since the rules of our blog series are such that I have to choose a singular player of the game, let me first single out Big Dave for individual recognition. Robinson had 14 points, 17 rebounds, and four blocks. In case you don’t feel like doing the quick math, that means that Tim Duncan had 28 points, 18 rebounds, 3 blocks and oh, by the way…also three assists in Game 4 of the NBA Finals as a freaking sophomore NBA player. Yeah, I think even D-Rob would agree, Tim Duncan is the player of the game. The first player since Magic Johnson to perform at basketball’s biggest stage at such a high level at such a young age, the recent Wake Forrest graduate had led the San Antonio Spurs to within one victory of their first-ever NBA Championship. Along with the 3-1 series lead came an opportunity to close out inside basketball’s most storied arena – Madison Square Garden two nights later. 48 hours to glory? Or 48 hours to just another Friday night in Manhattan? Stay tuned and…