Last Time I Checked This Was Still America 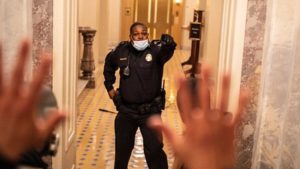 Friends S7:E12 – The last time I checked this was still America. What happened on Wednesday isn’t supposed to happen in this country. It is almost impossible to describe the emotions that were stirred up in me from the combination of the lack of surprise that this was the inevitable culmination of where Donald Trump had been leading the Republican Party for five years mixed with the utter disgust of seeing the visuals (particularly the Confederate flag being waved in the Capitol of the United State of America) but I’ll try: burning anger, profound sadness, utter disgust. Here we are five days later and the shock of something that was so predictable is still surreal, the pain is still acute. Last time I checked this was America and insurrection is not something we are supposed to experience. I’m mean, Friends 20/20 is a blog series about a 90s/2000s sitcom, it’s supposed to be fun, goofy, light-hearted, trivial but nevertheless since this blog series is also supposed to be topical, here I am writing about the same type of hate and horror that my father fought against in World War II except this time, that hate and hour is festering inside of our own country. I thought that the election of Joe Biden would allow me to steer this blog series back away from being a political vehicle to resist the absolute carnage that the Trump presidency has wielded on our democratic norms but, sadly, I guess charting that happier, more scenic course is still going to have to wait a bit longer. This is unbelievable.

It would be easy to discount the perpetrators of Wednesday’s insurrection as a fringe, extremist element that does not reflect the values of most of Donald Trump’s voters. The last thing I want to say on this before we chalk this week’s post up as an L and attempt to regroup during the break (we are off for the rest of the month until February 1st and I must say, given that Wednesday might have been the most traumatic day in America since September 11th, 2001…I’m going to greatly appreciate the time off to process this and reflect) is that the word that rang inside my head the most on Wednesday is complicity. WE HAVE KNOWN WHO donald trump IS ALL ALONG AND THERE IS NOT BEEN ONE ACCEPTABLE RATIONALIZATION FOR SUPPORTING HIM SINCE THE DAY HE ANNOUNCED HIS BID FOR THE WHITE HOUSE IN 2015. Sure, the insurrectionists are absolutely individually responsible for their actions on Wednesday but Senator Josh Hawley is complicit in the insurrection. Senator Ted Cruz is complicit in the insurrection. Senator Mitch McConnell, Senator Lindsay Graham, Representative Kevin McCarthy, every Republican elected official (including Liz Chaney and those that had the decency to at least turn on Trump in the eleventh hour) are all complicit. Guess what? IF YOU VOTED FOR donald trump IN 2020 YOU ARE COMPLICITY TOO. Even if you’re a regular reader of theLeftAhead, sorry…if you voted for Trump in 2020, you’re complicit. Own it. Sure, this is a time for healing and bringing the country together under Joe Biden’s leadership but not without accountability. Accountability is paramount to ensuring that we don’t see a repeat of this ever again in our beautiful country’s future. 74,223,744 Americans are complicit in insurrection against our democracy and have some serious reflecting to do in order to walk themselves back to rejoining the rest of us in sharing the American value of decency again. I hope you all start getting to work. Lastly, big ups to Eugene Goodman, the Capitol Police officer who steered insurrectionists away from the Senate chamber where Vice President Pence and Senators were before they were evacuated. Officer Goodman’s bravery and his ability to react under pressure during a crisis likely saved lives and is to be admired. Thank you, Officer Goodman. That’s it. That’s all I want to say today. See you in February. Peace.

Recap in the Key of Phoebe – This is the one where Phoebe battles her smoke detector, Rachel battles Tag over who dropped the ball with the mailing to Milan, Ross battles Joey on who is going to risk their life to get down from the roof, Chandler battles Monica on who can keep the other up when they are the one who can’t fall asleep, and the last time I checked this was still America.

Chan Man Quip of the Week – [The Setup] Monica and Chandler are cuddling in bed after sleeping together in the wee hours of the morning on the night where they kept each other up all night. Monica says, “That really was some of your best work.” Chandler responds, “Hm, hmm, I told you!” [The Knockout] Chandler then looks at the clock before firing off this juicy little classic Channy quip, “I can’t believe that I’ve only got two hours before I call in sick for work.”
​
#TheChickAndTheDuck