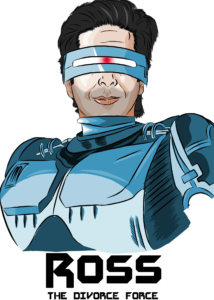 Friends S7:E11 – Happy new year, Friendsters! Today, with this first post in the January following that rotten, no good, very bad Year 2020, I thought what better way to start off this amazing, cleansing chance we’ve been given for a fresh start than with a nice, piping slice of Friends 20/20 fiction. What do you think, class? Hearing no objections, let us begin and it goes a little something like this: Once upon a time the kingdom of Centralperk was thrust into crisis when an unruly gang called The Dessert Stealers rode in from the northern hamlet of White Plains to storm the castle. The leader of the Dessert Stealer gang, an evil wizard called Big Daddy, was hellbent on conquering Centralperk and wasn’t above resorting to dark magic to achieve his objective. Ironically, Big Daddy was the twin brother of another prominent wizard, Gandalf, but the two brothers had had a falling out at Wizardry College when Big Daddy became jealous of Gandalf’s popularity. You see, Gandalf had a reputation for being the funnest wizard to party with in all of the land and was selected to rush Phi Cappa Cauldron, the most prestigious fraternity at Wizardry College. Meanwhile, Big Daddy (who entered college as Krandalf, a socially awkward Wizard) was not selected to rush a frat. Enraged with jealousy of his twin brother’s social status, Krandalf stole Gandalf’s book of spells and used it to both transform himself from the socially awkward Krandalf to the smooth-talking Casanova Big Daddy (as he rebranded himself) and to banish Gandalf from the kingdom of Centralperk for all of time. Having just ridden into Centralperk with his gang the Dessert Stealers, Big Daddy knew the key to his plan for conquering the kingdom was to disrupt the nuptials of Princess Regina to the renowned inventor, David the Scientist Guy. He knew that executing his plan prior to the wedding was key because once Princess Regina and David the Scientist Guy were married, David was planning to invent and build an impenetrable security system for the castle that would ensure peace and prosperity in Centralperk for generations to come. Riding in from White Plains to disrupt the nuptials on Princess Regina’s wedding day, Big Daddy and the Dessert Stealers executed their plan by luring Princess Regina to a dungeon that they tricked her into believing was the beauty salon where she had booked an appointment to get her hair and nails done for the wedding. Once the Dessert Stealers had captured Princess Regina, Big Daddy cast a spell on her that transformed her to a hideous creature called Broad Back. The key to the plan wasn’t to repulse David the Scientist Guy (who would have still happily married his bride as Broad Back knowing it was really still Princess Regina on the inside) but rather trap Broad Back in the dungeon for all of time because her back was indeed so broad, she couldn’t fit through the dungeon door to escape. With the wedding delayed and the kingdom likely at risk to fall to Big Daddy as the new ruler, David the Scientist Guy called on the only hope left to restore order…he summoned the might warrior known as The Rossatron. The Rossatron was the most powerful knight in the entire known world and his reputation as a super hero was known from one edge of the world to the other. It is not known whether The Rossatron jumped on his white horse and galloped into Centralperk or if he simply put on a cape and flew in himself (for expediency, of course) but regardless, minutes before Big Daddy was officially going to seize the thrown, The Rossatron burst into the castle and defeated Big Daddy in a duel during the notorious battle that would later come to be know as The Stand at Purple Point (The Rossatron also fought off and defeated the rest of The Dessert Stealers). Once the Rossatron had defeated Big Daddy and the Dessert Stealers, he forced Big Daddy to reverse the spell allowing Broad Back to transform back to Princess Regina. With Big Daddy and the Dessert Stealers looking on from the stalks nearby, Princess Regina married David the Scientist Guy and The Rossatron even had the generosity to stick around and officiate. David the Scientist Guy invented his security system for the castle upon returning from his and Princess Regina’s honeymoon and the kingdom of Centralperk indeed was able to enjoy peace and prosperity for generations to come. One more thing I forgot to mention. The Rossatron also just so happened to attend Wizardy College way back when. In fact, he and his roommate Chandy were also members of the Phi Kappa Cauldron fraternity and great friends with Gandalf. When The Rossatron defeated Big Daddy at The Stand at Purple Point and forced him to reverse the spell on Broad Back, he also secretly (while no one else was looking) forced Big Daddy to reverse the spell banning his brother, Gandalf from the Kingdom of Centralperk. Therefore, once that spell was also lifted, Gandalf was able to return to Centralperk in order to PARTY with The Rossatron and Chandy. They PARTIED dude. It was epic. In fact, it was so epic that everyone (except Big Daddy and The Dessert Stealers) lived happily ever after. The End. Happy New Year, y’all!

Recap in the Key of Phoebe – This is the one where Monica forces Ross to make her his “plus one” for their cousin Frannie’s wedding (because she wasn’t invited), Chandler and Rachel live outside of the law by repeatedly eating cheesecakes intended for Mrs. Braverman downstairs, Phoebe makes Joey feel guilty for standing her up to go on a date, Joey in return makes Phoebe feel guilty for rushing through dinner with him so that she can go on a date with David the Scientist Guy while he is only in town for one night, and apparently the kisses on the lips from Aunt Millie just so happens to be the kryptonite for our super hero, The Rossatron.

Chan Man Quip of the Week – [The Setup] Chandler is sitting at his and Monica’s kitchen table eating cheese cake alone when Rachel comes in the apartment. She says, “hi” while Chandler immediately invites her over, responding with, “Hey, you have got to try this cheesecake.” Rachel resists, explaining, “Oh, ya know I’m not that much of a sweet tooth. I…” Before she can finish, Chandler sticks his fork with a bite of cheesecake in her mouth. After tasting it, Rachel changes her tune exclaiming, “Wow. My God, so creamy. Oh my God, this is the best cheesecake I have ever had. Where did you get this?” As Rachel is looking at the cheese cake box, Chandler sheepishly answers, “It was at the front door. When I got home. Somebody sent it to us.” Seeing the address on the box, Rachel has Chandler caught in the lie and lets him know by saying, “Chandler, this is not addressed to you. This is addressed to Mrs. Braverman downstairs.” Shocked, she continues by calling Chandler, “Thief!” Doing his best to rationalize his behavior, Chandler explains, “I…no! I didn’t read the box before I opened it. And you can’t return a box after you’ve opened the box.” Rachel asks, “Why, why not?” [The Knockout] Attempting to make up for the obvious and serious character flaws in question with some quippy charm, Chandler answers, “Because it’s too delicious.”
​
#TheChickAndTheDuck

Next post: Last Time I Checked This Was Still America