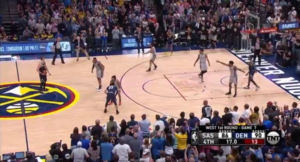 Like a Rolling Stone – It was a different world, it was another life. Perhaps, in a cruelly poetic way, this was the bridge from the stability of a world that had sustained for decades to the chaos of a new world that awaited on the horizon just past the point of visibility. The San Antonio Spurs fought nobly to hang on to that past stability, to the order of a world that for Lonnie Walker IV, the Spurs youngest player, was the only world he had ever known. When Patty Mills aggressively advanced an outlet pass to a streaking Bryn Forbes for a dunk that cut the Denver Nuggets’ lead to two points (88-86) with 52.2 seconds remaining in Game 7, having clawed our way back from an abysmal 13 point first quarter performance and a deficit that ballooned to 17 points in the third quarter, the continuation of stability and order was well within our reach. Full stop with one stop for a chance to advance to the Western Conference Semifinals for the 17th time in 21 seasons under Gregg Popovich. Could we get just one stop?  After a Nuggets timeout, we received our answer…unfortunately it was not the answer we had been hoping for and Jamal Murray, Denver’s super-talented point guard, was more than happy to be the bearer of our bad news.  With 36.8 seconds remaining, Murray sank a 14-foot floater to extend the Nuggets’ lead back up to four (90-86). Of course, as coldblooded and devastating as Murray’s dagger was, all hope was not yet lost. In his first season headlining the post-Kawhi-defection-Spurs, DeMar DeRozan had had no issues putting the team on his back in clutch situations. Nothing was about to change during a First Round Game 7. Only eight seconds later, DeMar got to “his spot” deep in the paint and rose up for a shot to cut the lead to two with enough time left (28 seconds) for us to have the opportunity to play defense without fouling. Sadly, that opportunity never ultimately came to fruition as DeMar’s shot was blocked by Torrey Craig, one of Denver’s better wing-defenders. Nuggets superstar center Nikola Jokic recovered Craig’s block shot giving possession back to Denver.  While the blocked shot was obviously devastating to the Spurs’ chances of advancement, once again…all was not yet lost. Down four, the Spurs still had the opportunity to play the “foul game” and given the Nuggets’ collective playoff inexperience coupled with the added pressure of an elimination game, it was reasonable to hope that Denver might miss free throws and help keep San Antonio’s door open to make up the four point deficit in the final 25 seconds.  What happened next, though, was inexplicable. For some reason, the Spurs elected not to foul and allowed Denver to run the shot clock down under five seconds before Murray ultimately shot and missed. It seemed that Coach Pop was calling for the foul from the sidelines but our players on the court seemed to just have a collective mental meltdown by allowing the Nuggets to run the clock down. Even though Murray missed, it was too late by the time DeMar got the rebound given that we were still down four points. There was only one second left when DeRozan got control of the ball and realizing that it was over, he didn’t even attempt a desperation shot before time ran out and San Antonio’s season was over. On April 27th, 2019, the Denver Nuggets eliminated the San Antonio Spurs in seven games (4-3), winning the decisive game 90-86 at home at the Pepsi Center in Denver. Rudy Gay was the player of the game with 21 points and 8 rebounds off the bench. Without the veteran swingman’s contributions throughout the game, the Spurs wouldn’t have had the opportunity to be within striking distance to steal the series down the stretch.  Spurs teams past regularly came up with the stops necessary to advance in the playoffs. The 2018-19 Spurs didn’t and in falling short, this group, despite their grit, finally allowed the bonds of our past to succumb under the weight of an offseason transaction that changed the trajectory of our future.  The new world was no longer just past the point of visibility on the horizon, the new world was here.

Fast forward 25 months and a lot has happened.  First (but not foremost), this, the Black & Silver post for the 2019 Western Conference First Round, Game 7, is brazenly pushing out the limits of what constitutes a timely game recap. If you are a regular reader of the blog series, it will probably not shock you to know that I’m unapologetically defiant (borderline gleeful) to be pushing those limits. After all, one of our guiding principles here at theLeftAhead is that time is an illusion. Of course, I wouldn’t have had to push the limits out this much had an unfortunate incident of playing an uneven number of games during the pandemic resulted in the unlucky math that eliminated the Spurs from competing in the 2019-20 NBA Playoffs in The Bubble in Orlando, FL last fall and also ended San Antonio’s record-breaking streak of 22 consecutive playoff appearances. Like I said, a lot has happened in the 25 months since the Spurs 2019 Game 7 defeat at the hands of the Nuggets. A new world indeed. Zoom forward a little bit more into this season and we find a couple of more examples of our beloved Spurs adjusting to the realities of this new era. The season started off on a very positive trajectory and there was hope that last season was just a blip (and not the new normal). There were positive indications that we were in position to establish our return to being a perennial postseason lock through much of the season with the team reaching a season-high mark of five games over .500 and holding the fifth-seed in the standings on Valentine’s Day. Then, unfortunately, the COVID-19 pandemic reared its ugly head. We were never the same after losing five players to health and safety protocols in late February. To make matter worse, having had six games postponed due to protocols also meant that our schedule post-All-Star break was the most brutal in the league playing 40 games in 68 days without one instance of consecutive days off in the second half of the season. More tribulations came as the Spurs decided to buy out LaMarcus Aldridge (one of the last remaining links to the old world Spurs) on March 25th when we couldn’t find a suitable trade partner before the deadline. I was happy to see LA sign with the Nets so he could have a chance to compete again for a title but then really bummed when he was abruptly forced to retire on April 15th due to a reoccurrence of his heart condition. (I enjoyed watching you go to work on the block in SA for six great years, LA. Amazing career. Health is more important than basketball so I wish you a long, healthy retirement.) As if we had not already endured enough adversity, we lost Derrick White to a season-ending ankle sprain at the end of April. All of this adversity resulted in the Spurs going from five games over .500 to six games below .500 and ending the season as the 10th seed entering the newly-created NBA Playoff Play-In Tournament. Tonight, we face a familiar division foe in the Memphis Grizzlies at the FedEx Forum. The Grizzlies hold the 9th seed in the play-in tournament so they get home court advantage for tonight’s game. If we win tonight, we will get to play the loser of tonight’s game between the 8th seed Golden State Warriors and the 7th seed Defending Champion Los Angeles Lakers on Friday. Win that game and we earn the 8th seed and get to face the Utah Jazz in the First Round of the playoffs. Quite a task in front of us but the good new is that there is no expectation for us two win two games in a row to “make the playoffs” so we might as well play loose and see what happens. In the end, we are officially in this new world of playing the underdog rather than being the perennial powerhouse and it’s kind of exciting to be in this new position. There are advantages to our new world. Tonight is going to be a lot of fun. Nothing exemplifies the transition into a new era of Spurs basketball more than an event that took place this past Saturday (May 15th). If you’re a reader of this blog and a Spurs plan, the aforementioned event need not be named (but I will share a video from it below). All I need to say is thank you ? thank you ? thank you ? thank you ? thank you ? Tim Duncan. And on that note, time to start preparing for the game tonight. Even as an underdog, we still have the winningest coach in NBA history in our corner (regular season and playoffs combined) so I like our chances to play loose and enjoy the “lack of expectations” and maybe get hot and shake up the 2021 Western Conference Playoff race. If we are successful in sneaking our way into a First Round series with the Utah Jazz, all I can say to the fans of the teams ahead of us who may feel that their squads were more deserving is sorry, not sorry.