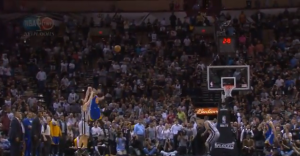 Warriors, come out to play (e-ay) – Well, they sure did. Stephen Curry lived up to the hype, torching the Spurs for 44 points and 11 assists last night. Curry broke a close game wide open in the third quarter by going absolutely bonkers. He had 22 points in the period, compiling that insane total by hitting ridiculous shot after ridiculous shot. It didn’t matter who we threw at him or how close our contests were on his jumpers, everything was working for the NBA’s newest sensation. When we started trapping him on the perimeter he made the proper reads to get the ball to an open teammate. The Spurs trailed by 12 points after three quarters and the crowd at the AT&T Center seemed shell-shocked by what was occurring.

Things weren’t looking much better for much of the fourth quarter. With four minutes remaining in the game, San Antonio still trailed by 16 points. I talked to several Spurs fans today that said that they had checked out of the game and went to bed or changed the channel by this point. Luckily for me, I’m the type of fan that hangs in until the bitter end (especially in the playoffs) and embraces the misery of getting beat. Miraculously, last night was one of those special moments where everything fell into place to allow the #BlackAndSilver to comeback in a game that they had no business coming back in. Kawhi Leonard started making plays on offense and defense. Tony Parker came alive and started attacking the rim. And Danny Green hit a super-clutch game tying three with less 30 seconds left in the game, capping an 18-2 run that forced overtime.

With the Spurs stealing all of the momentum to force the game into overtime, I thought that Golden State might come out blurry eyed and lose their ability to compete after having to deal with the dejection of blowing another seemingly insurmountable lead. To their credit, this was not the case as they battled the Spurs rally for rally and shot for shot throughout the extra period. Despite the fact that the Spurs had been, for all intensive purposes, playing without Tim Duncan since the end of the third quarter (Timmy was still battling a stomach bug) including the amazing rally to close the fourth, you could tell they were starting to figure out Golden State by overtime. Kawhi was figuring out how to defend Curry on one end and Tony was figuring out how to break down the Warrior’s defense on the other. Somehow, Golden State was able to hang tough and tie the game with just a few seconds left. This set up Manu Ginobili to be the hero, as the Spurs ran isolation for him at the end of overtime. Manu got a good look, but couldn’t put it in. Double overtime.

Things started looking dicey as the Spurs fell down by 5 points early in the second overtime. But once again, the Spurs fought their way back with Boris Diaw hitting a big three to keep the game within reach. The Warriors were becoming visibly tired as the period wore on and the Spurs, playing the aggressors, were able to retake control of the game with around one minute left. San Antonio had built their lead to as many as 6 and were still up 3 with about 40 seconds left in the game when Manu Ginobili happened. Inexplicably, with 11 seconds left on the shot clock, Manu pulled up from 4 feet outside the three point line and attempted to seal the game with one shot. The results were catastrophic as Golden State immediately turned the ricochet off the rim into a quick fast break finger roll by Curry. Still up by one, the Spurs came back down and Tony Parker missed a layup because of heavy contact (the referees could have easily called a foul) and the Warriors sprinted back down to get the ball on the break to Kent Bazemore, of all people, to score his first playoff basket on a lay up to take the lead. Timeout, Spurs down one…3.4 seconds left. Everyone, at this point probably knows the rest. Manu Ginobili happened again.

San Antonio Spurs 129, Golden State Warriors 127 in double overtime. After the game, Spurs Coach Greg Popovich was quoted as saying, “I went from trading him on the spot to wanting to cook him breakfast tomorrow.” It goes without saying that Manu Ginobili was the player of the game. Manu did what only Manu can do. After almost wasting a historic comeback by needlessly trying to seal a game with one shot that the Spurs were at an advantage to win already, Manu came back and sealed the game with one shot. This was one of the most incredible NBA playoff games that I’ve ever seen and I’m glad that I watched every single second of it. Having Manu seal it with one of the more memorable of his plethora of memorable clutch playoff shots was nothing but classic.