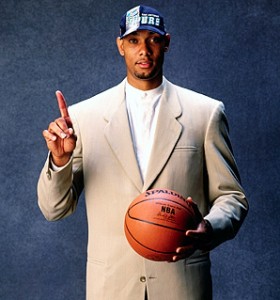 One More Time – Potentially seconds away from the roof being blown off the building, and with the AT&T Center the loudest I have ever heard it in all of the countless visits that I have made inside the arena that Tim Duncan built, 18,000 people were simultaneously stricken with the same nightmare. What was setting up to be one of the most special places to be in America late last evening, somehow became one of the worst places to be in America. I have never experienced a more violent swing in emotions during a sporting event and I have never seen a more dazed and confused group of people clear an arena and rightfully so. Losing a tight game and squandering an opportunity to eliminate your opponent is always rough. But this was something entirely different. The post-game AT&T Center scene was so other-worldly bizarre that it quickly became dangerous. Generally, there is a heavy rush to the parking lot immediately following the final buzzer of a game, but usually some people leave early and others hold back to wait for the crowd to dissipate. Quite literally, everyone was trying to get the hell out of that building all at once. The last time I was pushed in the back that many times in a crowd was on the rope line at a 2008 Obama for America campaign rally waiting to shake then Senator Obama’s hand. Spurs fans were pushing, clawing, grabbing, and yelling at each other in an effort to get through the exits so that they could breathe again. This is a natural reaction to experiencing all of the air being sucked out of a building, but it was quite a chilling experience to go through nonetheless. My wife and I tried our best to stay calm and move with the flow of the crowd down the escalators and through the lobby towards the exits, but it became increasingly difficult. Some of the more inebriated amongst the herd were cursing the refs, the Heat, and the world without any regard for their proximity to children. To make matters worse, I counted at least three or four Miami Heat fans who were senselessly baiting the crowd and gloating to anyone who would listen. It is one thing to attend an actual game and root for the road team, but to attend a watch party hosted by a franchise for its fans, root for the opponent, and then gloat to the gathered masses after we’ve just suffered one of the most excruciating defeats imaginable; classless. Although, I didn’t actually see any of them get jumped, there were definitely some heated exchanges going on between dejected Spurs fans and these clowns. I guess in any crowd of people this size you will always find a handful of lunatics exercising the same amount of sense as a chihuahua barking at a pack of wolves. Hopefully, none of them were actually physically harmed so that they can get what’s coming to them in the form of karma. After all, there is one more game to play. So enough about them, more so than the handful of Heat fans baiting the masses, it was the aggravation that Spurs fans were displaying towards each other over our inability to move through the crowd and get outside that was escalating the most tempers. A woman almost pulled me down by the shoulder screaming hysterically about how she needed to get out of here. I let her by, trying to keep my arm on my wife’s shoulders in front of me, but I sternly reminded her about the news flash of the year…”everyone really needs to get out of here.” Another woman, a few yards behind me in the crowd, was pushed into another fan who turned around unquestionably agitated. That fan proceeded to push the first woman and it seemed as if the incident was tinkering on the verge of setting off a riot. Luckily, there was a very large gentleman (must have been 6’4, 300 pounds at least) who was near enough to the altercation that he was able to put himself between them and diffuse the situation. Of what I witnessed, this was the closest that the building evacuation process got to devolving into utter chaos but the entire walk felt as if it could happen at any moment. While the loss itself was indescribably disappointing, the thing that was truly heart breaking was seeing our community momentarily turn on each other and regress back to an “every man for himself” mentality when we had been so close to getting to instead experience a harmonious departure from the arena, filled with dancing, hugging, and back slaps, and into the streets of San Antonio to join our friends and neighbors as we all continued to celebrate well into the night like a family.

San Antonio Spurs fans had the right to be angry, confused, dejected, and sad last night after the game. Given the stakes and our proximity to victory, it was the toughest defeat I have personally ever experienced in my 28 years as a Spurs fan. The Game 7 loss to the Mavericks in 2006, the Game 5 loss to the Lakers in 2004, and the Game 6 loss to the Rockets in 1995 were all up there, but having the trophy so close within reach that we could almost scrape a finger nail on it? The cruelty of this one is utterly excruciating. And that has spilled over into a citywide hangover through out the day today. The entire city seems to be sleepwalking in a zombie-like transient state. But it has to end tonight when we go to sleep. Tomorrow is a new day. The saving grace to the cruelty of this loss is that it comes with an immediate chance for redemption. Also, if someone had told Spurs fans at the beginning of the season that we would be getting to play one Game 7 in the 2013 NBA Finals with a chance to win our 5th championship, we would have all been thrilled about the opportunity to put another banner up in the rafters of the AT&T Center. There are 48 minutes left in our season and we should be confident that our ball club will seize this moment. The San Antonio Spurs still lead the Miami Heat 596-584 (cumulative scoring) in the Finals and we have, for more time in this series than not, proven that we are a deeper, more well rounded, and, yes, a better basketball team than our opponent. Tim Duncan, last night’s player of the game, has clearly saved something in his tank for this moment. Timmy had 30 points and 17 rebound trying to get the thing done last night. I would be shocked if he does not repeat or improve on that performance tomorrow night in Game 7. By the way, San Antonio is 0-2 in this series in games that have been officiated by Joey Crawford, we are 3-1 in games that have not (including 1-0 on the road). Joey Crawford will not be officiating Game 7. On a historical note, no road team has won a Game 7 in the NBA Finals since the 1978 Washington Bullets defeated the SuperSonics in Seattle. While this seems discouraging, to me this seems to suggest that the road team is due. Also, the #BlackAndSilver have not lost back-to-back games with Tim, Tony, and Manu in the lineup since December 12th and 13th. This is a longer period of time without losing back-to-back games than the constantly referenced streak the Heat have been on since January 8th and 10th. But more than anything, the reason to remain optimistic about our chances on Thursday night is that I genuinely sense that our players and our city want this title more than those counterparts in Florida. As excruciating as it was to be in that AT&T Center after the final buzzer had sounded last night, I had never experienced so much excitement and so much hunger for a victory in any sporting venue that I have ever been in as I did during last night’s game at the AT&T Center, and the game wasn’t even being played on the court down below us. The crowd was going bonkers and the noise level was deafening when the Spurs took a 5 point lead in the final minute on a Tony Parker floater, it was utter pandemonium. This city and our players are so hungry for a championship and it seems more than reasonable to me that Miami and its players will not have the capacity to reach down deep enough to match that hunger tomorrow night, having won a championship last year.

I spent a lot of time last night at the AT&T Center peering up at the four championship banners in the rafters. I know that the energy that was in that building last night (while greater than any I had ever experienced) will pale in comparison to the energy that will be in it tomorrow. Tomorrow night, the city of San Antonio will be so hungry for a championship that we will be loud enough for the greatest winner of a generation, Tim Duncan, to hear our screaming on South Beach and use it as fuel to make that one final push that will hopefully put championship banner number five up in the rafters of a building that will one day have his statue on its grounds. Before this series began, while congratulating the Miami Heat on winning the Eastern Conference, I suggested that this match up would be an epic clash of champions. The 2013 NBA Finals have certainly lived up to that prediction. I also proposed, “may the best team win.” I am utterly convinced at this point in time that the San Antonio Spurs are the best team in this series. Although tomorrow’s game will be the hardest leg of this journey, it will also be the final one. Game 7 is an amazing opportunity for the Spurs to prove that we are the best team in the series by absorbing the body blow of the toughest loss in franchise history and countering it with a resounding upper cut and delivering it with such fury that it produces aftershocks which resonate in our community and the annals of basketball history forever. Our best basketball of the season has yet to be played. It’s always darkest before the dawn. Shake it out.