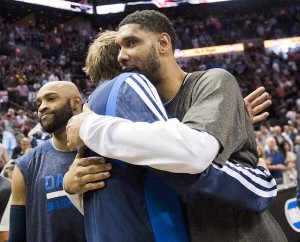 Wild International – The San Antonio Spurs organization should strongly consider sending a case of HEB salsas to Paul Pierce of the Brooklyn Nets, as a small token of our appreciation. Pierce provided a valuable assist in the effort to save the Spurs season yesterday afternoon when he blocked Kyle Lowry’s driving layup attempt at a series clinching game winner for the Toronto Raptors in their first round match up with Brooklyn. The Nets narrowly escaped in Game 7, 104-103, to win the series four games to three thanks to seasoned playoff veteran Pierce’s blocked shot. What bearing did this play have on San Antonio’s Game 7 match up with Dallas? I’m glad you ask. Throughout NBA playoff history, the home team has won 80 percent of all of the Game 7’s that have been played. There were an unprecedented 5 first round Game 7’s that were taking place this past weekend which meant that the statistical odds were that four out of five of the home teams would win their series. Three of those Game 7’s had been played on Saturday and heading into Sunday, the home team (Indiana, Oklahoma City, and LA Clippers) had won all three. While I highly recommend the book, I didn’t need to reread Nate Silver’s The Signal and the Noise

to figure out that there was a strong statistical likelihood that either the Brooklyn Nets or the Dallas Mavericks were going to win a Game 7 on the road on Sunday. The statistical likelihood that they would both win or that neither would win dropped dramatically as either occurrence would have been an anomaly. Therefore, while preparing for the Spurs game (which was the second game of an ABC double header) I became the biggest Brooklyn Nets fan that you could imagine, rooting for them to be the one road team out of five (20 percent) that wins Game 7 and thus putting the statistical odds strongly in the Spurs favor that we would take care of business at home. While I have always liked Paul Pierce’s game and was kind of bummed this year to see him in another uniform other than Celtic green, I’m really glad that he was playing for the Nets yesterday. You don’t want to leave anything to chance in a Game 7, so Pierce’s heroics went a long way towards putting my mind at ease about the Spurs’ prospects for the game that I thought was about to begin after the Brooklyn victory.

The NBA apparently had other ideas. While I was watching the events leading up to The Truth’s huge assist for the Spurs, unbeknownst to me (and probably a lot of Spurs fans) the NBA and ABC had started the Mavericks-Spurs game and were airing it on ESPN 2 but were doing so without properly informing the ABC viewing audience. I had assumed that if the Nets-Raptors match up ran long, that ABC might start the game and air it on ESPN so I had been flipping obsessively over to ESPN, but every time that I switched they were still airing softball so I assumed that the league was delaying the tip of our game until the end of regulation in the other game. It wasn’t until the final minute of the exciting finish in Toronto that someone at ABC finally had the brilliant idea to flash an alert across the scroll on ABC to let viewers know that the game in San Antonio was airing on ESPN 2. I immediately flipped over to find that I had missed the first five minutes of game action. While I was extremely perturbed, I was glad to see that the Spurs had a 7 point lead when I flipped over. Whatever caused the delay on the part of the NBA and ABC on alerting the audience of the tip of Mavericks-Spurs game was an epic fail that hopefully will be addressed and resolved so that it doesn’t happen again later in the playoffs. As a die-hard Spurs fan and with all of my superstitions, I do not appreciate missing one possession of the Spurs’ postseason (much less five minutes of a crucial Game 7) so the NBA and ABC should feel extremely fortunate today that it worked out that the Spurs had a lead by the time that I caught wind of the error and switched to the broadcast.

But enough about statistical probabilities and television snafus. While these things added to the nervousness surrounding yesterday afternoon’s festivities, they were quickly forgotten by Spurs fans by early in the second quarter when it became abundantly clear that the San Antonio Spurs had no intention of leaving the arena last night carrying the dubious distinction of becoming the first franchise to be eliminated twice in the first round of the NBA playoffs as a one seed. There would be no repeat of the 2011 first round heartbreak against Memphis as the Spurs ran away and hid from the Dallas Mavericks in a dominant 119-96 blowout victory that served as a purposeful reminder to the rest of the playoff field that we were, indeed, the best team in the NBA during the 2013-14 NBA regular season. For the first time this postseason, San Antonio played Spurs basketball for 48 minutes and never allowed the outcome of the contest to come into question. Save a brief Mavericks run at the beginning of the third quarter in which they were able to employ a small lineup to cut the lead to 14 points, the Spurs utterly dominated the game and maintained 20 plus points of separation for most of the second half. Player of the game, Tony Parker, was breathtaking, carving up the Dallas defense for 32 points on 11-19 from the field and 10-13 from the line. Dallas repeatedly, in their desperation, resorted to committing extremely hard fouls on Tony and Manu’s drives to the basket but both players shook off the unnecessary roughness and continued attacking the cup the entire night. Tony was having so much fun that he even had an out-of-body experience when he jumped into the face of former Spurs teammate turned series villain, DeJuan Blair, to talk trash after crossing DeJuan over off the dribble and leaving him more frozen than Donald Sterling’s Clippers franchise assets. Tony received an uncharacteristic technical foul for his antics but it was well worth it to Spurs fans who were able to enjoy a little payback for our pent up frustration with DeJuan’s antics throughout the series. After the game, Tony and DeJuan both said that it was all in good fun and that they remain close friends despite the rivalry.

I had predicted in my post on Saturday that, based on the way the series had unfolded, the Spurs were due for a blowout victory in Game 7. I was extremely relieved but not surprised at all that we were able to play at a level to achieve exactly what I had predicted. While the Spurs offense had inexplicably sputtered during the first part of the series and had gradually been revving up over the past few games, it was finally back to full speed in Game 7 as five players scored in double figures en route to the blowout. The Spurs finally performed at an elite level on defense as well holding Dirk Nowitzki (who was 4-0 in Game 7’s in his career coming into yesterday) to 22 points on 8-21 shooting and shutting down red-hot Monta Ellis, who mustered only 12 points on 3-11 shooting. Tim, Tony, Manu, and Coach Pop now hold a 3-2 career record in Game 7’s and this one served as a tiny bit of sweet redemption for the heartbreaking overtime loss to Mark Cuban, Dirk, and the Mavericks in the 2006 Western Conference Semi-Finals. Tim Duncan is now 4-2 against Dirk in the playoffs, further elevating the stature of his legacy to greater heights above and at the expense of one of the fiercest rivals of his career and another all-time great player. It was magical to see these legendary warriors go to battle in another classic playoffs series, but I must say that as a Spurs fan, it was extremely satisfying to watch Timmy increase his upper-hand over Dirk by eliminating the Mavs in such resounding fashion.

It seems, at least for the first game, that the lucky Spurs charm that my friend Matt presented to me on Friday night worked beautifully. The Spurs were not snake-bitten by the likes of bad refereeing, miraculous shot-making, or strange bounces of the ball that might have swung the outcome of the game and series. I wore the lucky charm on my wrist and not only did it protect the Spurs from basketball voodoo curses but it seemed to allow me to channel some amazing memories that kept me smiling throughout the game. As I savored the emphatic way that the #BlackAndSilver closed out the series, I looked down repeatedly at that little charm on my wrist and reflected on some of those memories that I wrote about my friend Brian in my first post from this year’s edition of Black & Silver. Brian, Matt, and I watched many a Spurs-Mavericks playoff game together and I’m sure that I am safe in speaking for Matt, as well as myself, that those are some splendid memories that won’t be forgotten anytime soon. I remember that the two teams that Brian enjoyed beating the most in the playoffs were the Los Angeles Lakers and these Dallas Mavericks. Each time that we played the Mavericks in the playoffs, Brian really got in the spirit of the in-state rivalry and loved participating in some lighthearted joshing back and forth with Mavs fans. In particular, Brian embraced expressing some good-natured disdain for Mark Cuban during each of these previous match-ups. Matt, Brian, and I often watched Spurs-Mavericks playoff games out at one of our favorite San Antonio pool halls or bars and there were always Mavericks fans at these establishments (cheering obnoxiously for their team) and we somehow always seemed to find ourselves interacting with them (ladies and gentlemen, that somehow also goes by another name, and that name is Alcohol). It was always in good fun, but for me and for Brian as well, there was nothing better than getting the last laugh of the night over Mavs fans after watching a hard-fought Spurs victory out in the city. Knowing Brian, and after witnessing Mark Cuban’s hilarious over-the-top celebrations after the Mavericks Game 3 and Game 6 victories, I know there would have been a great deal of satisfaction to be had by him in the way that the Spurs shut down Big D with an overwhelming and dominating performance yesterday afternoon. Right now, Brian would be smiling and perhaps contemplating a public service announcement, “we ain’t messing around this year, we coming to take that back.” Next up: the Portland Trailblazers. If yesterday is any indication, the San Antonio Spurs have finally rounded into playoff form and will be ready for the challenge. Oh, and Paul Pierce. Enjoy that salsa, my man. We owe you one. That Green Sauce is the best.