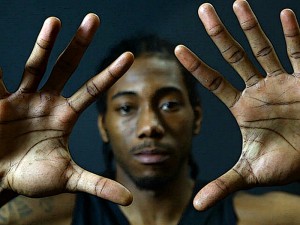 Heirplanes – In another brilliant performance, two-time NBA all-star and first-time MVP candidate Kawhi Leonard took the air out of the Staples Center last night with a suffocating all-around display of his versatile skills as a basketball player. The Los Angeles Lakers seemed flabbergasted with their inability to contain Leonard on either end of the court as Kawhi, who is this generation’s closest attempt at reincarnating the talents of Scottie Pippen, went for 24 points on 8-12 shooting, 14 rebounds, 7 assists, 6 steals, and 5 blocked shots in 38 minutes of play. The San Antonio Spurs now have a commanding 3-1 lead in this Western Conference Semifinal series, defeating the Lakers 107-89, and Kobe Bryant’s hopes of having one more opportunity to return to the NBA Finals (before his impending retirement at the end of this season) with newly acquired teammates Kevin Love and Russell Westbrook seem to be slipping away. The Spurs, on the other hand, are rounding into playoff form once again and, thanks to the emergence of Leonard, have an excellent opportunity to make what most experts six months ago would have dismissed as another improbable run at capturing the 2016 NBA Championship.

Ladies and gentleman, I’ve just been afforded the rare opportunity to peer into the future and what I have seen could shake the foundation of the conventional wisdom that the NBA Analyst Industrial Complex was built upon. What I have seen could very well threaten the very existence of any future relationship between the two concepts “NBA Expert” and “Credibility.” What I have seen, ladies and gentlemen, which could potentially burst the entire NBA ‘talking heads’ bubble which has been expanding year after year to allow more and more participants to amass huge piles of cash simply by regurgitating the lazy and baseless argument that the San Antonio Spurs are too old, is that THE FUTURE IS NOW. In another brilliant performance, future NBA all-star and future MVP candidate Kawhi Leonard electrified the AT&T Center crowd last night with a breathtaking all-around display of his versatile skills as a basketball player. The Portland Trail Blazers, who opted to try to contain Tony Parker by guarding San Antonio’s all-world point guard with the bigger Wesley Mathews, were punished for the decision by Leonard who punched the clock to collect 20 points on 8-9 shooting (4-4 from downtown), 5 rebounds, 2 steals, 2 blocked shots, and player of the game honors in only 28 minutes of play. In large part because of the performance of the third-year future superstar, our old-as-dirt Spurs (who most experts predicted would run into problems with Portland’s youth and athleticism) recorded our third blowout victory in a row defeating the Blazers 114-97 to take a commanding 2-0 lead in the Western Conference Semifinal series.

While this series is far from over, and the Blazers are perfectly capable of using the energy from their own frantic crowd and their imposing home court advantage at the Moda Center to return the favor by winning both of their home games, could we at least please pass a law that bans NBA analysts from continued employment if they keep insisting on regurgitating this tired argument that the Spurs are old? It is simply not true. Yes, Tim Duncan (a.k.a. Time’s Father) and Manu Ginobili (a.k.a. Time’s batshit crazy uncle) are “old” by NBA standards but they are both playing exceptionally well during this playoff run and are extremely energetic right now because they just finished their fifth regular season in a row where they were provided with measured rest. Tony Parker is still in his prime at age 32 and The Big Three is surrounded by young talent. Of the other Spurs who are playing major minutes in the playoffs, Boris Diaw is 32, Tiago Splitter is 29, Marco Belinelli is 28, Danny Green is 26, Patty Mills is 25, and Kawhi Leonard is freaking 22 years old. The San Antonio Spurs are not an old basketball team. The average age of the Spurs is 28.5 which, by comparison, makes a Miami Heat team practice (with the Heat’s average team age of 30.3) look like an AARP convention. Combine that with the fact that the Spurs rotation players played the fewest minutes of any team in the league in 2013-14 with no player on the squad averaging even 30 minutes a game and you have yourself a situation where the vast majority of the national media members who cover the NBA professionally have exactly no idea what they are talking about with regards to this squad when factoring age into our title prospects.

As stated above, the Blazers are a talented group that have the physical talent to get right back in this series over the next few days. However, if the #BlackAndSilver can weather the initial burst that Portland will come out with tomorrow night from the urgency of playing with their back up against the wall and because they will be fueled with extra adrenaline from the energy of their home crowd, the best road team in the NBA will have a reasonable opportunity to impose our will over the course of the 48 minute game and put ourselves in the position to erase any of our opponent’s belief that they can still win the series by taking a commanding 3-0 lead. The future is now and if Kawhi Leonard can spend the next few days continuing to take positive steps in his inevitable development into becoming an NBA superstar, the Spurs will simply put one too many weapons onto the court for the Blazers to have the ability to stop. Sure, in the end, the NBA analysts are right; time is the enemy. But it works both ways. The Portland Trail Blazers may just be too inexperienced to be ready for a moment that they might very well be ready to thrive in after a couple more trips to the playoffs and a couple more years down the road. So sure, time is the enemy and one day time will catch up to Tim Duncan and the Spurs, too. But for right now, during the 2014 NBA playoffs, I think that it is much more the enemy of the good folks who are getting ready to host their first Western Conference Semifinal game in 14 years tomorrow evening up in the Pacific Northwest than it is for those of us who will be down here sipping margaritas on the River Walk in preparation for the game. Time is certainly more the enemy, this season, of our good friends who will be slamming Jager Bombs on South Beach this weekend than it us for those of us over here in South Texas who know a little secret; when that inevitable day does come that time finally starts tapping Timmy on the shoulder, it will simultaneously be getting left in Kawhi’s perennial all-star dust. Sure, time is the enemy. But for the 2013-14 San Antonio Spurs, perhaps this time it is our greatest ally.