The Millners’ Farm in Connecticut 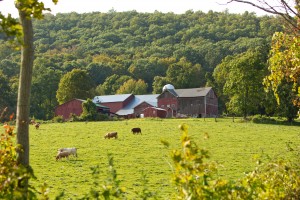 Friends S1:E3 – What’s good, Friends fans? It’s your boy, Ken Adams back again for this week’s installment of my blog series. I’m back for the third week in a row to serve you some fresh takes on a 20 year old pop culture phenomenon that is near and dear to our hearts. My Friends revival is already taking the interwebs by storm. Indeed, boys and girls, you have stumbled upon what we here in the biz call an instant classic. And if all 10 or 15 of you devoted readers out there who were adept enough to get in on the ground floor of the meteoric rise of Friends 20/20 could go ahead and inform the rest of the masses out there it would really be helpful in allowing future readers to interpret my tone as dauntless rather than sarcastic. To further incentivize your desire to participate in building the viral buzz surrounding my mad blogging skills, this post is going to be short and sweet thereby strategically limiting the commitment I am asking of you this week as a reader. The reason for this (other than getting you on my side by giving you the goods efficiently) is that, as I’m sure will happen from time to time, there are no Gandalf Gaffes to report in this episode. With so few established truths at risk of contradiction because of the small history of only two episodes to review, the Friends writers escaped this one unblemished. So thank you for giving me the next two minutes of your time, enjoy the read, tell your friends, rep the hashtags on Twitter…#TheChickAndTheDuck, check back next Monday, and holler at your boy when you see me in these streets.

Recap in the Key of Phoebe – This is the one where Phoebe accidentally receives $500 dollars in her bank account which leads her down a path where in trying to rectify the mistake… she ends up with $7000 dollars as compensation for finding a thumb in her soda, Chandler starts smoking after having been an ex-smoker for three years, Monica starts dating Alan and the gang adores him which makes Monica conflicted when she decides to break up with him, Ross mourns the loss of his dog Chi Chi, Rachel learns “dating language,” Joey rehearses to play a death row inmate in a play, and Chandler agrees to re-quit smoking in exchange for Phoebe’s $7000 dollars.

Chan Man Quip of the Week – [The Setup] Monica, midway through the episode, beginning to tire of Alan asks everyone if they think that Alan is sometimes, “a little too Alan.” Rachel responds, “Well, no. That’s impossible. You can never be too Alan.” Ross also chimes in, “Yeah, it’s his, uh, innate Alan-ness that-that-that we adore.” [The Knockout] Chandler gleefully agrees, “I personally could have a gallon of Alan.”