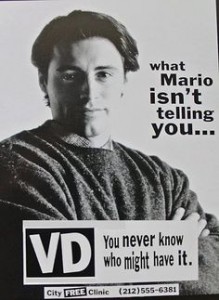 Friends S1:E9 – “Here I go, here I go, here I go again. What’s my weakness?” Snow…apparently. Let me explain. So I had driven up to Vail, Colorado this past Friday to do some research for this week’s blog post. My plan was to spend one night up in the mountains, finish my research on Saturday morning, and leave Saturday afternoon to drive down to Denver in time for a very important meeting that I had scheduled for Saturday night with a prospective publisher. In case I haven’t mentioned it already, my new plan to get out of my ridiculous commitment to write 236 Friends blog posts for theLeftAhead over the next ten years (and the seemingly endless string of hard deadlines attached to the project) is to land a book deal to write the great American novel. Ted James, my editor, has graciously made an agreement with me. If I can present him with a book contract from a reputable publisher that provides me with an advance to write a novel, he will absolve me of my responsibilities on the Friends blog series and hire another writer to complete the project. Since this solution will allow me to keep my job with theLeftAhead and will also get me out of the minutia of my weekly grind, I have accepted the challenge and started soliciting meetings with publishers. So back to the weekend. I was having a lovely time up in the mountains. The “research” I was conducting was proving extremely fruitful. I was checking out the Vail ski resort so that I could better understand the disappointment that Rachel must have felt in this week’s episode when she missed her flight to meet her family there for Thanksgiving. I wanted to experience the exhilaration of “shoop, shoop, shooping down a ski run so that I would have a point of reference to write accurately about this storyline. Hey, don’t judge me. I just go where the research takes me. If that happens to be one of the world’s premiere ski resorts, so be it. So, yes, I called in some favors and arranged a private ski lesson on Saturday morning so that I could better relate to Rachel’s passion for the sport. (On a side note, did you know that a private ski lesson costs about $900.00 a day at Vail? Did you further know that Vail Resorts only pays ski instructors a pittance of an hourly wage even though it is the instructors’ expertise that allows the company to gouge their well-to-do customers and make money hand over fist? Luckily, theLeftAhead paid for my ski lesson out of my research budget otherwise a lowly blog writer such as myself could never afford the luxury of a private ski lesson. But it got me to thinking that if I were a ski instructor, with that type of specialized professional skill set, I would probably give some serious consideration to organizing a union rather than continue to put up with such blatant exploitation.) The ski lesson that I received on Saturday morning was phenomenal and I came away from the experience prepared to write an amazing blog post this week but as I was preparing for my trip into Denver to take my publishing meeting, disaster struck. A monstrous snow storm blew into the Vail area Saturday afternoon and I was advised that I would be putting my life at risk if I attempted to get on I-70 and make the drive through the mountain passes and back into the city. While I briefly contemplated doing it anyway, reality quickly set it and I realized that I couldn’t land a book deal if I lost control of my car and drove off of a mountain on the way to the meeting. I was stuck in Vail for the night and I wasn’t going to be able to take my publishing meeting. I tried to call to reschedule but the publisher more or less told me that that was my one opportunity to pitch my book and I blew it. So because I had spent my morning conducting research for this Friends blog series (a tedious assignment that yields no relief until 2024), I blew my shot to take a meeting that could have landed me an opportunity to get off the project. Oh, the irony. So, what’s my weakness? Snow. Okay, then.

Recap in the Key of Phoebe – This is the one where Rachel tries to earn enough tips to meet her family in Vail to go skiing for Thanksgiving, Ross and Monica find out that their parents have decided to go to Puerto Rico for Thanksgiving so Monica offers to cook Thanksgiving dinner at her apartment, Joey gets disinvited to his family’s Thanksgiving because he appears on posters around the city for a PSA campaign as Mario (a strapping young fellow who also happens to have VD), Phoebe’s Thanksgiving celebration with her grandma isn’t until December because her grandma’s boyfriend is lunar, Chandler doesn’t partake in traditional Thanksgiving cuisine or customs, and Rachel misses her flight to Vail after the gang gets locked out of the apartment watching Underdog get away and thus is unable to fulfill her hope to spend Thanksgiving going shoop, shoop, shoop.

Gandalf Gaffes – As an avid television viewer, one of my biggest pet peeves is when a television series interchanges one actor for another to play a recurring character. It really bugs me. I know it’s irrational because actors are human beings with free will so obviously I understand that there are a variety of reasons for why this may happen and many of them are out of the showrunner’s control. I also understand that, for our purposes here, a show’s writers should not be held responsible for discrepancies in the casting department but still…I don’t care. Because it is such a big pet peeve of mine, I’m going to ignore logic and hold the Friends writing staff responsible for the recasting of Carol Willick (Ross’ ex-wife) in Season 1, Episode 9 by penalizing them with a Gandalf Gaffe. Friends originally cast Anita Barone as Carol. She appeared in Season 1, Episode 2. The Carol character does not make another on screen appearance until this week’s episode and when she returns, she is played by Jane Sibbett. Sibbett plays Carol for the duration of the series and makes appearances in a total of 16 episodes. Apparently, Anita Barone chose to leave a role on one of the biggest shows in television history to find a more “full-time” acting job. How did that work out for you, Anita? At any rate, even though this recasting offends my sensibilities to the extent that I’m tempted to slap it with a level three infraction, because it is unfair of me to hold the writers responsible for this discrepancy and it in no way affects the laws governing the Friends fictional universe, I will be reasonable and adjudicate it as a level one infraction.

Gandalf Gaffe #3: The actress portraying the character of Carol Willick changes from Anita Barone to Jane Sibbett from S1:E2 to S1:E9.

Chan Man Quip of the Week – [The Setup] Joey, having recently discovered that his likeness is being used by a Public Service Announcement campaign to inform the public about Venereal disease, enters Monica and Rachel’s apartment and sullenly asks the gang to, “set another place for Thanksgiving.” He continues, “My entire family thinks I have VD.” [The Knockout] Chandler peers whimsically into the distance and remarks, “Tonight, on a very special Blossom.”