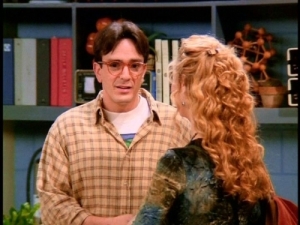 Friends S1:E10 – Hey there, Friends Nation. Did you miss me? I hope that your time off from reading this blog series has been as restful and relaxing as my time off from writing it. I can’t lie, it was quite a relief last month to have finally arrived at the first break from consecutive episodes of the series. While I’ve really enjoyed these past four weeks off, I must admit that I’ve missed you guys and I am quite happy to be back (even if it is just for this one week). Since this is our only episode back until 2015, I’m glad that we are luckily being treated to an episode that introduces us to two of the series more iconic characters: Marcel the Monkey and David the Scientist Guy. Marcel bursts on to the scene like a supernova and lights up the television screen for the remainder of Season One and for the first part of Season Two. Ross adopts this adorable little monkey after Marcel is rescued from an animal testing research laboratory and hijinks ensue over the course of this episode as well as seven upcoming ones. Every time that Marcel is on the screen, he steals the show. David the Scientist Guy, on the other hands, is introduced in this episode as Phoebe’s love interest but is quickly shuffled off to Minsk to pursue a research opportunity. While David’s appearance is brief, it is also memorable enough that (spoiler alert) he returns for four more episodes much later in the series and plays a crucial role in the writers’ ultimate series arc for the Phoebe character. Since my credentials as a Friends aficionado cannot be disputed, I’m sure that you will trust my judgement to rank both Marcel and David in my top ten most important secondary characters in series history. Therefore, having two of the top ten secondary characters of all-time introduced in the same episode makes this a pretty special occasion. So on that note, rather than ramble on for another paragraph about my own personal issues (you know…like updating you on the drama with my boss or telling you about how during my break I got in a fist fight with a Seinfeld blogger at our monthly poker game over which was the superior series) I’ll encourage you to re-watch this hilarious episode sometime during this holiday season and wish you and yours a very excellent, happy New Year. On to the recap, see you in 2015.

Recap in the Key of Phoebe – This is the one where Phoebe meets a guy at Central Perk after stopping in the middle of her acoustic set to scold him and his friend for chatting too loudly while she was playing, Ross adopts Marcel (a monkey that a friend of his rescued from a research lab), Chandler proposes that all six friends make a pack to not get dates for New Year’s Eve and just hang out together, Joey gets passed over for a seasonal job as Santa Clause and instead gets hired as an elf, Rachel gets assaulted while trying to hail a cab, Monica is forced to babysit Fun Bobby after he arrives at the New Year’s Eve party immediately after finding out his grandfather had died, and Phoebe falls madly in love with David the Scientist Guy but then forces him to break up with her on New Year’s Eve because he will be leaving for a three year grant-funded research assignment in Minsk.

Chan Man Quip of the Week – [The Setup] Ross has just brought Marcel (the monkey) over to Monica and Rachel’s apartment to introduce him to the gang, announcing, “Guys? There’s somebody I’d like you to meet.” Marcel is standing on Ross’ shoulder as everyone comes over to have a look. Monica is clearly freaked out by Marcel’s presence but Rachel is excited by how cute he is. Ross explains that his friend Bethel rescued Marcel from a lab and Phoebe suggests, “That is so cruel!” She then ponders, “Why would a parent name their child Bethel?” [The Knockout] Chandler walks up to enter the conversation and remarks, “Hey, that monkey’s got a Ross on its ass!”

Featured Image Source: The Guy With The Glasses