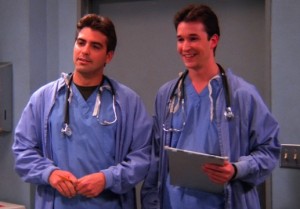 Friends S1:E16 & Friends S1:E17 – “Sometimes I feel like I don’t have a partner. Sometimes I feel like my only [Friends]” are the my friends from TV, the Rosses and Rachels. Lonely as I am, they stay by my side. Yo, yo, what it do, ladies and gents? Hope you enjoyed my nice little jingle, just now. For the record, I’m not currently lonely…I’m happily married but I do remember times back from my single days when staying home on a Saturday night would make me feel lonely but binge watching Friends on DVD truly would make me feel better. So, during those times when I couldn’t get a date, I could always rely on being able to hang out with Monica, Rachel, Phoebe, Chandler, Ross, and Joey. They were always there for me. For that matter, listening to the Red Hot Chili Peppers made me feel better too (back in those days). The Chili Peppers were always there for me too, so mashing the two together seemed oddly appropriate. But enough about the ties that bind and my depressingly pathetic past, this week we are tasked with dissecting (count ’em) two episodes of the show (if you want to be technical about it). In actuality, “The One with Two Parts” is a one hour-long episode for all intensive purposes. So, while it is listed as two episodes on IMDB, “The One with Two Parts” has one continuous plot and since it is presented on the DVD edition as one episode, that is how we will treat it. Plus, if you think that I’m going to put in twice the work (for no extra money) and write two Friends blog posts on the same day, I’d say you’ve probably been hanging out under the bridge with Anthony Kiedis.

Now that we’ve established that we’re dealing with a one hour-long continuous episode and not two independent half-hour episodes, lets dive right into the meat of today’s subject matter. This episode, while one of the more entertaining and well-written from Season One, was also clearly one where the writer’s room was heavily influenced by NBC executives. Probably in an effort to persuade fans of the network’s other hit shows to start watching Friends, the NBC brass turned this episode into a cross-promotion extravaganza of biblical proportions. Stars of both Mad About You and ER make cameos in this episode. Helen Hunt and Leila Kenzle appear at Central Perk (presumably playing their Mad About You characters) and mistake Phoebe for Ursula (Lisa Kudrow’s character on that show). George Clooney and Noah Wyle appear in a hospital scene and later at Monica and Rachel’s apartment (presumably playing their ER characters). What Jerry Seinfeld and Jason Alexander couldn’t get any run? Come on, NBC. If you’re going to sell out…sell out all the way. While the cameos were a little over the top (a Seinfeld cameo withstanding), I give the writers credit for not allowing them to steal too much focus away from a cleverly written episode that involved major story lines for all six of our main characters (see the Recap in the Key of Phoebe below). One Mad About You cameo that paid off in spades, however, was the one made by Lisa Kudrow, herself. This is the first episode of Friends in which Phoebe’s aforementioned twin sister Ursula Buffay makes an appearance. Lisa Kudrow’s quirky waitress character first appeared on Mad About You in an episode titled, “Married to the Job” in 1993. Brilliantly, NBC decided to create a continuous universe between the two show’s by making Ursula a part of Friends as well. What better time to introduce her to the show than the episode in which NBC has already chosen for cross-promoting Mad About You? While Ursula dates Joey on her first Friends appearance, she goes on to play an important role as a reoccurring character throughout the series run. Ursula is played on Friends as an entirely self-centered character which often works well to contrast against Phoebe’s generosity of spirit. We learn a great deal about Phoebe because of Ursula’s presence on the show and it delightful that what seemingly started as a gimmick, ended up working brilliantly to add a depth of character to Phoebe because Lisa Kudrow was given the creative freedom to repeatedly explore both characters. So there you have it: two Friends episodes for the price of one blog post. And Ted James (my editor) thought I should be worried about an audience backlash to recapping two episodes in one post. Well, in case you are feeling a little short changed…perhaps I can win you back over with the little added bonus of Red Hot Chili Pepper’s Under the Bridge video? I embedded it below. Besides, I told my boss, “I never worry.” Now that is a lie. Peace.

Recap in the Key of Phoebe – These are the ones where Joey asks Phoebe’s permission to date Ursula (her twin sister), Ross begins doubting his ability to be a good father while having difficulties getting Marcel to behave, Chandler gets a crush on Nina (one of his employees) right before his boss asks him to fire her, Rachel sprains her ankle and conspires to commit insurance fraud with Monica to pay for it while also deciding to go on a double date with a couple of cute doctors who work at the “scene of the crime,” and Joey kisses Phoebe while she is pretending to Ursula in order to give her friend a proper break up so he can begin to heal from the heartbreak of losing the magic he had found under the bridge.

Ugly Naked Guy Watch – The gang watches Ugly Naked Guy use a hula hoop. This is part of a conversation that takes place in Spanish during the closing credits.

Chan Man Quip of the Week – [The Setup] Joey is at Central Perk talking to Ross and Chandler about taking Ursula out for her birthday. After they remind him that is is also Phoebe’s birthday, Joey (sounding exacerbated) asks, “Oh, man. What’re the odds of that happening?” Ross responds, “You take your time” as Joey stares off deep in contemplation. After a few seconds, when Joey shows in his face that he has connected the dots that Pheobe and Ursula have the same birthday because they are twins, Chandler remarks, “There it is” and then asks, “So what’re you gonna do?” Joey answers, “What can I do? Look, I don’t want to do anything to screw it up with Ursula.” Chandler continues his questioning of Joey, “And your friend Phoebe?” Joey defiantly responds, “Well, if she’s my friend, hopefully she’ll understand” and then asks, “I mean, wouldn’t you guys?’ [The Knockout] Chandler stares down Joey and informs him, “Man, if you tried something like that on my birthday, you’d be starin’ at the business end of a hissy fit.”