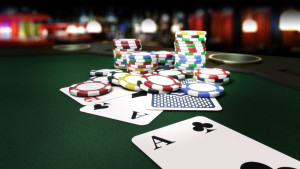 Friends S1:E18 – How’s it going, ladies and gents? Happy Monday. I hope everyone out there is ready for another exciting installment of the most unorthodox blog series about a major American television series in the history of the internet. While we don’t have a great deal of time today, I thought I would use what little time we have to speculate about whether or not love is in the cards for Ross and Rachel. In order to do that, let us first open up our textbooks to quote from one of the greatest poker movies of all-time: “Listen, here’s the thing. If you can’t spot the sucker in your first half hour at the table, then you are the sucker.” Mike McDermott, who narrated this famous quote from Rounders, may have played against his fair share of “suckers” but, as we come to find out in the legendary Friends poker episode, he would have been hard-pressed to find one at a table with the likes of Ross Geller and Rachel Green. These two are a pair (no pun intended) of gambling titans who nobody would mistake for “suckers” when they square off mono y mono and go all in on a hand that, not only has a significant sum of money riding on it, but also, seemingly, moves their entire relationship to the center of the table. Rachel, having just lost a shot at her dream job and determined to put an end to Ross’s chauvinistic behavior, goes all in with nothing to lose. Ross (on the other hand), still desperately in love with Rachel and lacking the courage to do anything about it, goes all in with everything to lose. In the end, Rachel is victorious which in the larger sense is also a victory for Ross. He seems genuinely pleased to take part in Rachel’s happiness. We will never know for sure if Ross threw the hand to allow Rachel a moment of triumph during a difficult time (but, yes we kind of know he threw the hand). So I guess, actually, even though Mike McDermott would not have been able to spot a gambling “sucker” within his first half hour at a table with our beloved Friends, he would have been able to spot a “sucker” in another sense of the word. Yep, he would have spotted that Ross Geller is a “sucker” for love (Awe…you see what I did there?) and based on his selfless gesture at the end of the poker game, I have a sneaking suspicion that love might be in the cards for Ross and Rachel after all. (Double awe…you’re welcome, dear readers. Feel free to bask in the warmth of my sentimentality as you continue on down into the recap.) See you again next time. I hope your week is aces (over kings).

Recap in the Key of Phoebe – This is the one where Rachel gets an interview for an Assistant Buyer position at Sak’s Fifth avenue, Joey weeps when he loses at Poker Night which prompts the girls to ask the guys to teach them how to play poker, Monica enlists her Aunt Iris to give the girls Poker lessons after they lose their first game with the guys, and Ross borrows money from Chandler and Joey to call a bet in which Rachel borrowed money from Monica and Phoebe but (feeling sorry for Rachel after she didn’t get her dream job) “loses” the hand to the Big Green Poker Machine.

Chan Man Quip of the Week – [The Setup] The gang is playing poker at Monica and Rachel’s apartment. Phoebe (being Phoebe) observes, “You guys, you know what I just realized? ‘Joker’ is ‘poker’ with a ‘J.’ She then asks, “Coincidence?” [The Knockout] Chandler sarcastically points out, “Hey, that’s… that’s ‘joincidence’ with a ‘C’!”

Next post: President Obama Speaks at the 50th Anniversary of the Selma Marches