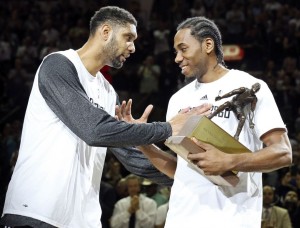 Deliver – ¡Viva la Fiesta! Going into the AT&T Center in San Antonio as the road team and winning a playoff game is a difficult proposition. Going into the AT&T Center as the road team and winning a playoff game during Fiesta? There are few things harder in the NBA. Obviously, it is not impossible. Last year, the Dallas Mavericks came into our home during Fiesta and stole Game 2 of the 2014 Western Conference First Round series in convincing fashion winning 113-92. The Mavericks, however, had experience on their side. Dallas had been playing road playoff games in San Antonio during Fiesta for years. They knew what to expect. Last night, the same could not be said for the Los Angeles Clippers. Unfortunately for the Clips, not only was last night a road playoff game in San Antonio during Fiesta, but it was a road playoff game in San Antonio on the 2nd Friday of Fiesta and a young Spurs superstar was accepting the Defensive Player of the Year trophy from the greatest player in franchise history before the game. Poor L.A. never stood a chance. The San Antonio Spurs annihilated the Los Angeles Clippers 100-73 in front of 18,582 Fiesta-rowdy Spurs fans last night at the AT&T Center. The entire team seemed to feed off of the energy of Tim Duncan presenting Kawhi Leonard with the DPOY trophy before the tip-off. It was a spectacular team defensive performance. The Spurs held the Clippers to 34.1 percent shooting for the game (29-85) and bottled up Chris Paul (7 points [3-11], 6 turnovers) and Blake Griffin (14 points [6-15], 3 turnovers). It was a complete dismantling of the best offense in the NBA and the fewest points scored by LAC in a playoff game in franchise history.

The Defensive Player of the Year was determined to make sure and remind us that he plays both sides of the court. Forget Bruce Bowen and move over Scottie Pippen because last night the Claw was trying to reincarnate the way a young Michael Jordan played both sides of the ball early in his career with the Chicago Bulls. Kawhi was sensational on the offensive end, scoring a career high 32 points (13-18 from the field). He added 4 rebounds, 3 steals, and 2 blocks for good measure. It wasn’t just the scoring proclivity or efficiency, it was the types of shots Kawhi was taking to score the basketball that harkened back to his Airness in his prime. Leonard destroyed the Clippers on multiple occasions with turn-around fade away jumpers over the double team. Who else in today’s NBA has that patented Michael Jordan weapon in their offensive arsenal? Kobe Bryant, and that’s pretty much it. It was a strange site to see. A young superstar playing the game of basketball like Michael Jordan and Kobe Bryant in a San Antonio uniform and while staying within the flow of the Spurs’ offensive system, no less. Utterly incredible. Not only was the player of the game being like Mike with the fade-away mid-range jumpers, but he went 3-5 from deep (Bulls vs. Blazers, 1992 Finals anyone?), oh… and this happened.

Because of the spectacularly embarrassing performance last night, the Clippers could prove to be an extremely dangerous wounded animal come tomorrow afternoon. I fully expect the same type of bounce-back performance from Los Angeles in Game 4 as San Antonio put together for Game 2. If the #BlackAndSilver are prepared for the desperation that is sure to come from our opponent and we are able to play the same type of focused team ball tomorrow that we played last night, I’m hard pressed to see how the Clippers (as a team) could play at a level that could add their names to the short list of teams who have come into the AT&T Center and beaten the Spurs in the playoffs during Fiesta. Chris Paul and Blake Griffin can play at the necessary level, but who else can join them at that level on the road? While it is hard to see the scenario where DeAndre Jordan, J.J. Redick, and Jamal Crawford all play at the necessary level tomorrow to beat the champs in our building, I’m certainly not ruling it out. As I’ve said before, there is no doubt that the Clippers are a talented and dangerous group. Even after last night’s performance, I’m still sticking to the notion that this is the best first round opponent the Spurs have faced in the Gregg Popovich / Tim Duncan era. We must come out tomorrow afternoon with a sense of desperation and play like we are the team in this series that is playing from the 1-2 hole on the road. But with Kawhi Leonard’s superstardom currently feeding off of the energy of Fiesta and erupting like Mount Vesuvius to rain scorching lava down on the NBA city of Pompeii…I mean L.A., I think I like our chances in Game 4.