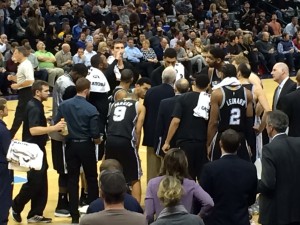 Pompeii – Against my better angels, I did it. I’ll admit it. I know better, but somehow it still happened. I’ve been to this rodeo way too many times and yet I still couldn’t help myself. How does the proverb go? As a dog returns to its vomit, so a fool repeats his folly. Yep, that about sums it up. I allowed myself to get overconfident after the 27 point blowout victory in Game 3, so I let my guard down for Game 4 and then bam. Just like that, the Clippers hit us right back like a mack truck. So long, euphoria. Hello, misery. In what felt like the blink of an eye this afternoon, a lethargic crowd at the AT&T Center watched a lethargic San Antonio Spurs squad get out worked by the Los Angeles Clippers and lose 114-105 to squander an opportunity to put a stranglehold on this Western Conference First Round series. After the incredible effort put forth to “get the one we needed” in California last Wednesday night, we’ve now allowed ourselves to fall back into a position where we need to get yet another victory in La La Land in order to win the series. Chris Paul (coming off the worst playoff game of his career) matched his spectacular Game 1 play with 34 points and 7 assists. Blake was a beast again too with 20 points and 19 rebounds. Finally, give the Clippers bench credit. They wouldn’t have been in such a strong position heading down the stretch in the fourth quarter had it not been for excellent play from Jamal Crawford and Austin Rivers (yes, I know…I couldn’t believe it either) giving them a boost every time the Spurs looked poised to go on a run. On our side, the player of the game was once again Kawhi Leonard. Whi posted 26 points, 7 rebounds, and 5 assists in the losing effort.

So how concerned am I over the squandered opportunity? I am concerned but not panicked. This had all of the makings of a grind-it-out series from the get go. When we went up two games to one in dominating fashion, it seemed like the Clippers might break if we had had the wherewithal to jump on them early today. And perhaps they would have but unfortunately, we’ll never know because (give them credit) they came ready to play this afternoon. We never had an opportunity to set the tone. In the end, the visions of an easy five game series running all over Cliff Paul and the State Farm Assist Team were just that…visions. Demented little visions, tempting me all weekend and successfully baiting me into overconfidence. Well, you were able to momentarily dupe me once again (you hideous demented little visions) but my lesson learned. Overconfidence has officially left my psyche for the rest of the 2015 playoff run. So yes, I’m concerned but not panicked. The Spurs have been in this position before. Home, away, first round, NBA Finals, it doesn’t matter. We’ve seen it all and faced every difficult scenario imaginable. More often than not, the #BlackAndSilver respond excellently following a disappointing loss in the playoffs. We have the necessary experience to regroup from this poor showing, respond with a vengeance in Game 5, and snatch home court advantage back just in time to force Los Angeles into playing a road elimination game. You don’t have to worry about me either. Come Tuesday night, I will be cheering with the appropriate level of fear. I’m over overconfidence. But confidence? That’s far from over.

Next post: Joseph Stalin is the Fiddler on the Roof