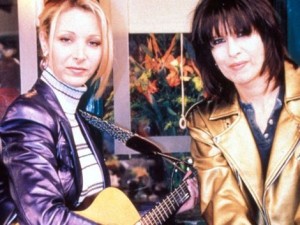 Friends S2:E6 – “There’ll be no strings to bind your hands, not if my love can’t bind your heart. And there’s no need to take a stand, for it was I who chose to start.” Is it just me, or have you also noticed that Angel of the Morning has been forever tattooed in your brain because of Friends. I find the song just randomly popping into my head, for absolutely no reason whatsoever, at the most random times. I could be in the middle of giving a presentation on the difference between pre-click and post-click email monetization to an auditorium full of digital media consultants and then…BAM. Out of no where, my brain is bellowing, “Just call me angel of the morning, angel. Just touch my cheek before you leave me, baby.” It can be quite distracting. No matter. We must fight through it and persevere. After all, there’s a blog post to write. So how you doing? It’s been two weeks since we last convened and I’m feeling super refreshed and recharged. Not only did we have the much needed week off last week but on top of that we were granted an extra hour of sleep yesterday morning. It was magnificent! I love Fall Back Day. And this year it even fell on Halloween night? It doesn’t get any more perfect than that. So, yes. I’m rested and ready to do this thing. We’ve got special guest musical performances in today’s episode. We’ve got mishaps with kiwi fruit in today’s episode. And, to top it all off, we’ve got the strongest Chan Man Quip of the Week that we’ve had to date. Let get started, shall we?

Today marks a major diversion from the standard Friends episode formula as Chrissie Hynde not only guest stars, but also performs a rendition of the aforementioned Angel of the Morning during the show. In 236 episodes of Friends, this is the only time that the writers decided to enlist a famous musician to perform a musical number as part of the script. Sure, we get plenty of musical performances from Phoebe, her collaborators, and even Ross throughout the series run, but devoting almost three minutes of airtime to allow a real musician to perform? Quite an usual change of pace. Perhaps the writers and show runners contemplated making this a recurring feature on the show and then abandoned the gimmick after trying it once and realizing it hadn’t worked the way they planned. Who knows? But there is no question that it threw off the rhythm of the episode. Please don’t misconstrue this as a dig against Chrissie Hynde or the song she performed. She is an excellent singer-songwriter and the fact that Angel of the Morning pops into my head out of nowhere quite regularly is a testament to the quality of the song. It’s just that inserting her performing that song into the middle of an episode of Friends is simply weird and clearly out of place. I give the Friends show runners credit, though. Between this and The Rembrandts I’ll Be There for You, they sure had a knack for picking music that has remained stuck in the collective heads of avid television viewers for twenty years and will probably remain there for generations to come.

I also need to give the writers a little bit of credit as well. Considering that they burned almost three minutes of today’s episode (14 percent of the episode runtime) on a guest musical performance, they sure did pack a great deal of hilarity into the other 19 minutes. This episode also features The Great Kiwi Allergy Outbreak of 1995. When Ross needs Monica to take him to the hospital after accidentally eating a kiwi lime pie, David Schwimmer is delivers a brilliant piece of acting with his performance of the way that Ross speaks with the malady. More importantly, this storyline (of Monica needing to take Ross to the hospital and Ross deciding to leave Ben in the care of Joey and Chandler) sets up (in my opinion) one of the funniest laugh out loud sequences of the entire series run. The exchange between Joey and Chandler in the New York City Department of Health Services office is simply next level brilliant. We will proudly feature it below as what is by a mile our best Chan Man Quip of the Week to date. After having seen it 100 times or more, the punchline that Mathew Perry delivers continues to have me rolling on the floor laughing every single glorious time that I watch it. For me, this is a top ten funniest moment on the show. I can already imagine myself chuckling from the mere act of transcribing it when I get to the conclusion of this post. I see no reason to further delay such a delightful moment of comical ecstasy. So my good friends, it was good to see you again. Happy November and onward (christian soldiers) to the recap we march.

Recap in the Key of Phoebe – This is the one where Rachel helps Phoebe get her gig back singing at Central Perk after she is temporarily replaced by a “professional” singer, Monica takes Ross to the hospital when he has an allergic reaction to her kiwi lime pie, Joey and Chandler leave Ben on a bus while watching him for Ross during the kiwi emergency, and Phoebe give Stephanie (the “professional” singer) the what for when she tries to take “Smelly Cat” from the top.

Chan Man Quip of the Week – [The Setup] Joey and Chandler are at the New York City Department of Health Services to pick up Ben after leaving him on a city bus. They realize that they have a serious dilemma when they discover that there are two babies in custody and they can’t tell which one is Ben. One of the babies is wearing a clown outfit and the other is wearing a duck outfit. Panicking, Chandler asks Joey, “What’re we gonna do? What’re we gonna do?” Joey (spitballing a solution) offers, “Uh, uh, we’ll flip for it. Ducks or clowns.” Unimpressed with Joey’s solution, Chandler questions, “Oh, we’re gonna flip for the baby?” Equally perturbed, Joey questions back, “You got a better idea?” Chandler relents and agrees to the half-baked solution, “All right, call it in the air.” As the coin is flipped, Joey blurts out, “Heads.” Chandler checks the results and reports, “Heads it is.” Relieved and believing the problem has been solved, Joey exclaims, “Yes! Whew!” However, Chandler quickly realizes that their efforts had been in vain and informs Joey, “We have to assign heads to something.” Joey takes a moment to think about it and after also realizing the error, he suggests, “Right. Ok, ok, uh, ducks is heads, because ducks have heads.” [The Knockout] Chandler responds (summoning every ounce of sarcasm he can muster), “What kind of scary-ass clowns came to your birthday?”