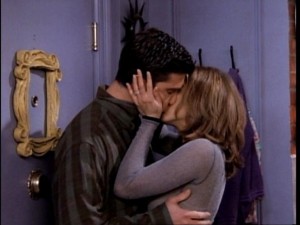 Friends S2:E14 – Howdy, cowgirls and cowboys. Long time, no see. (Considering that we last convened a short four days ago for the special Friends Super Bowl episode, let the record reflect that my previous statement was said in jest.) Regardless of proximity to our last encounter, it’s great to see all of you on this lovely Monday afternoon and let me also say Happy Iowa Caucus Day! If you’re a political junkie like me, you’re probably way too consumed by nervous anticipation for tonight’s proceedings to be too worried about dissecting an episode of television that first aired twenty years ago. The old me (and when I say old me, I mean the me that wrote Season One of this blog series) would have used something as massive as the Iowa Caucuses as an excuse to mail in today’s assignment and write as little as I could possibly get away with in order to complete the post. However, considering that “The One with the Prom Video” (today’s episode) is one of the most famous Friends episodes of all-time and further considering that I have grown this year into a model employee here at theLeftAhead, it would be hard to justify not doing our due diligence on this one. (Taking a moment to turn and yell over to me editor…You here that, Mr. James? Growth.) But just because our minds are distracted by the monumental political history that stands to be made just a few short hours from now, doesn’t mean we can’t channel our fixation on Iowa into the work at hand. For example, both the Republican and Democrat caucuses tonight appear to be very close and will likely both end up having a runner-up that comes just short of winning. That runner-up in each party (if the results are as close as they appear that they might be) will be forced to play that miserable game we call What If. Yes, indeed. Whomever comes up just short tonight (whether it be Trump or Cruz on one side, Clinton or Sanders on the other) will be doing the torturous dance of going through every little detail of every single possible thing they could have done differently to win. What if I had done this campaign event instead of that campaign event? What if I had spent more money on grassroots GOTV instead spending more money on television ads? And so it will go for the candidates that come up just short tonight. Therefore, in honor of the pour souls who will soon be playing the What If game in Iowa, I present to you a gigantic Friends What If visa vie the following: What if Jack and Judy Geller hadn’t decided to turn Monica’s room into a gym?

Recap in the Key of Phoebe – This is the one where Rachel rejects Ross when he pleads with her that they are meant to be together, Joey gives Chandler $812.00 and a ridiculously gaudy bracelet as a thank you for all of the financial support he’s received from Chandler over the years, Monica has to suck up her pride and tell her parents that she got fired from her job in order to try and borrow money from them, Phoebe uses a clever metaphor to encourage Ross in his attempt to rekindle the magic with Rachel, and it all pays off at the end when Rachel watches the prom video and then kisses Ross confirming that Ross was in fact right all along when he declared to Rachel, “You’re my lobster.”

Chan Man Quip of the Week – [The Setup] The gang is at Monica and Rachel’s apartment going through the boxes of Monica’s stuff that her parents had brought over. They discover a video in the box and decide to put it on. After the gang sees Rachel in a dress, Monica realizes what the video is of and reports, “You know what this is, this is us getting ready for the prom.” Rachel responds, “Oh.” Looking embarrassed, Ross immediately cuts in after that pleading, “You know what, you guys, we don’t have to watch this.” The gang, in unison, rejects Ross’ suggestion and continues to watch the video. A few seconds later, a heavier set Monica appears on the screen and Joey cries out, “Some girl ate Monica.” Offended by the insult, Monica fires back, “Shut up, the camera adds ten pounds.” [The Knockout] Chandler does not miss a beat in responding with one of his most famous sarcastic remarks of the entire series, questioning Monica with, “Awe, so how many cameras are actually on you?”