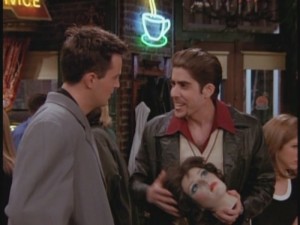 Friends S2:E19 – Howdy, ladies and gents. Greetings and salutations to all on this fine Monday morning. I hope everyone had a hopping Easter weekend. (You see what I did there? Hopping, as in Easter Bunny.) Isn’t March Madness a great time of year? Besides college hoops, spring is in the air, flowers are blooming, and birds are chirping. On top of it all, amazingly enough, our time together is once again drawing to a close. It’s hard to believe, but with this (our 19th post of Season Two) we’re rounding third and heading for home on our second seasonal installment of Friends 20/20. I can’t lie, I won’t be mad when it’s time for the season-ending walk off. But for now, we’ve still got plenty of unresolved drama to attend to. First, it appears that Chandler’s relationship with Eddie (his new roommate) has gone from bad to worse this week considering that our episode begins with Chandler discovering that the freak show has been watching him every night while he’s sleeping. This discovery is the final straw for Chandler who promptly asks Eddie to move out. Yet, despite Chandler’s best effort to get rid of Eddie, he keeps showing up back at the apartment each day doing weirder and weirder stuff while pretending like Chandler’s requests for him to move out never happened. Not only does Chandler get increasingly frustrated with Eddie’s complete detachment from reality, but he also becomes increasingly worried for his own safety. Crazy is one thing, but you don’t want to mess around with people who are certifiably bat shit like Eddie. Luckily for Chandler, financial problems that have arisen for Joey since losing his job on Day of Our Lives have made it difficult for him to continue to be able to afford his swanky apartment uptown. The timing couldn’t be better for a reunion of the BFROOMMATES ™ (or Best Friend Roommates, if you will) [you best believe I’m trademarking this] so Chandler and Joey concoct a plan to trick Eddie into thinking that Joey never moved out. The plan works magnificently (since Eddie really is crazy enough to believe that he might have imagined his whole time living with Chandler) and the psycho roommate is finally gone for good.

Also, this week, the ladies get really into a women’s empowerment book called Be Your Own Windkeeper. The book teaches them to read the signs when particularly men (but even other “goddesses”) are “stealing their wind” or, in other words, infringing on their unique individual expression. This is a hilarious mini-story line that brings about more than one laugh-out-loud moment including Rachel asking Ross, “How do you expect me to grow if you won’t let me blow?” and Ross predictably responding, “You, you know I, I don’t, have a- have a problem with that.” Eventually, Monica, Rachel, and Phoebe end up fighting with each other after taking a “goddess” quiz and realizing that they’ve all stolen each other’s wind at some point during the course of their friendships. In the end, however, they all make up because how could you stay mad at your BFROOMMATE ™ (or Phoebe, for that matter)? In the grand scheme of things, is being a leaf blower really that big of a deal? Be prepared to answer that and many other difficult questions when we return next week to take our midterm exam. Study hard, kiddos. This test will have essay questions and it will not be open book. Also, be sure to remember that the Netflix version of the series is the abridged version. Our test will cover all of the material from the DVD box set collection. Now that you’ve been given your instructions, farewell until next Monday. If you need me before then, my office hours are Tuesdays and Thursday from Never AM to When Hell Freezes Over PM. Just kidding. I’m always available for my students. But seriously, go already. You hear that? The bell is ringing.

Recap in the Key of Phoebe – This is the one where Chandler asks his psycho roommate to move out after he discovers that Eddie has been watching him while he sleeps every night, Joey gets mad at Ross after Ross suggests that he take a small part as a cab driver on Another World in order to pay his credit card debt, Monica, Pheobe, and Rachel bond and then fight over a women’s empowerment book called Be Your Own Windkeeper, and oh sweet Moses is Chandler relieved to finally be able to get rid of Eddie when he and Joey trick him into believing that Joey never moved out.

Chan Man Quip of the Week – [The Setup] Joey and Chandler are carrying the fake ceramic dog into the living room that Ross had paid to save from the repo man as a gift to Joey during his moment of need. Chandler happens to be carrying the rear of the dog in a somewhat awkward way. Chandler asks, “Hey look, are we gonna have to bring this out every time Ross comes over?” Joey responds, “He paid a lot of money for it.” Noticing the embarrassing way he is carrying the dog from the rear, Chandler reports, “I’m gonna hold him a different way.” He continues, “Look I don’t understand, if you hated it so much, why did you buy it in the first place?” Joey reasons, “Well, I had a whole ceramic zoo thing going over there but now, without the other ones, it just looks tacky.” [The Knockout] Chandler, addressing Joey as if they were discussing a real dog, looks at it (after setting it down) and asks, “So is he housetrained or is he gonna leave little bathroom tiles all over the place?” Then addressing the dog directly, he commands, “Stay. Good, stay! Good fake dog.”