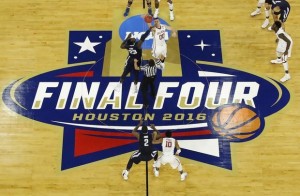 Friends S2:E20 – Hey there, Mercedes Friends. How’s everyone doing this fine Monday afternoon? Let me say up front that I am having quite a hectic afternoon, myself, so today’s post just might make it into the running for shortest Friends 20/20 blog posts to date. No, don’t worry, everything is okay (you are so sweet for asking, though). I’m not in the middle of any kind of serious crisis. Rather, I’m just drowning under the weight of facing deadlines on several of the various projects that I’m juggling at the moment. You know, the usual stuff that makes for a hectic afternoon for a professional blogger. But enough about me. I know what you’re really interested in today is the same thing that Chandler, Joey, and Richard were interested in during this week’s episode. Duh, it’s the college playoffs, right? More specifically, the NCAA Championship Game is being played tonight in Houston, Texas between the Villanova Wildcats and the North Carolina Tar Heels. How fired up are you for tonight’s game? Exactly, me too. Besides the fact that I’m still in the running to win theLeftAhead’s March Madness office pool, I’m hoping that the championship game offers much more excitement than the semi-finals because (let’s be honest) the Final Four games this past Saturday night were not memorable (as North Carolina won easily over Syracuse and Villanova came out and put the biggest blowout in Final Four history on Oklahoma). Perhaps, because the Final Four games weren’t memorable, the likelihood is increased that we will get an epic championship game tonight. Here’s to hoping that we get the type of nail biting, drama-filled game that the NCAA tournament is famous for. After the way that they annihilated Oklahoma, my money is on Villanova being the team that hoists the trophy when everything is said and done tonight (in case anyone was wondering). On that note, I must bid you adieu early today so I can go back to attending to my various pressures and deadlines. I won’t lie, part of the pressure is coming from making sure that I can get off work tonight in time to be home to watch the tip off for the big game. By the way, in case you were wondering, the midterm exam that we discussed last week was a joke. I really hope that everyone could sense the sarcasm in the previous post and didn’t spend the last seven days studying. If you did, my bad, but hey…you’re now better equipped to beat your friends at a Friends trivia game. Also, heads up because after this post we’ll be on a mini-break for two weeks. After the mini-break, we’ll return for the Final Four posts of Season Two. (Ha. See what I did there?) And ff you feel that you got short changed a little this afternoon, I promise I will bring the fire when we reconvene to make sure that we finish this season strong. As always, I appreciate your A1 loyalty to the blog series. Have a great week and I’ll catch you on the Hillary Clinton (in other words, all catch you on the flippity flop). Go Wildcats.

Recap in the Key of Phoebe – This is the one where Monica becomes jealous of Chandler and Joey for hogging too much of Richard’s time, Phoebe goes on a movie watching binge after discovering that her mother had shielded her from seeing the end of sad movies, Rachel and Ross say “I love you” to each other for the first time after fighting about Ross’ plan for them to move to Scarsdale and complain about the taxes, and (even though Richard has a great time being one of the guys) he realizes that Chandler and Joey see him as a father figure which ruins his desire to be hanging out with them even when it’s the college playoffs.

Chan Man Quip of the Week – [The Setup] Joey and Chandler are at their apartment playing Richard in foosball. Chandler, as he tries to keep Richard from scoring, yells out, “Kick save and… denied.” After reclaiming possession of the ball, Richard continues the commentary by announcing, “But… he gets it back, pass to the middle, lines it up and… BAM!” Richard’s shot goes in, so he continues, “Yes! Could that shot BE any prettier?” After witnessing Richard’s amazing skills, Joey interjects, “Man you are incredible.” Richard responds, “Well, we had a table in college.” [The Attempted Knockout] Chandler, visibly perturbed from the beating Richard just laid on him and Joey, fires back with, “Oh really, I didn’t know they had foosball in the 1800’s.” [The Counter Punch] Not to be outdone, Richard absorbs the blow and retaliates with, “Nice moustache by the way. When puberty hits that thing’s really gonna kick in.” Ladies and Gentleman, let the record show that on this…the twentieth episode of Season Two, for the first time in the history of the Friends 20/20 blog series, the Chan Man Quip of the Week has officially been rebuked and successfully countered. Well done, Sir Richard of Burke.