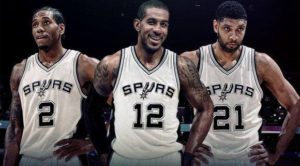 Ignition (Remix) – Merriam-Webster’s dictionary defines a remix as “a variant of an original recording (as of a song) made by rearranging or adding to the original.” As a musician, I love remixes because they have a funny way of making things you’ve heard dozens (or even hundreds) of times before feel fresh and exciting. As we parted ways this past July, I left with this feeling that I get when I first hear a remix to one of my favorite songs. While the third installment of this blog series had undoubtedly ended in abrupt, disappointing fashion, there’s also no question that it ended by striking a chord that (despite the agony of defeat) made things feel fresh and exciting. I had this overwhelming sense of anticipation because, as we parted ways this past July, we did so with the knowledge that our beloved San Antonio Spurs had landed LaMarcus Aldridge, the biggest free agent signing in franchise history. Combine that with having a young Defensive Player of the Year on a trajectory that the league hasn’t witnessed in a very long time (perhaps since the emergence of Scottie Pippen), a trajectory that’s ascendence is only heading toward’s one place: Kawhi Leonard: NBA Superstar. Oh, and throw in that same old, same old of three hall of fame players and a hall of fame coach. Ladies and gentleman, as we parted ways last July, we had our selves the potential to turn the 2015-16 NBA season into a serious recording session. As expected, our remixed Spurs did not disappoint and were phenomenal in the regular season en route to amassing a franchise record 67 wins. Throughout the course of this installment of the Black & Silver blog series, we will dive deep into all of the nooks and crannies of the 2015-16 San Antonio Spurs spectacular season. Nevertheless, it’s my intention to ease our way into this playoff run. We’re going to slowly build some speed in order to make sure this mack truck is barreling down the highway by the time May rolls around in a couple of weeks. Still wanting just a little bit more? Now usually I don’t do this, but go ahead and break ’em off with a little preview of the remix.

On Sunday night in front of a lively Fiesta crowd at the AT&T Center, the #BlackAndSilver obliterated the Memphis Grizzlies 106-74 to take a 1-0 lead in the Western Conference, First Round series. The poor, undermanned Grizzlies didn’t stand a chance against a team that had just tied the 1985-86 Boston Celtics’ NBA record of only yielding one home defeat all season to finish 40-1 at home. It’s bad enough for any team to go up against the biggest home court advantage in NBA history but let’s face it, with Marc Gasol and Mike Conely (arguably the Grizzlies two best players) unavailable for the postseason due to season-ending injuries, the task of repeating their 2011 magic and upsetting the Spurs seems dangerously close to hopeless. The remixed Spurs sure made it seem so in Game 1. Using a well rounded attack (five players in double figures), the Spurs carved the Grizzlies defense apart to shoot 51.9 percent from the the field and hold Memphis to 39.2 percent shooting. Kawhi Leonard takes home our player of the game honors for his work on both ends of the court. The Klaw poured in 20 points (8-13 shooting) on offense and paired that with four steals and three blocks on the defensive side of the ball. It was quite the stellar performance, indeed. One fitting of the magical first weekend of Fiesta. There is no better time of year and no better place to be than San Antonio during Fiesta to witness the Spurs home playoff opener and soak in all that Fiesta Oyster Bake has to offer. On a side note, happy 100th anniversary to Oyster Bake. While I couldn’t be in San Antonio myself to take in the festivities, I can imagine that the beer was flowing and the turkey legs were plentiful. Speaking of turkey legs, a wise sage named Russel Westbrook once said, “The Spurs are coming.” I’m happy to report that it once again, it feels that way down in Titletown, TX. It feels the same, but also fresh and new. Look out NBA, the Spurs are definitely coming. Idioteque.