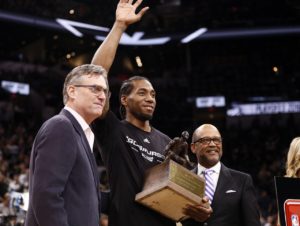 Idioteque – Ice age coming, ice age coming. Let me play both sides, let me play both sides. The NBA has been put on notice. The Spurs are coming. Not only are we coming, but (over this past season) our starting small forward completed his mutation from an ordinary White Walker into the best two-way player in the game. It has been quite a transformation for the quiet, humble kid from Riverside, California. To put it mildly, The Klaw is a beast. It’s safe to say that Kawhi Leonard is now grown. During the 2015-16 season, his game undoubtedly demonstrated most of its growth on the offensive side of the ball where he averaged 21.2 points per game to lead the Spurs in scoring for the second consecutive season (a 4.7 points per game improvement, however, over the 16.5 he averaged during the 2014-15 season). Boasting one of the most complete offensive games in the NBA is what’s new. What we already knew was reaffirmed this past Monday as Kawhi solidified his reputation as the best defensive player in the world by earning his second consecutive Defensive Player of the Year award. Congratulations are in order to Kawhi. With a NBA Finals MVP, two DPOY awards, and having made his first All-Star team this past February, Mr. Leonard seems to be locking down awards these days with the same ferocity that he puts on display while locking down the likes of LeBron James and Kevin Durant. Kawhi’s transcendence from a player chosen outside of the lottery to the franchise player of the most successful NBA team to lace ’em up over the past 20 years is one of the biggest reasons the Spurs were able to post a franchise best 67 wins this season. If asked about why he put in all of the extra work it must have taken to transform from quiet Riverside kid into Kawhi Leonard: NBA Superstar, I can only speculate that his answer would probably be, Manu made me do it.

On Tuesday, Kawhi, Manu, and the rest of the Spurs had the challenge of not allowing complacency to set in after a dominating Game 1 performance over a depleted First Round opponent. Luckily, the Spurs have an anti-complacency device that is omnipresent in the locker room and its name is Gregg Popovich. True to form, the #BlackAndSilver responded to whatever crotchety pre-game message Coach Pop delivered and eliminated any possibility that we would fall victim to complacency by playing suffocating defense once again against the Memphis Grizzlies on Tuesday night at the AT&T Center. By all objective accounts, we Grit & Grinded our poor challengers down to sawdust and when all was said and done and the dust had cleared, the Spurs had once again defeated the Grizzlies. This time, by a score of 94-68 in front of 18,418 raucous fans. In Game 1, San Antonio held Memphis to 39.2 percent shooting. In Game 2, we ratcheted the defensive intensity up another notch to hold the Grizzlies to a torturous 32.6 percent shooting. So far in this series, the Grizz are so overmatched that it just doesn’t seem fair. Nonetheless, the Spurs must continue to resist complacency’s temptation and go into Game 3 in Memphis tonight with the appropriate fear necessary to take a 3-0 series lead. While a sweep is never easy against any playoff opponent, if the Spurs can find a way to pull one off against the undermanned Grizzlies, we could give ourselves an added rest advantage over potential future playoff opponents Oklahoma City and Golden State (who have both already lost one game in their First Round series). Our Game 2 player of the game is Patty Mills. Patty was throwing mad shrimp on the barbie Tuesday night, shooting a blistering 4-6 from deep en route to 16 points off the bench. Good on ya, mate. That type of shooting from our back-up point guard is a critical ingredient to the formula necessary for the Spurs to make the type of deep playoff run we’re all hoping for this season.

Let me conclude my thoughts by mentioning that it was hard to write yesterday after hearing the news about Prince. I was hoping to complete this post and check it off my to do list yesterday, but after hearing the news I knew that that would be a futile endeavor. I find as an artist, when the light of one of the greats is extinguished in its physical form, rather than create, I’m drawn to basking in the light of the art itself, at least at first. Prince was a genius. Yesterday was not a day for creating. Yesterday was a day for walking outside and submitting to the showers of majestic purple that were lighting up skies around the world and allowing them to rain down upon you. In the inaugural installment of the Black & Silver blog series, the genius of Prince inspired to serve as the theme for one of my 2013 Finals posts. Funny that the 1999 themed Fourteen Down just so happened to be the most creative post of the series to date. I encourage you to go back and read the delightfully hilarious fictitious account of what led the Spurs to achieve one of the greatest three point shooting performances in NBA Finals history during Game 3 of the 2013 Finals. For the life of me, I don’t know what possessed me to write that post. It was a total deviation from everything that I had written prior in the blog series. Perhaps the mere act of choosing a Prince song as the theme of the post and then listening to it a few times in preparation played a role in the spectacular down pouring of creativity that washed over me that night when I sat down at my computer to write. After hearing yesterday’s heartbreaking news, at least I’d like to think so. That’s one of the magical things about the few among us who fall into the category of creative genius. Their creativity is infectious. Without question, Prince infected millions upon millions of people with his creativity for the better part of 40 years and the world is a better place because of the music he showered us with. Tonight, purple rain will continue to pour down from above. Also tonight, a band of black and silver outlaws will enter the FedEx forum in Memphis and attempt to steal a victory like thieves in the temple. Rest in peace, sweet prince.

Featured Image Source: One A Day