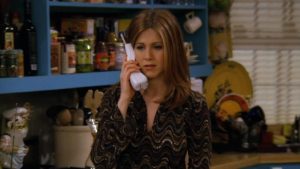 Friends S3:E15 – This really sucks. I won’t lie, I’ve been dreading the moment that is now upon us since the beginning of the year. I mean, situational comedy is meant to be a lighthearted escape from the grind of daily life. It is not supposed to be this heavy, this heartbreaking. Or maybe the fact that it is, in this case, is part of the genius of Friends? I’m hard pressed to think of another sitcom where I have ever been this emotionally invested in the love lives of the main characters. Don’t get me wrong, I love Seinfeld too but I couldn’t be less emotionally invested in who Jerry is dating or breaking up with in any given episode. I never had a visceral reaction to Sam and Dianne’s roller coaster relationship on Cheers or the weekly hijinks governing Lucy and Ricky’s marriage on I Love Lucy. The only example I can give of a comedy that invoked a similar emotional reaction was my investment in Jim and Pam’s relationship on The Office. I consider comparing Friends and The Office, however, as the television equivalent of comparing apples and oranges. The Office, as a single-camera mockumentary is not, in my opinion, a situational comedy in the traditional mold. With multi-camera sitcoms such as Friends, lighthearted escapism is baked into the technical design and, by extension, the way these shows are filmed. A single-camera mockumentary such as The Office, on the other hand, naturally captures a greater sense of realism and therefore has a distinct filmmaking advantage in generating a visceral response. So while my emotional investment in The Office is the closest example I can provide of another sitcom replicating my emotional investment in Friends, I don’t consider the two comparable. So, working under the premise that single-camera mockumentary style sitcoms such as The Office belong in a separate category, perhaps my unrivaled emotional investment in the love lives of Phoebe, Joey, Monica, Chandler and particularly Ross & Rachel contributes to why, in my opinion, Friends is the GOAT sitcom. While it’s all well and good to be mindful that the pain Friends is capable of inflicting is an ingredient in the show’s greatness, it certainly doesn’t make me feel any better about the here and now. Regardless of the fact my emotional investment in the show is unrivaled, watching these episode still really sucks. In fact, sometimes when my wife and I are in the Friends binge-watching vortex we skip ahead over this episode and the next one to “The One Without the Ski Trip” just to avoid reliving the pain and heartbreak. So, if watching these episodes sucks so bad that skipping over them is regular occurrence, imagine how bad writing about these episodes is going to be. This, my friendsters, is why I’ve been dreading this moment since the beginning of the year. And Phase One of this two week torture experiment is occurring on the day before Valentine’s Day? What kind of sick irony is that? Nevertheless, I must suck it up and power through. After all, I suppose it’s challenges like the one in front of me that help justify the lucrative salary that theLeftAhead pays me to work a measly four hours a week. So, without further delay, I believe it wise that we trudge bravely ahead into the emotional abyss that awaits.

First of all…goddamnit, Ross. Really? Chloe, the Xerox girl? Five seconds after you and Rachel just broke up? Excuse me, let me correct the record. Five seconds after you and Rachel decided to take a break? W. T. F. The fact that you, in a moment of vulnerability, made a choice that put your dream come true, magical, fairy tale relationship with Rachel in jeopardy is, of course, heartbreaking. But can we begin by pointing out how infuriatingly out of character it was for you to have done something so reckless and irresponsible to a woman you adored and have proven repeatedly you would break your back trying to make happy? IT DOESN’T MAKE ANY BLOODY SENSE. Why, Ross, why? What were you thinking? And by the way, I’m sure it sucks to have your significant other prioritize work ahead of the relationship on your anniversary but come on, man. You came to her office uninvited with a picnic basket, refused to listen to her tell you she couldn’t take a break, proceeded to ignore her by setting up the picnic anyway, started a fire on her desk, and then you’re the one who’s butt hurt when she doesn’t apologize to you when she gets home? Sorry, bro. That one was on you. This fight was your fault, homie. Not only was the fight your fault, but a complete departure from the Ross that Rachel first fell in love with. That guy would have done anything to support her. Not you. You saw her struggle with her self esteem for two and a half years because she was embarrassed that she was “just a waitress.” Then, she gets the chance of a lifetime to start a career doing something she is proud of and that makes her happy and you can’t just be patient with her for a few months while she is learning how to do the job? Again, completely out of character for a guy who once rushed to put on his dad’s old tux in order to make sure that the girl he adores wouldn’t have to go to the prom alone. To channel my inner-Chandler…could your behavior during this episode be more out of character? So yeah…I don’t know what happened to you, bro. Sorry to be repetitive, but you are not the Ross that Rachel fell in love with. Okay. Taking into consideration the way your marriage to Carol ended, I get the whole Mark-jeaolosy thing. I grant you that shortcoming. It’s understandable that you were a little paranoid that someone else was going to steal the woman you love away again. But this fight? This fight had nothing to do with that (until after the “break”). Nope, this fight began with you operating under the assumption that the Mark-jealosy problem was solved when Mark left Bloomingdales for a better job. So let’s bottom line this thing, shall we, Ross? This fight occurred because you, the guy who once made a mental note to remember to buy Rachel a pin from an antique store (that reminded her of one that her grandmother had had when she was a little girl) and then give it to her on her birthday before she even knew that he had a crush on her, decided that it was more important to put your own needs on your anniversary ahead of hers. IT DOESN’T MAKE ANY BLOODY SENSE. And how do you solve a fight that you started and was your fault? Goddammit, Ross. Really? Chloe, the Xerox girl? And that kiss? That awful, painful, horrible, relationship destroying kiss. Hell, that kiss was so gut-wrenchingly horrifying that it’s practically destroyed U2’s With or Without You for me as well. Oh, I know. You tried to call Rachel and work things out but you heard Mark’s voice in the background. Boo hoo. Woe is me, let me stick my tongue down another woman’s throat five seconds after Rachel and I break up because she’s clearly back at her place having sex with Mark. W.T.F. Really? Do you really not have any trust that Rachel wouldn’t do that to you? I’m disgusted by you, Ross. I don’t think I can even speak to you anymore tonight. My hope is that after we call it for the night (to take a break, so to speak), you will go home and take some time to think about how that selfish, spiteful, reckless kiss has put you on the precipice of destroying the best thing that ever happened to you. But you’re not going to do that, are you Ross? You’re going to continue your self-righteous pity party all the way through the night. You’re going to go home and have sex with Chloe, aren’t you, you son of a bitch? Damn, Ross. You’re pathetic. Rachel deserves so much better. Go have your revenge sex, loser. Hope it’s worth it. By the way, I’m not finished with you yet. I’m just too disgusted to continue this right now. We’ll pick this back up next week. Peace, bro.

Recap in the Key of Phoebe – This is the one where Ross and Rachel have a huge fight after Ross shows up univited at Rachel’s office with a picnic and starts a fire on their anniversary, Phoebe dates a foreign diplomat who doesn’t speak any English, Monica gets a rapport going with Phoebe’s diplomat’s translator, Joey and Chandler scheme to have a threesome with Chloe (the “hot girl with the belly button ring” from the Xerox place), and Ross ends up being the one to hook up with Chloe after he and Rachel agree that the best resolution to their fight is to take a break.

Chan Man Quip of the Week – [The Setup] Chandler and Joey are at Central Perk killing time before the party that Chloe invited them to meet her at. They are both preoccupied by the fact that Chloe had floated the idea of a threesome while inviting them to hang out and decide to cautiously broach the subject in order to figure out what they would do. Joey offers, “God, that would be weird if that situation presented itself tonight, huh?” Chandler responds, “Yeah. Yeah, I mean what, what would we do?” Perplexed, Joey admits, “Dude, I don’t know.” Hoping to avoid further awkwardness, Chandler offers the reassurance that “She was kidding.” Joey agrees, “Yeah.” Unable to convince himself, Chandler continues, “She was. But ya know what? Just in case, maybe we should come up with a set of ground rules.” Playing along, Joey says, “Yeah, for sure. Okay. Probably want the first thing to be, never open your eyes. Ya know, because you don’t want to be doing something and then look up and see something you don’t want to be seeing.” At first, Chandler sees the sense in Joey’s logic and agrees, “Yeah. Good call, nice one.” Almost immediately, however, a lightbulb goes off in his head and he continues, “Hold it!! Hold it! What if me eyes are closed, and, and my hand is out there…” Seeing the way Chandler is motioning with his hand, Joey quickly changes his mind, “Ah!! Okay! Eyes open at all times!” He then continues by asking, “Oh, hey, how do we decide where we…ya know…each would…ya know…be?” Following along, Chandler replies, “Right. Right. Well ah…ya know…we could flip for it.” Playing along, Joey responds, “Yeah, I guess, but what’s like heads and what’s tails? [The Knockout] Looking visibly horrified, Chandler fires back, “Well it you don’t know that, then I don’t want to do this with you.”

Subscribe to this author's posts feed via RSS
In category: Friends 20/20, Pop Culture
Tags:Friends , U2