We Were on a Break 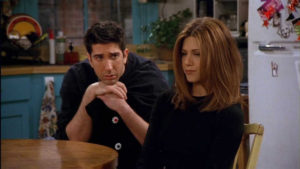 Friends S3:E16 – Okay, here we go. Yes, boys and girls, the second part of our torturous journey through Friends emotional hell is somehow already upon us. Has it really already been a week? Time flies, I guess, when you’re dreading having to write a gut wrenching blog post. Since we have no choice but to dive right back into the belly of the beast, I will spare you any lollygagging around with these opening comments. Let’s go ahead and forget about the exchanging of pleasantries this week. My objective is to clock in, get the job done as efficiently as possible, and then clock out. I think we can all agree that getting to the other side of Ross and Rachel’s break up is the only thing that is important at the moment. We can save the pomp and circumstance for another time. Are there any objections to this course of action? Hearing none, lets keep it moving. When last we left our buddies, Ross was on the brink. He was making out with Chloe at the club. Thinking back to the when this sequence first aired 20 years ago, I remember hoping against hope during the intervening week that we would return to find Ross had come to his senses, pushed Chloe away after just the one kiss, and then run home to patch things up with Rachel. (Can you imagine how different the remaining years of the series would have been if he had just done that?). But, of course, we all know that in fact Ross doesn’t come to his senses. Unfortunately, we return to find Ross waking up at home with Chloe hopping out of the shower in his bathroom. SPLAT (the emotional equivalent of getting hit by a Mack Truck). Just thinking about it gives me the creeps. You too? Okay, well, considering the pain we’re all experiencing as we relive the death of Ross and Rachel’s relationship, I think the most appropriate thing we can do is simply dive right back into a conversation which I promised we would return to today: the undressing I was frustratingly delivering to Ross last week. While, much like Monica and Phoebe ripping off Waxine strips, revisiting this conversation is surely going to be painful but the one silver lining is that we’re off next week and, therefore, we’ll all get an extended amount of time to recover from this emotional tornado. So, knowing that we’ve been generously gifted a fortnight to heal, let’s rip the Waxine strips right off, shall we? Godspeed, Friendsters. Brace for impact in three, two, one…

Okay, Ross…let’s resume. I told you I wasn’t finished with you. Whelp, you did it, didn’t you, you disgusting, weak pathetic excuse for a Geller. If anyone in the history of Chicken Pox ever deserved to get a weenie pock, you better believe that it’s you, Ross. I can’t believe you slept with Chloe, bro. How could you do this to Rachel? I know, I know. You’re going to say, “I only did it because I thought at the same exact moment she was sleeping with Mark.” Grow up, man. I know that experiencing Carol cheat on you was a traumatic, paranoia-inducing ordeal but take a moment and try to regain your grip on reality. Rachel is the type of girlfriend that goes out of her way to dress up as Princess Leia in the Gold Bikini because it is important to her to help you enjoy your sexual fantasies. Does that sound like the type of gesture that’s made by a girlfriend who’s going to cheat on you first chance she gets? Of course not. There is not even a remote possibility. (Sorry to channel Smokey from Friday but…). “And you know this…man!” You know Rachel is considerate, and kind, and decent-hearted. Deep down, you knew she would never do that to you. But you, my friend, did do it to her…didn’t you, you helmet-headed, “there’s no way you could have really earned your Ph.D by age 26” sorry excuse for a paleontologist. You’re so freaking pathetic. And then, what is the first thing you do after you realize you’ve made such a God awful mistake? You take Chandler and Joey’s advice and try to cover it up? Haven’t you learned by now that Channie and the J-Man are about the last people you want to take relationship advice from? But, sure enough, there you were running all over New York trying to convince casual acquaintances (and Gunther) to keep a secret from the one person you’re supposed to be the most honest with. Issac was right when he said, “We’re the same, you and me.” You insist that you aren’t the same but deep down you know the cold, hard truth, don’t you Ross? “Search your feelings, you know it to be true.” You and Isaac are the same, you feeble-minded, self-serving scrud. You and Issac are two peas in a pod. The fact that you would even attempt to go to such lengths to cover up the affair confirms that you’re about as dirty a dog as they come, Ross Geller. Don’t you know anything about history, scholar? The cover up never works and always makes the crime worse. Wow, you must really lack respect for Rachel to be willing to degrade her with such a Nixonian stunt. And to top things off, after your cover up attempt (of course) fails and Rachel finds out from Gunther, you have the audacity to think that you can just plead your way out of it? You’re like a Trump apologists nonchalantly downplaying his Russia scandal. I DON’T THINK YOU REALIZE HOW SERIOUS THIS IS. Rachel is right, too. If the shoe had been on the other foot and it had been her who had slept with Mark, you (in all your petty glory) would have been shouting from the rooftops how unforgivable it is. Don’t try to deny it, Ross. Stop insulting our intelligence, you Republican-level hypocrite. If Rachel had cheated on you with Mark, you would have made yourself out to be the biggest victim of highway robbery since the Atlanta Falcons had the Super Bowl stolen from them by the New England Patriots. (Too soon?) That’s right, Ross. If the situation had been reveresed, you would have deemed Rachel’s transgression unforgivable. Yet, because it’s you who’s the cheater and she the victim, you find it reasonable that you should be able to talk your way out of it in one conversation? Unbelievable. God, Ross, I just can’t understand this. You cheated on Rachel? IT DOESN’T MAKE ANY BLODDY SENSE. That’s it. I’m done. (Throwing up my hands.) I’m not even mad anymore. I’m just sad. You were supposed to be one of the good guys but you’ve showed us your true colors, homie. Sadly, you’re not one of the good guys. Not even close. Unfortunately, the sad reality is that you’re one of the worst, Ross Geller. Enjoy the avalanche of failed marriages and divorces you’ve got coming your way, bro. You better hope that Rachel has the capacity to be the bigger person and forgive you someday even though you don’t deserve it. Redemption through her grace. That’s your best hope. As disgusted as I am by you, if and when Rachel does find the grace to forgive you, I’ll try to as well. Until then, you’ve got to go. Don’t give me that look. You’re not getting any sympathy from me today. Not even one drop. Ken Adams doesn’t roll with your type of indecency. See you later, traitor. By the way, one last thing. And I think I speak for the entire Friends 20/20 community when I say…(sound of me shutting the door in Ross’ face).

Recap in the Key of Phoebe – This is the one where Ross sleeps with Chloe and then tries to cover it up so Rachel doesn’t find out after Chandler and Joey convince him not to tell her, Monica and Phoebe get super excited to become Waxine girls, and Rachel ends her relationship with Ross after The Rossatron is unable to track “the trail” all the way down before Gunther tells Rachel about what Ross did while (as she so heartbreakingly puts it) “we were on a break.”

Chan Man Quip of the Week – [The Setup]. Monica, Phoebe, Joey and Chandler are holed up in Monica’s bedroom because Ross and Rachel are out in the living room breaking up. While the guys originally came in Monica’s room because Monica and Phoebe were screaming in pain from using Waxine, the group nevertheless has been listening in on Ross and Rachel ever since they first stormed into the apartment. Eventually, Joey and Chandler get anxious to get back to their own apartment. Joey informs the girls, “You know what, I don’t think we should listen to this anymore.” As Joey goes to open the door, Monica protests, “What, what are you doing? You can’t go out there.” Joey complains, “Why not? I’m hungry.” Giving the obvious answer, Monica responds, “Because they’ll know we’ve been listening.” The cameras cut to the living room where Rachel is excoriating Ross, “God! And to have to hear about it from Gunther!” Ross pleads in response, “Come on! Like I wanted him to tell you. I ran all over the place trying to make sure that didn’t happen!” Rachel sarcastically counters with, “Oh, that is so sweet. I think I’m falling in love with you all over again.” The cameras then cut back to Monica’s bedroom where Chandler is backing up Joey by suggesting, “You know what, I think we can go out there. I mean they have more important things to worry about.” Agreeing Joey adds, “Yeah, we’ll be fine.” The cameras quickly cut back to the living room where Ross is revealing, “Look Rachel, I wanted to tell you, I thought I should, I did, and then Chandler and Joey convinced me not to.” [The Knockout] The cameras cut back to Monica’s bedroom where Chandler is handing Monica the can of wax and instructing, “Wax the door shut, we’re never leaving, ever.”