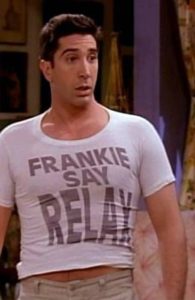 Friends S3:E19 – Oh mommy, oh daddy, I am a big old baddie! Oh mommy, oh daddy, I am a big old baddie!. Nation of Friends: What. Is. Up? Happy Monday! And what a Monday it is. The Affordable Care Act aka Obamacare is still the law of the land, I finally got to watch Rogue One (excellent) over the weekend after having had the misfortune of squandering multiple chances to see it in theaters, and we have not one, not two…but pretty much three schools who’ve earned their first Final Four birth (Oregon, Gonzaga, and South Carolina) and will get a crack at immortality next weekend alongside perennial contender and last year’s tortured runner up, North Carolina. I was ecstatic to see such a bracket-busting weekend (especially since my own bracket went bust in the Round of 32 when Villanova (my pick to repeat as champs) dropped a nail-biter to Wisconsin. Now that everybody’s bracket is busted (kind of like the GOP’s #Trumpcare bill), we’re all free to sit back, RELAX (title plug), and choose our favorite Cinderella story to root for next weekend. Even if you’re rooting for North Carolina, (it isn’t exactly Cinderella) but it certainly would be a feel-good story to see them secure redemption for last year’s heartbreaking, buzzer-beating defeat in the title game. But I digress. Suffice it to say, I’m in a pretty good mood today coming off of a spectacular weekend. In fact, I’m in one of those I don’t really want to start the work week, I just want to watch old YouTube videos kind of Monday morning moods. My suspicion is that your are too. Am I right? Or am I right? Or am I right?. I mean, I know Mr. James (the Big Boss) gets mad when I mail in this column, but…come on. It’s spring so chances are the weather is nice wherever you are, we all had a fabulous weekend, and (to top it all off) the name of today’s post is RELAX. Me mailing in a post called “Relax” so I can spend my Monday relaxing is just art imitating life imitating art. (??? Whoa, I know I blew your minds in the last post two weeks ago but I might have just accidentally done it to myself.) So, trust me. By mailing in this post, I’m doing Mr. James a favor, I’m doing me a favor, and most importantly…I’m doing you (the reader) a favor. By setting a relaxing tone for the week by half-assing this submission, Mr. James will have more time to edit other content for the blog, I’ll have more time to watch old YouTube videos (like the aprapos Frankie Goes to Hollywood video that I’m embedding for your enjoyment below), and you will have more free time to do with what you please. Perhaps it will free you up go to a movie this week? As Gunther’s lover.. Or maybe you could use the extra time to just go get something to eat. As Gunther’s lover.. Hey, whatever you choose to do (as Gunther’s lover) is cool with me as long as you remember, “Kenny says relax.” Enjoy the week and stay thirsty, my friends. Also, keep an eye out for the rhythm. Be sure not to let it get you. Chickity-check you next week.

Recap in the Key of Phoebe – This is the one where Ross goes mental when Rachel gives him s box of his stuff back, Monica dates Pete (her millionaire customer) even though she’s not physically attracted to him, Joey develops a love-hate relationship with Kate (his co-star in the play he landed), Rachel begrudgingly agrees to go on a date with Mark, Chandler talks Ross down off a ledge after Ross unfortunately finds out about Rachel dating Mark, Phoebe lobbies on behalf of creating a new superhero named Gold Man, and Ross (in the end) takes his t-shirt’s advice by returning it to Rachel and in so doing…finding it within himself to relax.

Chan Man Quip of the Week – [The Setup] Monica, Phoebe, Ross and Chandler are at Monica and Rachel’s apartment discussing Monica’s date with Pete. All of a sudden, Joey bursts into the apartment dancing around and singing, “Oh mommy, oh daddy, I am a big old baddie! Oh mommy, oh daddy, I am a big old baddie!” Just as quickly as he burst in and without saying another word other than his song and dance, Joey dashes back out of the apartment. Everyone looks at each other bewildered before Ross speculates, “I guess he musta gotten the part in that play.” Monica and Phoebe nod and say “oh” to indicate that Ross has provided a reasonable explanation for Joey’s erratic behavior. [The Knockout] Unconvinced that there isn’t a funnier explanation for Joey’s song and dance, Chandler counters, “Yeah, either that, or Gloria Estefan was right. Eventually, the rhythm is going to get you.”