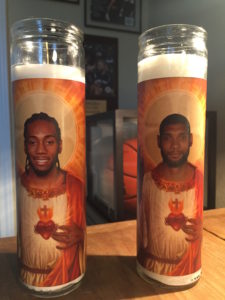 City of the Year – That was freaking insane. (No, I’m not talking about President Trump firing F.B.I. Director James Comey on Tuesday. While that was the desperate attempt of an unstable leader to cover up the high crimes and misdemeanors that could prove his illegitimacy and was unquestionably insane, luckily for the former reality show star who currently occupies the White House, this is a basketball blog series so, for our purposes, a reference to 45 most likely refers to Michael Jordan’s post-retirment bad luck jersey number.) Of course, the insanity that I’m referring to is the madness that took place at the AT&T Center down in San Antonio on Tuesday evening or what will henceforth always be known simply as Game 5. Where to begin? I guess the obvious. Reaching deep down for my inner-Charles Barkley, “GINBOILI!” 36 hours later, I can’t get enough. I’ve been replaying the block over and over again in my mind. The basketball IQ required to be able to anticipate from behind the play (after getting beat) the exact place where James Harden is going to shoot the ball, jump before he goes into the shot, and meet him in the air at the perfect time to block it clean as a whistle is through the stratosphere. No other basketball player that I’ve seen it my life could/can tap into the combination of intangibles it takes to make that play. None. What a special, special player. (Hey Brian, I know you were smiling down on your favorite player for that one.) I mean, come on. Not only the anticipation, but the utter fearlessness to even go for it. Keep in mind, with Manu, these types of things don’t always work out. More than any other player in the history of the NBA, his game exemplifies the saying, “live by the sword, die by the sword.” Remember, Manu cost us a series (and probably a title) when he fouled Dirk Nowitzki going for an irrational block. That foul allowed the Dallas Mavericks to tie Game 7 of the 2006 Western Conference Semifinals and send the game into overtime (where they outlasted us en route to the NBA Finals). Manu’s block attempt on Tuesday night carried with it the same inherent risk. If he had come up with arm on that attempt, James Harden would have been at the line shooting three free throws and would have likely sent the game into double overtime. But alas, the combination of Manu’s unequaled anticipation and fearlessness paid off on Tuesday and this time, the #BlackAndSilver lived by the sword. We lived by the sword in a big way…

Oh, by the way…reminiscent of Game 5 of the 2014 NBA Finals, Manu also had a huge dunk in the second quarter of this game to help the San Antonio Spurs hang on in overtime to defeat the Houston Rockets 110-107 in Tuesday’s pivotal Game 5 and take a 3-2 lead in the best-of-seven Western Conference Semifinals. While Manu’s Game 5 heroics were deservedly headline grabbing, the player of the game was Danny Green. With Kawhi Leonard sidelined with knee and ankle injuries, Danny single-handedly outscored the Rockets in overtime 7-6 hitting the two biggest shots of the series so far, a deep clutch three and a driving layup plus the foul (both times after the Rockets had threes of their own to take the lead). Danny finished the game with 16 points (4-8 behind the arc), five rebounds, three assists, and one legendary playoff performance now added to be counted among the upper-echelon of legendary Spurs playoff performances. I’ll be honest, with Kawhi sidelined and LaMarcus Aldridge once again out of sorts, things weren’t looking good three minutes into the overtime period. The Spurs were scoreless and seemed dead in the water after Patrick Beverley dropped a three pointer to give the Rockets the lead. Luckily, Jonathan Simmons got himself the free throw line with 1:28 left to close the gap to one point and that was enough “juice” to give the Spurs a spark so that Danny Green cold take over and bring us home. I could spend several hours writing a detailed recap of this game but unfortunately there simply isn’t any time. Due to work and travel commitments, I’ve had precious little time over the past 36 hours to get anything down on paper and have instead been relegated simply to basking in the glory of this historic win by replaying Manu’s block and Danny’s clutch shots in my mind. As of the completion of this post, it is still unknown whether Coach Pop will allow Kawhi to play tonight. If it’s meant to be and Kawhi takes to court at the Toyota Center in Houston, I have full confidence that he will continue accepting the passing of the torch from Tim Duncan that we talked about in Tres Triunfos by channeling TD circa 2003 with another franchise cornerstone performance to close out another hard-fought playoff series on the road in six. If, for some reason, it’s not meant to be and Kawhi can’t go…well, his teammates proved in overtime on Tuesday that we can still get this thing done as a team. It’s easy to say “next man up” but in order to execute it to the degree that the Spurs have so far in this series, losing Tony Parker and now possibly Kawhi, it takes something more than words. It takes something that doesn’t come simply from the players, or the coaches, or the franchise. It takes something that comes from the entire city. The type of thing that allows a city to keep believing even when your two best players are sidelined with injury and you’ve gone three and a half minutes into an overtime period without scoring a single point. You know, a certain little something that earns said community the title, City of the Year. In order to have overcome all of the adversity we’ve faced during this playoff series and put ourselves in a position to close out our in-state rival tonight, it has taken all of us believing whole-heartedly in what we can accomplish together. Tonight, the city of San Antonio’s greatest weapon to accomplish the goal of closing out the Rockets is our faith.