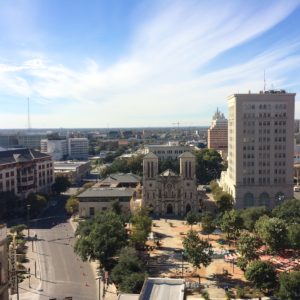 All We Got – Condolences to Patrick Beverley and his family. The Rockets shooting guard found out about the passing of his grandfather an hour before the tip of Game 4. He proceeded to hit the first shot of the game, a three from the elbow, and set the tone for the entire night. In a game that was eerily similar to Game 1 in San Antonio, the Houston Rockets defeated the Spurs 125-104 in Game 4 at the Toyota Center last night and tied the Western Conference Finals at two games apiece. First, the good. The player of the game was Jonathon Simmons who’s performance was the only bright spot in an otherwise abysmal showing. The Juice had 17 points (6-12 shooting), four rebounds, and two steals last night in 23 minutes. He was also the only Spur to play more than 20 minutes and also have a positive plus/minus rating (+2). The Rockets are a good matchup for Simmons and (in the absence of Tony Parker) he should be entrusted with more minutes this week as we try to closeout out this toughly contested series. Now the bad. The Spurs committed 14 turnovers, missed nine free throws (9-18 overall), and gave up 19 three pointers to the Rockets (44.2 percent on 43 attempts). All of these shortcomings are unacceptable for any team interested in winning an NBA playoff game on the road. Of particular concern to Gregg Popovich was our transition defense. In fact, in his postgame press conference, Coach Pop observed, “If you had seen clips of our transition D, you would have traded all the players and fired my by the end of the game. It was that bad.” I think Pop has earned a little more job security than that but, at the same time, there’s no sugar coating this one: it was a very disappointing performance. Back in the same situation as last year’s Semifinal series in Game 4, the Spurs once again failed to find the killer instinct to be greedy, step on the Rockets’ collective throats, and put a stranglehold on the series. We must now regroup because, luckily, we still have another game available to us to use as an opportunity to correct the mistakes of last year’s series against Oklahoma City. Redemption for last year’s collapse can still be ours if we come ready to protect home court on Tuesday night in a now must-win Game 5 (something we failed to do last year). The war for Texas has now become a best-of-three series but, with home court advantage and championship pedigree, I still love our chances to cash in. Tomorrow night, the game is Texas Roulette and as the saying goes, always bet on #BlackAndSilver because when we get knocked down in the city of San Antonio…we’re always there to pick each other right back up.

“We view ourselves on the eve of battle. We are nerved for the contest, and must conquer or perish. It is vain to look for present aid: none is at hand. We must now act or abandon all hope!” – Sam Houston

City of the Year

War for Texas tied.
Keep the faith. Where are we from?
City of the year.