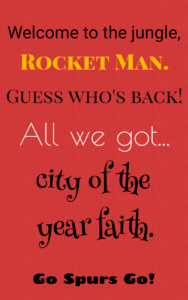 Faith – The “experts” were utterly dumbfounded. But why wouldn’t they have been? In their minds, what they had witnessed was impossible. After they found out that Kawhi Leonard had been scratched prior to Thursday’s matchup, the consensus among their ranks was that the Rockets would certainly force a Game 7. I mean, it was as close to a sure thing as comes around in the business of sports prognostication. Nevermind the fact that Mike D’Antoni was 5-19 against Gregg Popovich head-to-head in the playoffs and had never forced a Game 7 in any of the four previous match-ups (much less beaten him). It takes research to be able to factor things of this such into one’s predictions. And what more should an “expert” be expected to do in order to form an opinion other than read the Vegas lines and do a side-by-side comparison of star power? Research? Come on, let’s be civilized. After all, research takes time away from preparing to look good in front of the television cameras. Makeup, beard and neck trims, manicures…there is a lot of dressing room time that goes into becoming an “expert.” Anyone willing to risk not looking good in front of the television camera because they sacrificed that time to do research wouldn’t hack it in this field so we needn’t overcomplicate things. Vegas has the Spurs in Game 6 as 8.5 point dogs, the second-largest underdog they’ve ever been in the 268 playoff games that Gregg Popovich has coached the team, so of course Houston is going to win and there is going to be a Game 7. Duh, it’s plain as day. Kawhi Leonard is out, Tony Parker is out for the year, and Tim Duncan is probably somewhere down in South America on a motorcycle enjoying retirement. Clearly the Spurs don’t have the star-power to matchup with the presumptive NBA MVP, James Harden – an MVP who, along with Russell Westbrook, is so brilliant on offense it’s given the “experts” carte blanche to spend an entire season ignoring what Kawhi (and LeBron James, for that matter) bring to the table on both sides of the basketball. Throw in the fact that Houston is at home against the overmatched Spurs junior varsity team and there is no way this could turn out any other way than a Rockets victory. By the way, since all of the Houston in 6 picks that the “experts” made went out the window after San Antonio’s miraculous Game 5 victory there is much face-saving to be gained by the Rockets extending the series. So there’s got to at least be a Game 7, right? I mean, the “experts’ could still look pretty smart if the Rockets pulled this series out in 7. What’s one little game? Kawhi Leonard going down was just the gift the experts needed to avoid embarrassment. Surely now they wouldn’t have to eat the crow of The Bearded One and the architect of Seven Seconds or Less crashing and burning in 6. All of the chips are stacked against the Spurs. Pop figuring out a way to win under these circumstances at the Toyota Center would obviously make the “experts” look foolish. He’s the best coach in the league but even he’s not that good. It’s hopeless, impossible, never going to happen. Right? ?

On Thursday night in Houston, Gregg Popovich danced all over the arrogant windbag presumptions of basketball pundits everywhere and utterly obliterated conventional wisdom by coaching up his undermanned Spurs team to a 114-75, 39 point beat down of the Rockets to eliminate our in-state rival on their own home court. It was a masterful performance that perplexed the opinion-makers whose job it is to inform the greater basketball-viewing public of what is supposed to happen. I won’t lie, I enjoyed watching postgame analysis on multiple outlets that featured “experts” who were literally gawking with their mouths open trying to find an explanation for what they had just witnessed. The obvious thing to point to (so obvious, even the most-pretigious of “experts” could identify it) is the performance of player of the game LaMarcus Aldridge. Playing as the first option, LA had a masterful performance. He pumped in 34 points (16-26 shooting) and 12 rebounds and went a long way towards silencing his rapidly-growing chorus of critics (which unfortunately included many a Spurs fan). As an aside, for those Spurs fans who had planted a flag in the LaMarcus-bashing camp at some point during these playoffs…it’s too bad that you don’t get too fully bask in the glory of his performance in this victory because, as a diehard fan who has stuck with LA through both his good times and bad ones as a member of the #BlackAndSilver, I can gladly report that it felt amazing to be able to whole-heartedly celebrate with him when he came through in the biggest way during the most critical game of his tenure here in San Antonio. LaMarcus Aldridge was, is, and will always be a bad ass. I mean, seriously. He’s the only player in Spurs history whose number was retired prior to him even suiting up for the team. Moving on, the not so obvious thing to point to for why the Spurs destroyed the Rockets on Thursday night, cuts right to the heart of why the “experts” got this thing so wrong. Yes, to be sure, Pop is a brilliant in-gmae strategist. The thing, however, that separates him from every other coach in the league is the way he develops players year after year, day after day, minute after minute. The reason the Spurs did something on Thursday night that the “experts” thought was impossible (eliminate a quality opponent on the road by 39 without our two best players) is because while everyone else is deciding what’s impossible, Coach Pop is developing the possible. Pop knew that Jonathon Simmons was capable of stepping in for Kawhi Leonard and contributing to winning basketball because he’s given him the opportunities over the past nine months to develop into a player that’s capable of stepping in for an MVP candidate and contributing to winning basketball. If you’d watched every Spurs game this season (something clearly beneath the “experts”) you’d have known it too because Pop has been showing his cards all year. Simmons, Kyle Anderson, Dejounte Murray, Davis Bertans, even Bryn Forbes. They’re all ready to step into any situation and contribute to winning basketball because Pop has given them the opportunities to develop. There is no misdirection or slight of hand involved in what Pop has done here. It’s been obvious to any and everyone who’s watched the 2016-17 Spurs religiously and why Thursday’s 39 point demolition of the Rockets was a pleasant surprise but not a shock to diehard Spurs fans. Now the “experts” are giving us next to no chance to beat our Western Conference Finals opponent, the Golden State Warriors. The Warriors are an amazingly-talented team and present a monumental challenge for us in the next round. I intend to devote a great deal of time talking about them over the next two weeks, but they are irrelevant to what I want to say today. The Spurs have faced tremendous adversity so far this postseason and we have persevered. Over the past month, every time that Coach Pop and the #BlackAndSilver have been met with a challenge, we have answered the bell. Finding ways to tap into the character-building desire it takes to still be standing when facing this degree of adversity makes us a serious threat to win this year’s title no matter who our competition is and no matter what the “experts” think. In the last game, Vegas had us as 8.5 point dogs and the “experts” said it was an impossible game for us to win. We won by 39. For Game 1 of the Western Conference Finals this afternoon at Oracle Arena in Oakland, Vegas has us as 10.5 point underdogs and the “experts” are giving us no chance to win the series. I guess we have the “experts” right where we want them. They’ll keep prognosticating against us and we’ll keep proving them wrong. In San Antonio…the more things change, the more they stay the same. Bring on the next challenge and the latest tsunami of doubters. We’ll just keep pounding the rock, until the end of time.