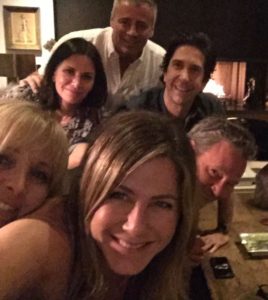 Friends S6:E5 – What’s good, Friendsters? Since this is our last convening in the month of October, let me start off by saying, Happy Halloween ????? Does everyone already know what they’re dressing up as next Thursday? I sure do. I’m going to dress up as my boss, Ted James. My costume will be a ghost because that’s exactly what theLeftAhead editor-in-chief has been this fall while he’s allegedly been on sabbatical recording music. I’ve gotta say, it’s been pretty spooky around here without the boss man constantly hovering over my desk reminding me of my deadlines. On second thought, what am I even doing here at the office? I can write and post my column from home and it’s not like there’s anyone here monitoring my attendance. In fact, maybe I’ll go home to finish today’s post and maybe I’ll work from home the rest of the month. Or maybe I’ll just stop typing. Or maybe I’ll just stop typing “stop typing,” shift into MAIL IN SPECIAL mode, finish this post here at the office, and then take the rest of October off. But I digress. Wait, what were we even talking about? Oh yeah, Halloween. I bet I know what Joey Tribbiani is going as for Halloween. What could that be? A guy who own a Porsche, of course. I mean, he’s got to wear all of that Porsche gear that’s collecting dust in his closet at some point, right?

Any who, so what else is going on? Well, I’m glad you asked. Did you hear that Jennifer Aniston broke the internet when she joined Instagram on Tuesday and posted this FRIENDS reunion photo. Jennifer (or Jen as her IG profile suggests her friends call her and being one, what I call her ?) set a Guinness world record for fastest to reach a million followers (five hours and sixteen minutes) with her thunderous entrance into the social media sphere. While there’s no question that Jen joining IG was a calculated, a savvy PR move designed to promote her upcoming Apple TV+ television series, The Morning Show, you would be hard pressed to find anyone who could be mad at the move, especially since she launched her account with such a fun, nostalgic selfie of her and her FRIENDS castmates. Alrighty then, since I’ve dutifully brought you up to speed on who owns Instagram this week, I think I’ve done my due diligence on putting together a M.I.S. So like Ted James (or my Halloween costume), it’s time for me to wrap this up and ghost theLeftAhead office. That’s right, y’all. Pretend this blog post is a game of Trick or Treat and it’s my turn and I chose Trick and now I’m going to disappear. Happy Halloween. Boo.

Recap in the Key of Phoebe – This is the one where Ross deals with the blow back of Rachel finding out that they’re still married, Joey finds the keys to a Porsche at Central Perk and then pretends to be the Porsche’s owner when he starts receiving attention from the ladies for hanging around the car, Phoebe recruits Monica and Chandler to help her babysit Frank and Alice’s triplets, Chandler goes to the hospital after accidentally swallowing the sonic blaster gun of Krog (a non-age-appropriate toy) while babysitting the triplets, Monica fights off the temptation to freak out about the mess Phoebe made in her apartment while getting triple-teamed by the babies, Rachel tells the judge that Ross is gay, drug addicted, and incapable of consummating their marriage during their annulment hearing, and Ross loses in the very same annulment hearing when the stenographer won’t stop typing, “stop typing.”

Chan Man Quip of the Week – [The Setup] Phoebe, Monica, and Chandler are at Monica’s and soon-to-be Chandler’s apartment. Phoebe and Monica are watching the triplets and Chandler is making throat noises from the sonic blaster gun swallowing incident. Joey walks in decked out from head to toe in Porsche gear. Without saying hello, Joey informs his pals, “So the Porsche guy took his car back.” Immediately perplexed by Joey’s outfit, Chandler sarcastically asks, “But you found the keys to his clothes?” Joey answer, “No. No, I just uh, I just loved the way it feels when everybody thinks I own a Porsche.” A little hesitant to wade too deeply into the inner workings of Joey’s twisted logic but as the same time, understandably curios, Monica reluctantly probes, “And people will think you own a Porsche because you’re wearing the clothes?” Happy to explain himself, Joey responds, “Of course! Only an idiot would wear this stuff if you didn’t have the car! Right?” [The Knockout] With all the swiftness and precision of the black belt quip artists that he is, Chandler delivers a blow that simultaneously strikes Joey directly in his heart whilst also cruising magnificently right over his head by agreeing, “That is true.”
​
#TheChickAndTheDuck