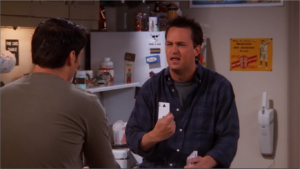 Friends S6:E6 – Well hello again, Blog Friendly Gentlepeople! Hope you all had a fantastic Halloween and that your November is off to a lovely start. In the event that that’s not your truth and because it’s not your truth you can use a fun and exciting distraction from Everyday Life (yes, the rumors are true…Coldplay is dropping a new album with this name on November 22nd and we here at theLeftAhead CAN NOT WAIT!!!), I’ve got a special surprise in store for you today, class. Many of you were wondering as you walked in and took your seats why there is one of those televisions bolted to a wheel cart that you remember getting excited about in grade school (because it meant the teacher was going to show a movie instead of teach) at the front of the class. Well, I know the suspense is killing you so I’ll just spit it out. I’ve brought the television bolted to a wheel cart into class today so that we can watch the big game together! “What big game could be happening on a Monday morning at the beginning of November?” you may be wondering. Duh. We’re about to watch the Big Game, Italy vs. China, apparently. So grab some nachos from the side table (thanks for brining in nachos, Sally) and let’s get this party started!

While we’re watching the game and eating our nachos, we should also discuss today’s episode. You might’ve expected that me bringing in a television to watch Italy vs. China was a clever ploy to exercise a MAIL IN SPECIAL on today’s episode but if that is what you expected, you could not be more wrong. I mean, what kind of blogger do you take me for? I take my work seriously which all of you know means that I would only exercise a M.I.S. when, dictated by emergency, it is absolutely necessary. Okay, okay, who am I kidding? Obviously, I would love to mail in today’s post and would have no qualms doing it. The thing is that I received another Robert De Niro Meet the Parents “I’m watching you” text from my “on sabbatical” boss Ted James at like 5:00 am this morning. This being the unfortunate case (and because he informed me that his sabbatical is ending in a couple of weeks), I think for the sake of my continued employment here at theLeftAhead, exercising another M.I.S (which would be the third in six episode this season) is not a wise move. Like a seasoned pro facing an opponent playing Cups for the very first time, my only move here is to play it safe and work for the D-Cup with a sitting down bonus, if you will. So, as we’ve just witnessed Italy take the early lead on China in this epic rivalry, let’s discuss another epic rivalry: Monica vs. Rachel.

In today’s episode, Phoebe gets annoyed with Monica and Rachel for being sad about The End of an Era while there packing Rachel’s stuff to move out and decides (using very Phoebesque logic) that the way to get them to stop being sad about no longer living together is to have them remind each other of things that they’re not going to miss about living together. Thus, the epic Monica vs. Rachel Feud of 1999 is born. And it proves to be one of the greatest Monica vs. Rachel fights in FRIENDS series history. Monica and Rachel hit each other with some sick burns as they fight over Rachel moving out. For example, Rachel claps on Monica for not getting phone calls from interesting people. Monica claps on Rachel for wearing her sweater too tight. Rachel claps on Monica for stretching out her shoes (when she borrows them) with her big clown feet. Monica claps on Rachel for loving Ross, then hating Ross, then loving Ross, then hating Ross. The sickest burn of all (and therefore the W in the Monica vs. Rachel feud of 1999) goes to Rachel. When Monica says, “Well, this is the last box of your clothes. I’m just gonna label it, “What were you thinking?” Rachel claps back with, “Funny, because I was just gonna go across the hall and write that on Chandler.” OH!!!!!!!!!!!! Look at the underdog Rachel with the come-from-behind walk-off grand slam! Incredible!

Oh snap, is this life imitating art because look class, the underdog China just rallied from behind to defeat the heavily-favored Italy! Well, I guess that means that class is over. First, because the game is over and second because at this point, there is no way that Ted James can argue that this week’s post is a MAIL IN SPECIAL. Class dismissed! Please clean up your nacho plates before you leave (I ain’t your daddy). Yes, that means you Johnny. I see you trying to sneak out. Congratulations, Rachel. Congratulations, China. And congratulations Ross for being so good at Cups, you walked away with the $1500 dollars Chandler was trying to dump to Joey. Class homework assignment: Ross Geller. Underrated, overrated, or properly rated? That discussion and more next week on The Price is Friends. See you later, alligators.

Recap in the Key of Phoebe – This is the one where Chandler convinces Joey to gamble with him on their last night as roommates so that he can purposely lose the $1500 he wanted to give to Joey to help him cover his bills but Joey wouldn’t accept as charity, Joey kicks and breaks the foosball table when he accidentally scores on his own goal against Chandler during one of the bets that Chandler is trying to purposely lose to him, Rachel gives Monica the last-night-as-roommates gift of allowing Monica to help her pack, Monica gets so excited that she demands that everyone should help Rachel pack, Ross makes a fake Ben as an excuse to watch the Knicks season opener at home instead of helping Rachel pack, Phoebe meddles in Monica and Rachel’s sadness over not being roommates anymore by getting them to say things they won’t miss about each other which causes an epic fight, and Chandler finally finds a way to lose the $1500 to Joey by making up a fake card game only to discover later that Joey lost the money to Ross playing the same game and this proving Joey’s theory that beginners luck is very important in Cups.

Chan Man Quip of the Week – [The Setup] Phoebe and Chandler are at Monica and Rachel’s apartment talking about Chandler moving out from his apartment with Joey. Phoebe asks, “So is Joey going to have to give up the apartment?” Chandler answers, “No, I hope not! I tried to offer him some money, but he wouldn’t take it.” Phoebe continues her inquiry, asking, “Well, how much do you think he needs?” Chandler responds, “I figure that $1,500 would cover him for a few months, ya know? But I have to trick him into taking it so I won’t hurt his pride.” Phoebe offers up a suggestion as only Phoebe can, brainstorming, “Why don’t you hire him as an actor? You could have him dress up and put on little skits. Whatever you want.” [The Knockout] Chandler responds with sarcastic exuberance as only Chandler can, replying, “Well that would help the pride thing.”
​
#TheChickAndTheDuck