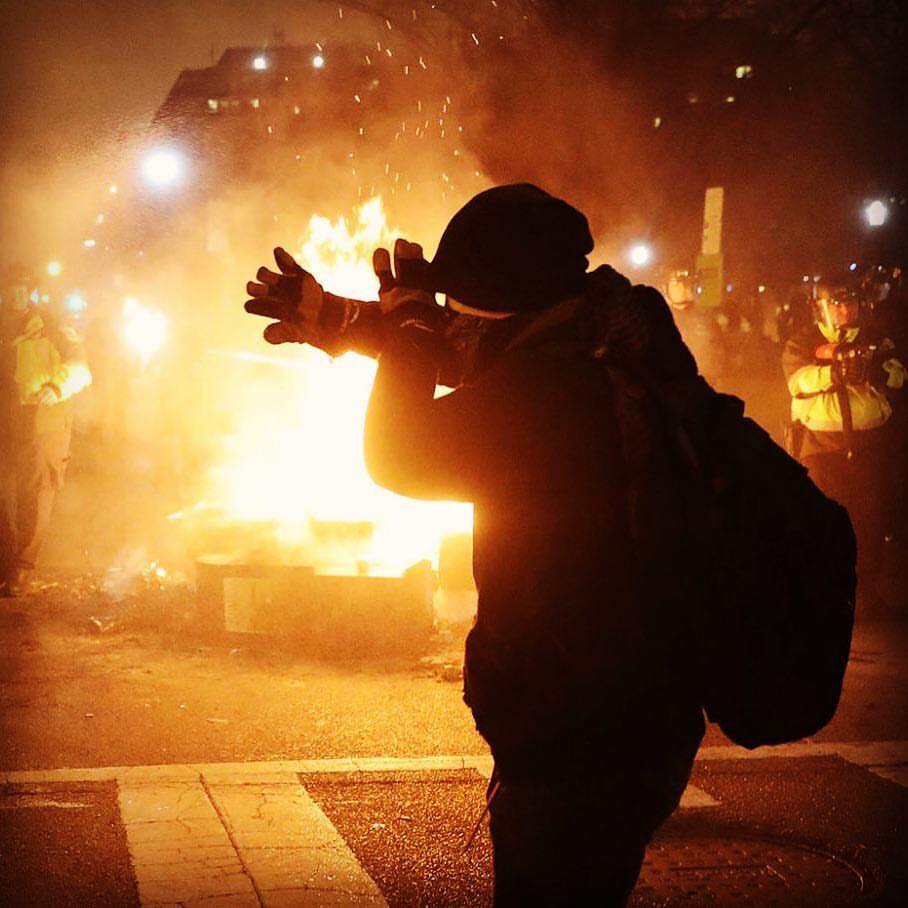 My wife said, he’s like a flame to a moth
Just turn it off, they’ll be feeding at the trough
I said turn it off or I’m going to bed
But we’re still waiting on Wisconsin and she’s gonna pull ahead
Dead wrong, somehow I lost my perspective
I never could believe this sociopath would get elected
It’s getting hard to breath, oxygen neglected
Our values under siege by his bigoted invective
No sleep, mind spinning, so dejected
The example he will set and how our kids will be affected
In deep, our democracy too unperfected
When every fourth time we vote the will of the people’s unreflected
I know this is a complete disaster
The planet is warming and drop dead is coming faster
To hell with the warnings, our destruction met with laughter
When he’s tweeting it’s a hoax to play his puppets like a master
Fake news, alternative facts
Jenn comes out the room suffering a panic attack
There’s no turning back, the racists took the country back
Obama’s decency now martyred for the sin of being black
The vibes like a funeral, feel like I need to call a florist
How can Republicans not see? Donald Trump is a tourist.
Born rich con-man, blowhard at its purest
I guess snake oil sells to poisoned hearts and minds malnourished
Jenn Jenn asks me to rub her back to make the anxiety subside
She says she wants to pack and get to the Canadian side
But she knows we won’t do that, in the struggle’s where we reside
We’ve gotta stay and fight to make it past 45

I’m tryin’a awaken the spirits of millions more to come
Xennials can see the future downloading the truth over some drums
We believe in the children, listen to the kids, bro
The economy is rigged and oligarchy is a shit show
Why in Christ’s sake can’t you hand over the reigns?
Four more years without a pivot, what kind of future remains?
This shit’s insane, got a pistol to the brains
Of the kinfolk that sustain, straight up sentencing life to pain
Jenn is ABD with a pile of student debt
Works 200 hours a month for a 1000 dollar check
Now what sane mind would misconstrue that as respect?
Neoliberals sneaky when y’all dealing from the bottom of the deck
(Bottom of the deck)

(Yo)
The country’s ready to change and your standing in the way
So with all due respect, sorry, have a nice day
Tim Cook, made you look, take a hike out by the Bay
Steve Jobs had a vision, you said how much can it pay?
Tim Sloan should be in prison, the wheels are off & we don’t play
I gotta say, John Legere left Magenta with a pay day like he’s Dre
Now we’re getting #JusticeAtTmobile ? like the very next day
Good thing we organized TU and gave #uncarrier some cache
Now I’m PF Wu-Tang, I’mma ride that to the death
When credit unions act like banks, what we the people we got left?
Delta raking in the cash, said video games are kind of best
Solidarity with AFA, I can feel that in my chest
The Guild kicked off a revolution, and now it’s in the PDX
You’re not granting voluntary? Then we’re cutting off the checks
Just to stress, we formed a movement, now we’re on you like a pest
And if you pull a Cenk Uygur, don’t claim Bernie from your set

The movement isn’t Bernie, he told us it is us
And I’mma fight for us forever, call me Bernie or bust
We should be in sunny Hawaii at a luau, just us
Instead we’re holed up in the booth trying to make the system bust
We love to travel together, that’s what gives us our endurance
Then they grounded us to a halt cause they’re ill prepared to cure this
Sometimes a world in crisis let’s us know who’s a purist
It might also let us know if Joe Biden is a tourist
So, yes, we’re calling on us all to fight back, utilize
If your Facebook is your ego, make it a tool to organize
The digital is open, question is, who wants the prize?
We can transform the country, all we got to do is rise
To the moment that we’re in, we should try to stick together
There’s people lonely, people hungry and in the streets seeking shelter
There’s people contacting a virus that will not get better
To them we say we’re in the fight, solidarity forever