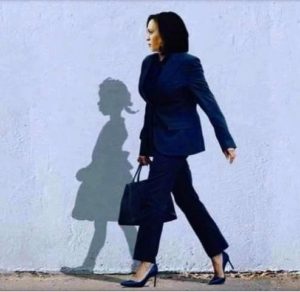 Friends S7:E6 – Friendinistas, I am so pleased to report that as we gather here today in Week 199 of The Resistance, the nightmare is finally drawing to a close. We are being stirred awake by the radiant warmth of the first alpenglow rays of light from dawn’s palette. Soon it will be morning again in America. We did it! On Saturday morning, three and a half days after the polls closed on Election Night 2020, Joe Biden was elected the 46th President of the United States of America ?? and Kamala Harris was elected the first female, black, and asian American Vice President of the United States of America ?? Consequentially, Donald Trump, the immoral president in American history and his super fly vice president, Mike Pence, will be vacating the White House in 72 days. Yo…guess what, y’all? We just made it passed 45!!! In our bitterly divided America, Election 2020 was alarmingly close. Joe Biden will ultimately win the Electoral College handily and leads the popular vote by nearly five million votes (to date) but his margins in several key battle ground states are razor thin. There is no doubt that a racist, immoral, self-consumed born rich conman was very realistically within striking distance of threading the Electoral College needle to reelection. That is a scary, scary thought. Nevertheless, a win is a win is a win. Thankfully, the progressive working people’s movement came out in force to drag the corporate Democratic establishment across the finish line so that the non-deal-with-the-devil-making American public can collectively breathe a sigh of relief. Don’t worry, those of us in the progressive working people’s movement are not expecting a thank you from the Democratic Establishment (I think they already misdirected that towards The Lincoln Project). We know one is not forthcoming. We, instead, can bask in the reverence of the history that was made on Saturday to elect the first female, black, and asian Vice President (reflected in today’s wonderful headline image created by artist Bria Goeller) to move us one step closer to perfecting our Union.

I know a lot of the President’s supporters (who are our fellow Americans) are hurting today and so (as tempting as it is) I won’t do any extending gloating. We need to be preparing to reach out to white working class voters and try to share with them a vision of why the union movement can deliver for them economically in ways President Trump, despite his promises, never did. Extended gloating right now would only make it harder to get through to those Americans when it’s time to have those conversations. Having said that, I will also say this to the elected officials inside the Republican Party and the former and current appointed officials in the Trump Administration (who have been in a transactional relationship with Donald Trump for the past four and a half years because they have chosen to put their own pursuit of power and political interests ahead of the good of the country and the American people)…remember how the American people came out in record numbers on Tuesday to repudiate your immoral alliance and your despicable behavior; remember it for the rest of your historically tainted lives. Much like Ross and Joey’s plutonic and nonsexual yet still obviously inappropriate nap arrangement, you knew what you were doing was wrong. Your integrity is forever lost and when this chapter enters our country’s historical record, you will be judged harshly forever for you inappropriate and immoral alliance with Donald Trump. Over the last four and a half years, you were elephants first and Americans second. You are a disgrace. We will not let you forget that. And also don’t forget the ice cold repudiation of everything you’ve compromised that came with the announcement on Saturday that Joe Biden has won the 2020 presidential election. We will not let you forget that either and we will not stand for a return to obstructionism in the coming four years. Don’t ever forget, retched elephants, you sold your souls to Donald Trump in pursuit of power and now you have to live the rest of your lives rotting in that tarnish. Elephants, never forget.

Finally, for anyone who has noticed things being a little bit difference here at theLeftAhead in 2020 (specifically since the pandemic hit in March), you deserve an explanation. I think the best way to put it is to quote our Editor-In-Chief, Ted James, when he said in his recent Election 2020 post, time is an illusion. Loyal Friends 20/20 readers, your homework is to chew on that until we reconvene again “next week.” Until then…be best.

Recap in the Key of Phoebe – This is the one where Ross and Joey fall asleep on the couch together watching Die Hard, Monica devises a scheme for her, Phoebe, and Rachel to rotate being Maid of Honor for each other but for her not to have to choose her own Maid of Honor by making Phoebe and Rachel decide, Chandler is forced by Monica to face his camp girlfriend, Julie Grath and apologize for breaking up with her for gaining weight, Phoebe and Rachel’s decision devolves into a contest that is judged by Ross and and Joey, and all of the judging wears Ross and Joey out seducing them to recreate the greatest nap ever but unfortunately for them, much like a group of Republicans holding a Saturday press conference at the Four Seasons Total Landscaping on the outskirts of Philadelphia, Monica, Chandler, Rachel and Phoebe some how wonder over and, as we all know, elephants never forget.

Chan Man Quip of the Week – [The Setup] Monica arrives home from brunch and informs Chandler about a weird encounter during the meal, recalling, “Yeah hey, a weird thing happened today when I was at brunch. This woman overheard that I was marrying you and-and then she…she wished me good luck.” Not sensing the tone, Chandler replies, “That’s sweet.” Making a second attempt, Monica emphasizes the sarcasm with, “No, it’s more like…GOOD LUCK.” Now intrigued by the mystery, Chandler asks, “So uh, what did this woman look like?” Monica briefs him with, “She was like 30, dark hair, attractive.” Warming up his quip-tastic vocal chords for the aria to come, Chandler asks, “Well, is there any chance you were looking into a bright, shiny thing called a mirror?” Monica, not amused, brushes past by questioning, “Come on, was it somebody maybe you dated in college?” Chandler responds, “No, no I only dated two girls in college, both blonde, both not attractive. Hold on one second; let me check this out.” As Chandler gets up to grab a photo album Monica asks, “What are you doing?” After bringing the album over, opening it, and pointing to a specific photo, Chandler asks, “Well, let’s see. Okay uh, is that her?” Astonished, Monica proclaims, “Oh my God yes! Who is she?” Seemingly pleased with his ability to identify the person in question quickly, Chandler reports, “Julie Grath, my camp girlfriend.” Lobbying the softest of softballs right up, hanging over the plate, Monica asks, “Did you break up with her?” [The Knockout] Chandler Bing, the Luciano Pavarotti of quippage, smashed that question over the right field fence, responding, “No, we’re still together.”
​
#TheChickAndTheDuck