The Sanctity of the Written Word 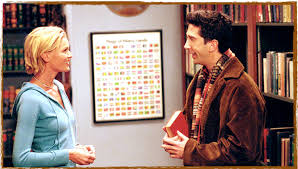 Friends S7:E7 – Hey there, sports fans. Now that we’ve gotten past all of that election craziness, I thought it might be nice to take a week off from politics. How does that sound, class? Okay, cool. Since we’ve established that today’s post will be a politics-free zone, what is one thing that allows you to take your mind off the craziness of the political moment that we’re in? For me, why it’s sports of course. In fact, combining sports with the sanctity of the written word” happens to be one of our specialties here at theLeftAhead. That being the case, today’s episode got me thinking how crazy it is that the Subway Series between the New York Yankees and New York Mets was more than twenty years ago. We know this because Joey and Erin argue about it while they’re dating (Joey is a Yankees fan and Erin is a Mets fan). Aside from it being lame how the Yanks were “buying” championships in the late 90’s and early aughts, this is just tripping me out because I that time like it was yesterday so the fact that it was twenty years ago is really making me feel old. Way to go, sports. You’ve managed to find something to make me as anxious as thinking about politics would. Nice going.

Okay, since my original line of thinking for this post just blew up in my very own face, maybe we should shift gears and talk about how hilarious it is that the Paleontology section of the library on Ross’s university is the make out spot on campus. I really appreciate how much this bugs Ross that people are “rolling around” in front of his book. The fact that Joey (the last person you would expect to know the layout of a library) knows how to describe where it is from personal experience is pretty freaking funny. Monica and Chandler popping in at the end of the episode to try it out is also a nice touch of humor. The funniest part of all, though, is of course when Ross and a woman who read his book get busted themselves after Ross had made such a fuss about defending the “sanctity of the written word.” Simply epic.

The Rachel and Phoebe playing matchmaker for Joey plot line and the Monica and Chandler dealing with Janice inviting herself (and Clark too) to there wedding both contribute to make this a well-rounded fun and funny episode. One thing that stands out to me as relatable during the Rachel and Phoebe matchmakers extraordinaire experiment is when Rachel tries to impress Joey that Erin drank two beers at lunch and Joey’s first thought is to ask angrily if it were two of his beers that Erin drank. That one backfired on Rachel just as it would on anyone who tried to impress me by informing me that someone has drunk two of my beers upon returning home. (Kenny doesn’t share beer!) This episode is also the first time that Monica and Chandler have to go to the “Chandler still has feelings for you, Janice” well but it certainly isn’t the last (foreshadowing is fun). Finally, who in the hell is the guy standing in Monica and Chandler’s kitchen when Janice is over informing them that she’s spending the night? How’s about you chew on that this week, class? Let me know what you come up with when we reconvene next week. Until then.

Recap in the Key of Phoebe – This is the one where Ross discovers that people are fornicating in front of his doctoral dissertation in the Paleontology section of “the biggest library in the university,” Joey asks Rachel to tell Erin (a woman he hooked up with at their apartment) that he’s not looking for a serious relationship, Monica runs into Janice while Janice is eating at her restaurant and is forced to inform Janice that she and Chandler are engaged, Phoebe and Rachel convince Joey to give Erin a second chance and then have to make him pancakes after Joey falls for Erin but Erin decides she’s no longer into Joey, Chandler has to pretend that he still has feelings for Janice when Monica determines it’s best way to get Janice to not spend the night at her and Chandler’s apartment and also not attend their wedding, and Ross gets busted fornicating with a woman who read his book while guarding the sanctity of the written word.

Gandalf Gaffes – Super short and sweet Gandy (should we make that a thing or nah?) to document in this episode. When Ross is talking to the woman who read his book while he’s defending the sanctity of the written word, she comments that he looks so young (compared to how she pictured him while reading his dissertation). Ross responds by informing her that he skipped fourth grade. We know two previously established facts that make this impossible: 1) Ross is “Monica’s geeky older brother” (Pilot: S1:E1) and 2) Monica was a senior in high school when Ross was a freshman in college. He tells this to Elizabeth’s dad to explain away how Elizabeth’s dad thought it was creepy that he took a high school girl to prom when he was a college student (S6:E21). Since the first fact establishes that Monica and Ross are not twins and the second fact establishes that they were only one grade apart, it is impossible that Ross skipped fourth grade. I’m gonna rule this as a level one infraction since it’s entirely plausible that Ross just made that up as a lie on the spot to impress the woman who read his book.

Gandalf Gaffe #27: Ross tells a woman who read his dissertation that he looks young because he skipped fourth grade. However, Ross is Monica’s older brother and was one grade ahead of her when they were in school so the idea that he skipped fourth grade would only be possible if Monica and Ross were twins which they are not.

Chan Man Quip of the Week – [The Setup] Monica and Chandler are home after work when Monica informs Chandler that she ran into Janice at her restaurant. Chandler immediately begins to try to comfort Monica, saying, “Oh…My…God! I am so sorry sweetie, are you okay? You didn’t tell her we were getting married, did you?” Monica answers, “Well, she saw the ring.” Chandler continues getting up to speed by asking, “Did she freak out?” Monica reports, “Well, she was shocked when I told her, but then again so were most people.” Chandler agrees in a self-deprecating way saying, “Right.” Monica continues sharing her traumatic experience of getting caught up with Janice by saying, “Well, she actually has a boyfriend, ya know…herself, named Clark. Uh, she also kinda invited herself to our wedding. Clark too.” Alarmed, Chandler asks, “You said no, right?” Not knowing how to admit that she said yes, Monica plays dumb with a “huh?” Even more concerned, Chandler restates his question with “You said no, right?” Monica defensively explains, “Well, she cornered me! She asked if the wedding was in town! I mean, what was I supposed to do?” Needing no time to mull the question, Chandler emphatically answers, “Lie!!! How hard is that? The check’s in the mail! Oh your baby is so cute! [The Knockout] In order to hammer home his point with a mic drop, Chandler reaches into his bag (bag-o-quips, that is) and pulls at the Ross card with, ” I can’t wait to read your book, Ross!!”
​
#TheChickAndTheDuck