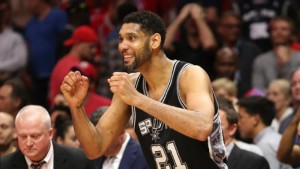 Over – I’m living life right now, man, and this what I’mma do ’til it’s over…’til it’s over. It’s far from over. In One Back (my first blog post of these 2015 playoffs), I predicted that “there are going to be moments of panic and moments of doubt for Spurs fans” during this title defense journey. Man, I wasn’t lying. Last night was intense. I have never been to Disneyland, but somehow I feel like I’ve become a regular visitor after enduring a second roller coaster ride out in Los Angeles in less than a week. My emotions swung back and forth so many times last night that I’m not entirely convinced in the accuracy of what I’m about to report, but somehow, someway the San Antonio Spurs outlasted the Los Angeles Clippers 111-107 at the Staples Center yesterday in Game 5 of the Western Conference First Round series to take a 3-2 lead and put the Clips on the brink of elimination. They say that football is a game of inches. Apparently basketball can be a game of millimeters. There is no question that Bill Kennedy and crew made the correct call in disallowing the tip-in by DeAndre Jordan of a Blake Griffin shot as the ball hung above the cylinder during an opportunity for the Clippers to take a 109-108 lead with 4.7 seconds left in the game, but let’s be honest…that was a lucky break for the Spurs. Both teams played determined, focused basketball and both teams were equally brilliant in last night’s game. We could just as easily have been the team to catch a bad bounce that would have resulted in us being the ones feeling the heartbreak that comes with facing elimination in a close series. Luck was certainly on our side last night. Having said that, we have absolutely nothing to apologize for. Luck is a part of the equation when two evenly-matched opponents square off. It always has been and it always will be. In the end, luck has a funny way of gravitating to the more deserving team. After squandering the home court advantage that we stole on our last trip to Cali in an uninspired Game 4 performance, the Spurs regrouped and earned the opportunity to be in a position for luck to help us steal it right back in last night’s gritty Game 5 escape. It takes remarkable composure to play that well in that environment in that situation. There is no question that we earned the victory and we earned the opportunity to finish off this series at home. On Thursday night, let’s hope we are ready to capitalize on the remarkable opportunity that we earned last night (more on that later).

Okay, campers, rise and shine, and don’t forget your booties ’cause it’s cooooold out there today. It’s coooold out there every day. The player of the game last night was Tim Duncan. What else is there to say about the old man? He never ceases to amaze. Timmy (continuing to upstage Bill Murray in his ongoing portrayal of the Phil Connors character from Groundhog Day) came up huge with a monster 21 points (8-13 from the field, 5-6 from the line), 11 rebounds, 4 assists, 3 steals, and an enormous blocked shot in the guts of the game. With 59 seconds remaining and San Antonio clinging to a 107-105 lead, Blake Griffin got to one of his sweet spots to launch an eight foot leaner (the type of shot that he has been making routinely throughout the series). He was met at the summit by Duncan, who again stripped Griffin after Blake recovered the blocked shot and attempted to reload for another. Boris Diaw snatched the ball after Timmy’s strip and J.J. Redick subsequently fouled out of the game trying to subdue Tony Parker. Tony hit one of his two free throws to put the Spurs up three, which proved to be huge in keeping the Spurs at an advantage once clock management became a factor in determining the outcome of the game. It can’t be overstated how consequential Timmy’s block was in giving us a 3-2 series lead. In the biggest moment of another huge postseason game, the greatest NBA player since Michael Jordan came through in the clutch…again. Groundhog Day.

As we start preparing for Game 6 tomorrow night back home in the comfy confines of the AT&T Center, let us have the wisdom to remember the horrendous effort we put forth in Game 4 and use it as a teachable moment. Our blowout Game 3 victory baited us into assuming that we had broken the spirit of the Los Angeles Clippers. That assumption proved to be disastrous. We didn’t break their spirit then (after winning Game 2) and we haven’t broken their spirit now (after winning Game 5). The Clippers are not only capable of coming right back and taking Game 6 in San Antonio, I’m certain that their mindset is such that they intend to do exactly that. Chris Paul, Blake Griffin, and company will not play themselves out of the 2015 NBA Playoffs tomorrow night, we have to go out and execute our most focused basketball of the season for 48 minutes and eliminate them. The assumption that we can just show up and we will win because we are at home and we’re the Spurs is as ludicrous as Doc Rivers’ assumption that every single member of the basketball viewing public didn’t simultaneously roll our eyes last night during his post game press conference when he stated, “I don’t complain much.” The dream of back-to-back Spurs championships has been a torturously elusive one. Each and every Spurs title defense prior to this year has gone down in flames in heartbreaking fashion. From losing Timmy for the playoffs in 2000, to .04 in 2004, to Manu’s foul on Dirk in 2006, to the league admission of a missed foul call on Brent Barry in 2008, San Antonio fans know that we are far from out of the woods when it comes to an opponent as talented as our current one. Tomorrow night, we cannot face the Clippers as a team that we have gotten the better of over the past five games. We must face them as the gatekeepers standing in between a city and its pursuit of a dream. The #BlackAndSilver have a dream to catch for the Alamo City and as deserving as Los Angeles is of taking the next step as a franchise, if we play with one goal and one mind tomorrow night, the Clippers’ evolution will have to wait for at least one more year. If the Spurs can channel The Beautiful Game and come together for a single purpose in Game 6, then the Clippers faithful will wake up on Friday and have to come to grips with the fact that they simply just had the dumb luck of running into a dreamcatcher in the first round. Tomorrow, we need to forget about merely chasing this elusive dream. Tomorrow, we need to go out there and start our sprint to catch it.

Previous post: Joseph Stalin is the Fiddler on the Roof