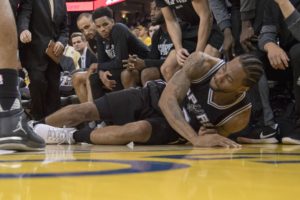 Until the End of Time – In their hearts, they know. Not to say that they care (vultures rarely do) but they know. The Golden State Warriors (the boastful sports ambassadors for a sinister darkness that has taken root in American culture, an epidemic that from here on I’ll refer to as the Gluttony of More) know that if Kawhi Leonard had not been injured…they would be peering up today from an 0-1 hole in the Western Conference Finals while nursing the hangover of having the facade of their precious inevitability shattered. Sure, down 20 points, the Warriors came out of the locker room for the second half of Game 1 with noticeable purpose and played phenomenal basketball. They weren’t going to let themselves get embarrassed at home under any scenario, there’s no question. Even with a healthy Kawhi, this game would have found it’s way to competitive. Make no mistake about it, though. No Kawhi Leonard injury, no historic Warriors comeback. Period. Kawhi was simply too in control of the game to allow it to happen. Nobody knows this better than the Warriors. Already down our second most recent Finals MVP (Tony Parker) for the remainder of the playoffs, through two quarters and change of our first game against the Chosen Ones aka the Invincible Super Team aka Kevin Durant’s Cupcake Factory, it was clear as day: as long as we still had our most recent Finals MVP (Kawhi Leonard) healthy, we were going to beat them. Why was it clear as day? Let’s call a spade a spade. Our one 2017 NBA All-Star was single-handedly outshining Golden State’s four 2017 NBA All-Stars combined. Kawhi Leonard was conducting the game with such precision, he had the Warriors quartet sucking wind. In other words, he was kicking their brass. There is only one player comparison to make in regards to the way Kawhi was dominating Sunday’s matinee before being sidelined. Michael Jordan. It was simply breathtaking. To be able to do what he was doing in Game 1 to a team that features two former NBA MVPs and four perennial All-Stars, Kawhi has officially become His Airness-level dominant. When the player of the game limped to the locker room at the 7:52 mark of the third quarter (after 24 minutes of action), he had 26 points (7-13 from the field, 11-11 from the line), eight rebounds, three assists, and one steal. Oh…and the #BlackAndSilver were beating the consensus title favorites in their building by 23. After Kawhi left, the Warriors immediately went on an 18-0 run and, despite the heroic effort of our remaining players, ended up outlasting the Spurs by two points to win Game 1, 113-11. (We’ll choose not to talk about Kevin Durant’s blatantly obvious double-dribble that wasn’t called and gave his Thunder…err, I mean Stephen Curry’s Warriors an undeserved final–margin-difference-making bucket.) Congratulations on your “historic” comeback, Golden State. It certainly did become easier to beat the Chicago Bulls too when Michael Jordan “retired” from basketball to pursue his passion for whiffing at minor league curve balls.

Before moving on, I want to address the elephant in the room. What the hell is Kevin Durant doing playing in a Warriors-Spurs Western Conference Finals series? You will not talk me off of this corner. Durant’s decision to join the Golden State Warriors last summer (the very same team who just beat his former team in a hard-fought seven game series to earn a trip to the 2016 NBA Finals) was disgraceful. Save me the “he should have the freedom to make the best decision for himself and his family” rationalization. Of course he should and he clearly exercised said freedom. More power to him for it but it doesn’t change the fact that, in making this particular decision, the man cheated the game of basketball. This isn’t a generational new school versus old school thing either (another talking point). Just because Durant is of the coddled millennial generation doesn’t mean he gets a pass for taking the easy way out. Conforming to the adage If You Can’t Beat ‘Em Join ‘Em is perennially a cop out, a coward’s move, a slap in the face of every other franchise player who battles for titles but ultimately comes up short. Kevin Durant’s decision to join the Warriors was, in my opinion, the equivalent of taking a Golden Piss on the sanctity of the game. Of course, I’m sure it’s easy to write this off as the rantings of a diehard Spurs fan who is hating on KD because my beloved squad just so happened to be eliminated by Durant’s last season. In actuality, the appropriate place to file my complaint is in the tough love department. As a former Texas Longhorn (my hometown college team), Kevin Durant was always one of my favorite non-Spurs players in the NBA. After OKC beat us in last year’s semis, I was rooting my ass off for him to win the 2016 title. By the way, I feel bad for the Oklahoma City Thunder fans for the way Durant’s free agency played out (when their title run fell short last season) but this rant isn’t about them or being made for their benefit. I would not have been outraged had Durant left the Thunder and signed anywhere else but Golden State. This is 100 percent strictly about the manner in which Durant’s decision violated the spirit of competition. Competitors don’t join the team that just cut their heart out the year before. They just don’t. If Kevin Durant was dead set on playing basketball alongside Steph Curry, Klay Thompson, and Draymond Green, he would have had my blessing should he have waited to join them under different circumstances than joining them during a summer after they had just beat him. While I won’t waver from the opinion that had Kevin Durant led OKC to even one championship (a la Dirk Nowitzki leading the Mavericks to the 2011 title) it would have meant more for cementing his legacy than winning multiple titles elsewhere, any amount of titles that Durant now wins with the Warriors after joining them under these circumstances is forever tainted. The same holds true for the team he joined. Because the signing violates the spirit of competition, Golden State forfeited something special by joining forces with Durant. They were a championship team of homegrown talent in the San Antonio-mold prior to this season. Now, any more championships that the Splash Brothers / Draymond Green Warriors win after adding KD will forever be viewed through a less impressive lens. Karma is a very powerful thing and may very well forever doom the prospects of these Golden State Warriors, as currently constructed, but let me reiterate: any NBA championships that Kevin Durant and Dub City win together (should there be any) are as hollow and empty as the soul of a venture capitalist.

That being said, the Kevin Durant signing made all of the different in the world for propelling Sunday’s comeback. KD came up huge in helping Steph Curry rally their team back. No matter how hot Steph gets in the second half, last year’s three All-Star Warriors team probably gets beat by the Spurs under the same circumstances (including Kawhi’s injury) considering how poorly Klay and Draymond played. Durant clearly helped put them over the top in Game 1 sans Kawhi but, as stated earlier, the Warriors know that even with their four All-Stars (two of them former NBA MVPs), the only reason they were able to comeback and win Game 1 was because they benefited from how hard starting center Zaza Pachulia plays the game, err…I mean the injury and sidelining of the best player in the world. I’ll let Gregg Popovich’s feelings on the matter speak for themselves without commentary but let’s put it this way…my biggest takeaway from Game 1 is that the invincible Gluttony of More Golden State Warriors have now been exposed. The 2017 Western Conference Finals were never going to be the formality that the “experts” expected. The Next Man Up San Antonio Spurs are here to compete and (regardless of whether or not we are fortunate enough to get a healthy Kawhi for the remainder of this series), the Warriors appear to have more questions than $20 Million Per Year answers. Considering that their four All-Stars played the better part of the second half against a team competing without it’s two best players, they’ve got to be thinking that the final margin of Game 1 was a little too close for comfort. It’s too bad the Warriors didn’t think to sign LeBron James, Carmelo Anthony, and Chris Paul as well this summer in order to ensure that the bourgeois has enough firepower to outgun San Antonio’s proletariat. After all, as venture capitalist and head vulture…err, I mean team owner Joe Lacob knows all too well from his day job, there is no embarrassment of riches too embarrassing for those attempting to buy their way to the top. Welcome to Trump’s America where the ultra rich buy presidential elections so why not NBA championships too? Make no mistake about it. Appropriately located in Silicon Valley (home to a wealth inequality driving, grossly out-of-touch class of neoliberal tech billionaires), the 2016-2017 Golden State Warriors (a team by, of, and for the one percent) are in the closing weeks of a yearlong campaign to buy the 2017 NBA title. Lacob and company are employing vast resources to impart the corrosive values of the Gluttony of More on the National Basketball Association in a sinister attempt to impose their bourgeois dynasty on the rest of us. Ladies and gentleman, the San Antonio Spurs are the last, best hope for America’s working class of NBA fans. Our hobbled and battered proletariat heroes are storming the castle in a heroic attempt to resist tyranny. Win or lose, I’m proud of what the Next Man Up are fighting for and the the manner in which they are representing the city of San Antonio to the rest of the basketball world. The missed Game 1 opportunity was a tough blow, but I believe it to be only a temporary setback. I still have faith (regardless of Kawhi’s status) that if we play the Back to Black championship defense that we’re capable of and avoid the types of costly turnovers that lead to Golden State transition point by protecting the basketball on offense, we can win this series. Go Spurs Go is no longer simply a famous San Antonio Spurs chant. In the tradition of Remember the Alamo, it is now the battlecry for a basketball revolución. History teaches us that the biggest weakness of the bourgeois is that they become so fat and happy, they believe they are entitled to their good fortune and eventually let their guard down. If we are united, patient, and strategic, the proletariat can use strength in numbers (not merely as a slogan) but as a tactic for leveling the playing field. Never ever underestimate the extraordinary things that can be accomplished by a group of organized everyday people.